in Cars, Out of Bounds, STi
223
VIEWS
Share on FacebookShare on TwitterShare via Whatsapp

Today was a nice day so I headed over to the range to test the ONOFF Iron and when I got home I thought I’d play with the car. Both mods today were more electrical mods.  First I removed the standard push start ignition button and replaced it with the red STi one. I don’t know why they don’t just include the STi one as a standard button on the STi but I guess they save it for their limited edition cars. Looks much better now though this is more of a cosmetic change as it has no difference in functionality obviously.

I got around to installing the PIAA Deno 1 LED lamps also which was pretty straight forward. One wire on the minus terminal of the batter and the other in the fuse box on a switched fuse meaning it comes on with the ignition so the lights won’t drain the battery (snapped a shot of the fuse box above in the slide).  As I mentioned these are meant to be day time running lights as cars here in Japan are not required to have day time lights but I prefer them as it makes the car more visible especially in bad weather (even when visibility is bad all the Japanese are driving around with no lights on!). Very nice blue. I was worried how it would match the HID lights and 6700k LED position lamp but it looks good and the car is plasma blue afterall! Took a shot as the sun had just finished setting… very cool. (^_^) 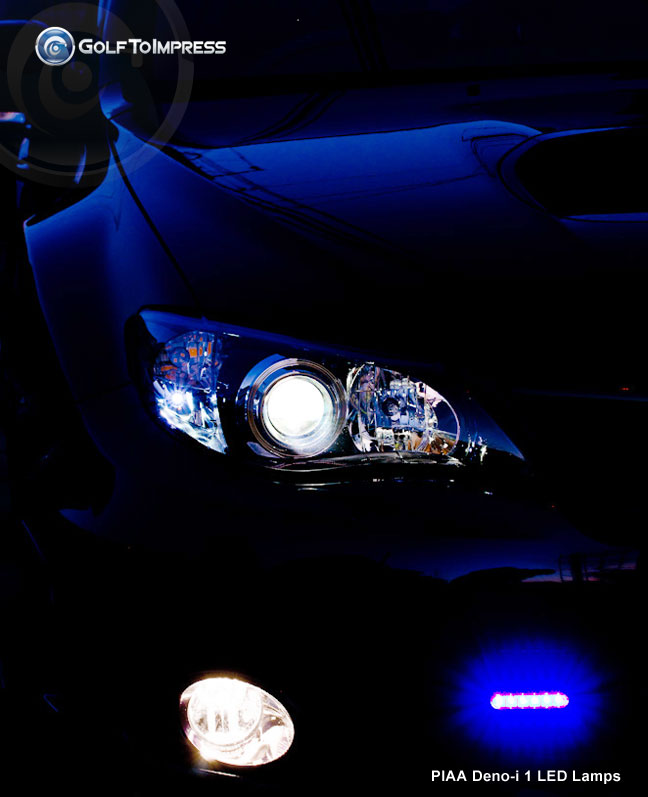 Be no modifying for a few days as I will be at Kings Fields tomorrow for the Hitachi Three Tours season ending even featuring tour pros from the JPGA vs the JLPGA vs the Senior JPGA including Ryo Ishikawa and Sakura Yokomine! Next week need to finish ONOFF reviews and the Ryoma F writeup!