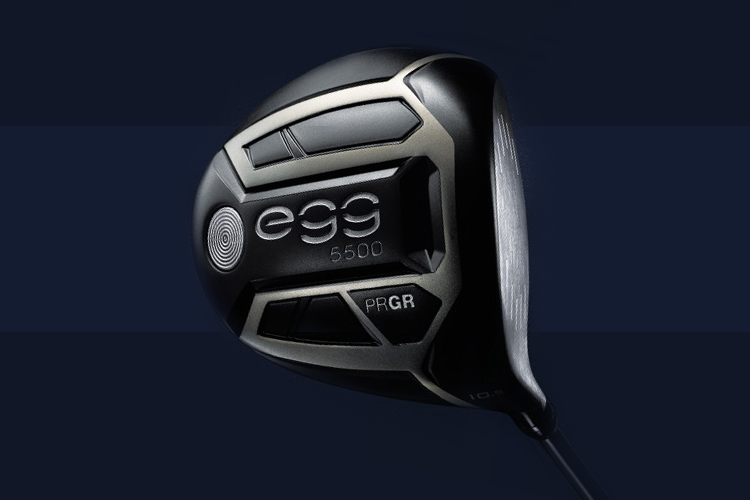 PRGR introduces its NEW egg 5500 Driver and egg 5500 Driver Impact for 2019 engineered to provide unmatched sense of confidence over the ball along with big carry distances.  It’s scaringly easy!!

The egg 5500 Driver features a design that allow players to “capture the ball” at impact with unprecedented ease.  What they mean by “capturing the ball at impact”  is that with today’s larger volume heads,  most amateur players struggle with squaring the face at impact.   The general tendency is to leave the face open at impact resulting in weak impact and transfer of momentum from the head to the ball.  The shot will also directed to the right of the intended target (like a block shot).    By making the head easy to “capture the ball at impact,”  energy transfer from the head to the ball is maximized and results in optimal ball speed in relation to the head speed.  The NEW egg 5500 driver’s advanced CG design allows players to create a square impact with less effort.  PRGR claims that egg 5500 Driver achieved the largest CG angle in the market at 37° while the average CG angle for a driver is 23°.

The egg 5500 Impact driver takes advantage of this very forgiving head design but also goes further with heavier head mass together with a shorter club length at 44.25″ .   The aim of the egg 5500 Impact driver is to allow players to gain consistency in hitting the center of the face more often.   The heavier head weight creates higher energy at impact which helps with maintaining long distance even though the shorter club length may reduce the head speed just a touch.

In addition to making the head easier to square naturally,  the CG distance is  deep (GR: 33mm) and face progression is small (FP: 13mm).  The deeper CG provides easier launch of the ball.   Toe to heel Moment of Inertia (M.O.I) is the largest in PRGR’s history at 5,350g · cm², making it a head that squares easily, resistance against twisting with off-center hits.  A head that is forgiving with maximum distance performance.   The NEW egg 5500 test results shows that the driver has greatly increased its distance performance compared to the previous model egg drivers which has traditionally been one of our top performing favorites among the JDM driver market.  Based on some initial feedback and review,  the sound is muted the right amount and the face provides softer feel at impact.

These both drivers are available at TourSpecGolf.com