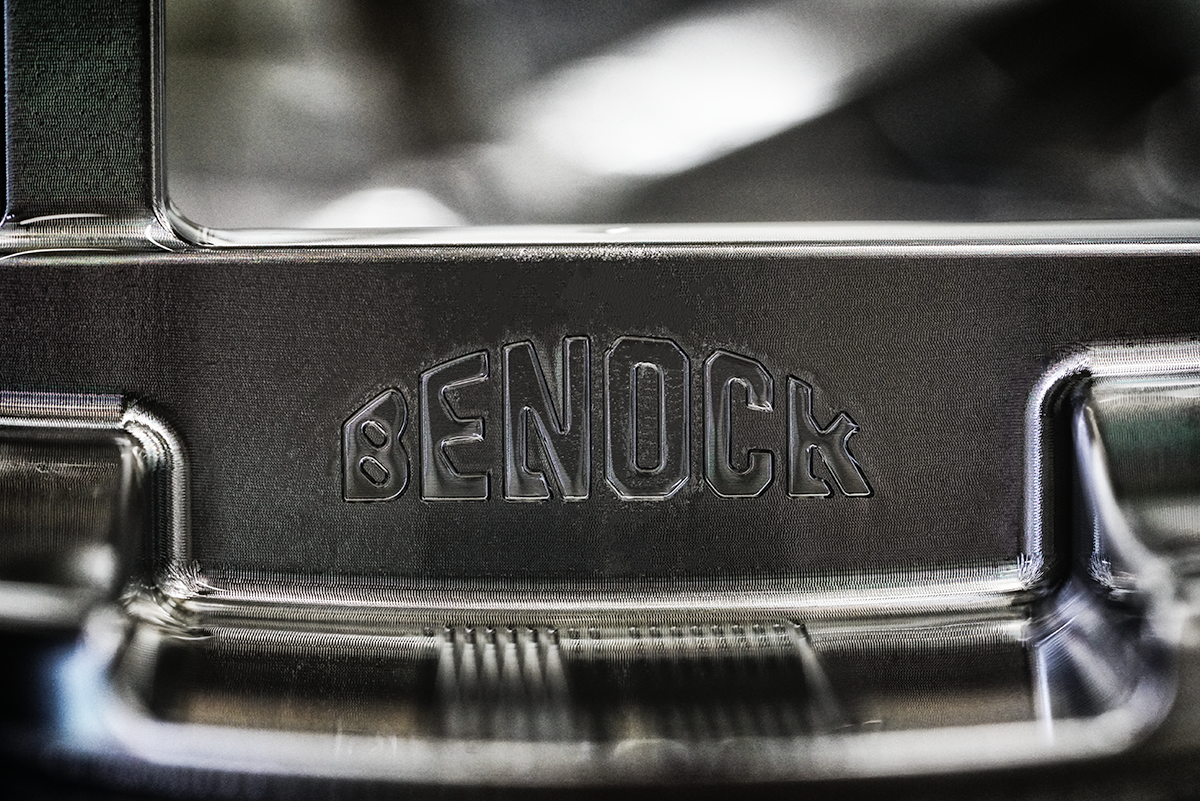 I recently had the opportunity, thanks to Chris, to go thru a full putter fitting at Benock Tokyo!!    “WOW!! ”    I was soooo amazed at how they have set up their fitting facility to help virtually anyone find the most optimal putter specs that works best for them.    As I walked in the facility, I immediately notice their cage/storage for their fitting putters.   Easily 200+ putters on the rack.   Some with the same style & some different but all with different combination of specs.    Mallets,  Blades,  you name it,  they were all there!!   Click here to read more!!… After a quick but formal Japanese style greeting,  Tozono-san who heads Benock’s Tokyo location starts to explain Benock’s fitting methodology called the “Balance Angle” method….  He continued to explain that putting strokes are perhaps the most repeatable movements in golf.      He says that even amateurs have highly repeatable strokes and that each stroke are unique to that player.  Based on their methodology, they visually analyze your stroke in detail, then have you incrementally try putters of slightly different specs to determine a putter with optimum specs that perfectly matches your stroke.      It is just mind boggling to think the infinite combinations of specs you could have with their putters.   Mallet or Blade, Head weight,  Lie , Loft, Length, Toe balance angle, Swing weight,  Shape at address.   And that’s just the specs.   With Benock,  you can also customize the appearance with a long list of options.    Yes, the options all come with a price but it is possible to design a true “Only one in the world”   putter! 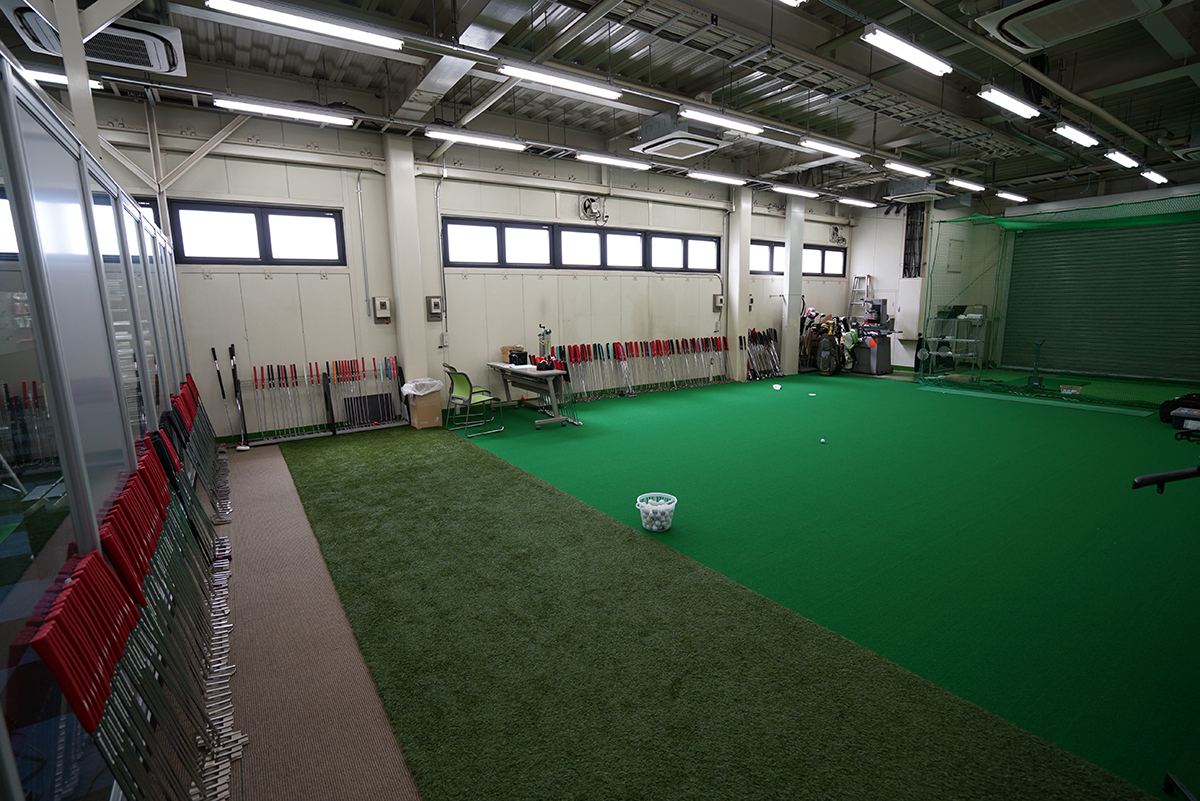 On to the fitting!   The first thing Tozono-san asked was “what type of putter do you use now? ”     So I tell him that I use an older Geo Galaxy putter that looks like a  Scotty “Newport”  at 34.5″ length.    He pulls out one of his fitting  putters that essentially looked like a Newport…   Okay…  familiar shape .. no problem!

He politely asks to start putting on the putting mat with two CCD cameras set up at the hitting area.    The target or the cup was this rather unusual practice device that looked like a decorative object from Star Trek.  ( I later learn that this was a putting trainer designed by Benock )   I putt some balls to warm up and then start to aim at the target.    The camera placed in front of me is recording the arc of the head as it’s taken back and then impacts thru the ball.  On a laptop PC, Tozono-san is looking at the recording which showed length of the arc at take back and the impact location of the face against the ball.    Mine came out to be around 14mm above the sole.    This is considered higher on the face,   and so he determined that we need to choose a head that has a higher sweet spot ( a.k.a center of gravity ) .. which meant that my putting stroke matches better with a blade based on my impact height.     Conversely, if you hit the ball lower on the face,  you should be using a mallet for ideal impact at the sweet spot which is lower for a mallet. Next parameter to analyze; Toe balance angle.     The fitting putter that I was initially given had a 48deg toe hang .   Next he hands me one of the same shape but with a 42deg toe hang.    I asked him what the shape difference was with these two heads.   He tells me the location of the hosel is 1 mm closer to the center of the face on this 42deg version.    Aha!  Very Subtle,  but side by side  I can see the difference.     I also understood that for these two heads,  there are two distinct CNC programs to mill the heads.    Amazing!  After a few strokes, he determined that the 42deg version is consistently returning the head to square at impact.    Alright!   42deg it is!! 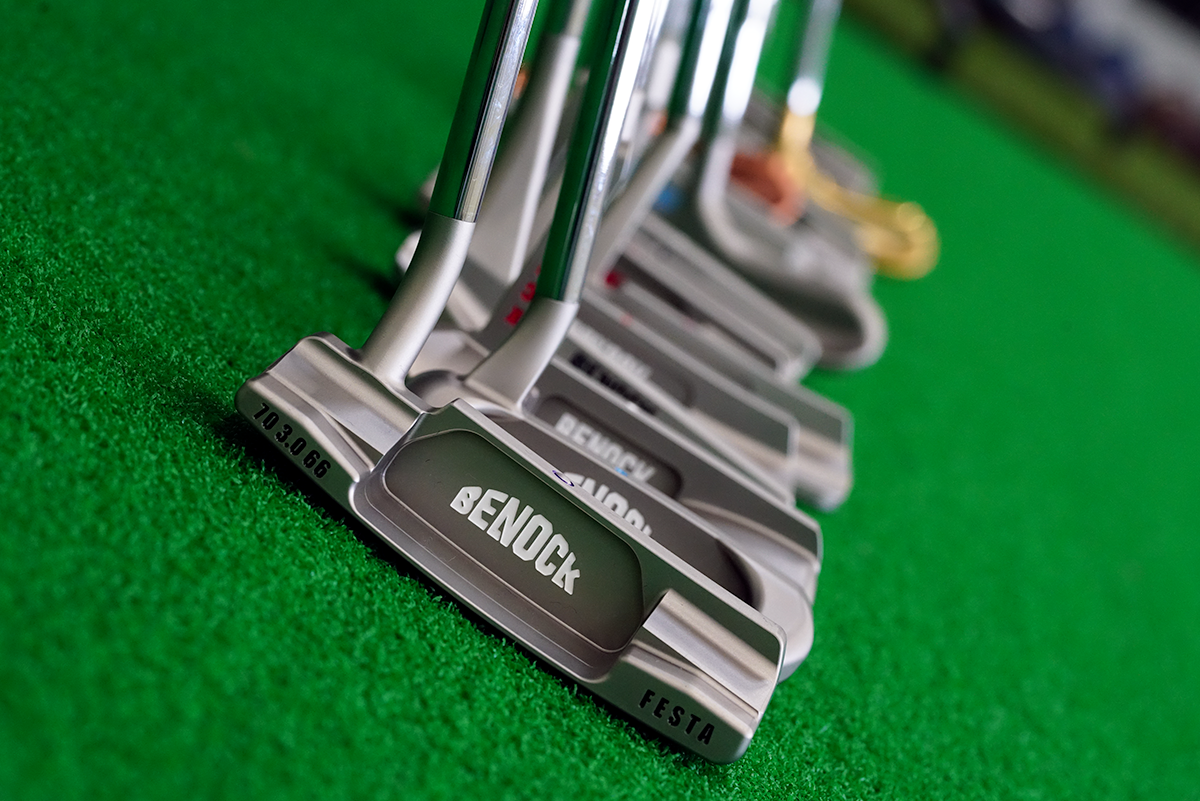 We then looked at the difference between 35″  and 34″  length.   He says that 35″ was a bit too long but 34″ was a bit too short.    He took the 35″ putter to his workshop behind the windows and within 5 minutes comes back with a putter shortened to 34.5″.   This must be how the tour vans operate!!  I am enjoying this!   We figure 34.5″ length is perfect.  Vertical arc at take back is very consistent with this length and impact height consistent.

Next up, lie angle.  The initial putter had a 71 deg lie which is standard.     He then pulls out fitting putter with a 69 deg lie.    He tells me that I have a tendency to set up my stance to the match the lie of the putter.   Meaning that if the lie is at 71 deg,  I tend to stand over closer to the ball,  and when the lie is at 69 deg,  I stood a tad farther from the ball.    Apparently, the 69 deg lie seems to be just right in that it creates ideal room between the putter and my body so my arms can come thru smoothly and freely without feeling tight.   At 71 deg … the stroke does not come back on the original path when I come thru impact.    With the 69 deg it is corrected and the path traces the same arc at take back and thru impact. 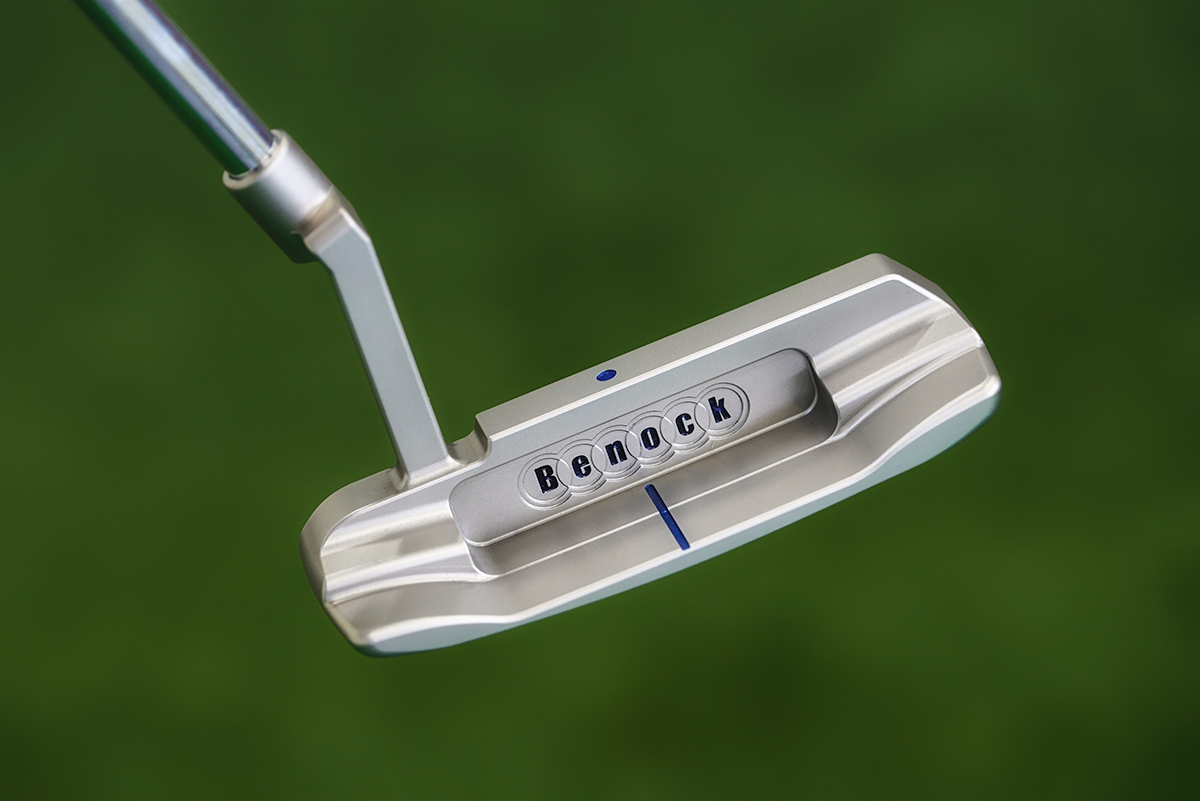 Head weight.  The fitting putter that I started off with had a 338g head weight which was rather light compared to many of the putters I have used in the past.    Tozono-san explains that most people putt more consistently with putters in the 335 g to 345 g range.       My Geo Galaxy has been my gamer for over two years simply because I make the most putts with it.   Before that, I have tried many forms of putters weighing between 350g to 400g hoping to find the right fit for me.     I came across this Geo Galaxy putter on the used market and  have been using it since.   My Geo happen to weigh right around 345g!!    On the 338 g putter at 34.5″   Tozono-san starts to add a piece of lead tape on the head.  Starts with +2g…. then we measure.  No Good.    Then we take 1g off .. perfect!   My ideal head weight is 339g.   Tozono-san explains that my stroke changes a bit even with only 1g of head weight change.    He said it is pretty rare that you see much difference with 1g of weight change.    But hey… I’m a “Sensitive guy!”  :)

In any case,  we are now all done with optimizing the specs of my ideal putter. Now the fun part!!    Shape of the head – depending on how your visual perception works,   you are able to aim at the target better with specific head shapes over others.     Tozono-san pulls out a few different blade shapes,  all which have necks that create a full offset.     He asks me to try aiming at the target as he stood behind me to see how close I am aligned to the target.   After going back and forth,  he indicates the putter that I seem to aim at the target the best:  “Blue Dragon II”  was the model.     Ummmm okay…   It’s a bit different from your traditional Dale head or Newport.  It has rounder edges on the bumper and a notable toe section that is sloped more gradually.    Compared to one that has more of a square toe,   I seem to aim better  at the target using this slanted toe profile.    “Blue Dragon II” also has a beautiful slant neck.    Never really had a slant neck blade…  I asked Tozono-san if this putter can be order with a crank neck.    “Yes, absolutely but a special order option”    Should have seen that coming.   Gave it a few minutes to think and decide that I want something different from ordinary and the slant neck would be very appropriate for this personalized putter.

At this point,  base head design and specs are finalized. Tozono-san went on to show me different finishes and face milling patterns as well as sole milling designs and logos.     Cool,  more choices!!    I needed to give my brain a break from all the decision making and told him that I will take a look at the options later to see if I want anything different from standard.    After returning home,  I decide that I just wanted a pure and simple putter that I can depend on to do its job and to leave off any appearance enhancement options.

So there you have it!   What an eye opening experience it was for me.   My Benock putter is now ordered and will hopefully be in my hands in the next few weeks!!      Really excited about what this putter might do to my game!   What I am most interested now is when I putt using this putter,  I’d essentially have zero doubt about whether the putter is right for me or not.    I know it’s right for me.   That mindset itself may give me a huge confidence boost in how I putt.     Watch out Jordan , here I come!!

Again,  I would like to take this opportunity thank Chris for arranging this fitting for me at Benock and helping me with the ordering process.