I got the chance test the PRGR Red Eyes Pocket multi speed tester on Monday at Katsuura so its time to give some feedback on its operation and functionality.  Pro Gear has actually been making smaller sized swing speed monitors for many many years so the REP (Red Eyes Pocket) which I introduced on the weekend is by no means their first attempt. Because of this the REP actually works pretty well, and compared to PRGR’s monitors of the past is rather compact and not much bigger than some GPS golf navigation units. 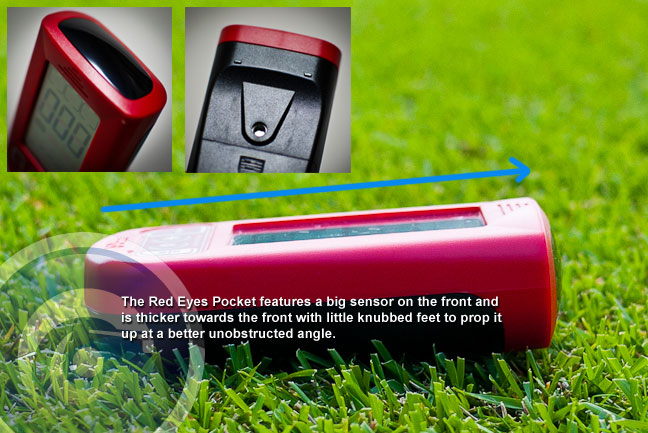 Portable and works with all clubs…

The great thing about the Red Eyes Pocket is not only its small size which allows you to take it everywhere easily, but because it does not require magnets attached to the head of a club to read its speed, you and everyone else in your golfing group can use the REP with any club.  I could go out for a test session and bring 10 drivers with me and all would work just fine with the stand alone REP unlike the Science eye which had to have a magnet on each club.

Using the REP for the first few times, I had to get used to where to place it and how to place it. the first time I used it, the REP recorded the swing speed but not the ball speed. I realized I had it too far back from the tee and too flat on the ground. The “sweet spot” of the REP is right about 1 meter (just over 3 feet) behind the tee and propped up a bit on the front. The REP is thicker towards the front and has little knubbed feet which don’t really do much in the grass but on ranges that use mats would work well. Once set at the right distance and at the angle like in the picture above, it never missed swing speed or ball speed. The unit does not have to be lined up EXACTLY in a straight line behind the tee and will still work fine.

The front of the unit is where the big sensor is to capture swing and ball speeds and you need to be careful not to obstruct its view. Placing the unit in tall grass or where there is debris in front of the REP might cause it to miss capturing ball speeds. It seems to always get swing speed though. Everybody in the group seemed to want to try the REP as they were very curious as to what their swing speed and impact was really like. Of course the first few times, everyone felt conscious of the unit being there and put out some pretty bad swings! (like my first shot off the toe with the iD435 in the previous blog post). However after a while people got used it being there and it was fun or should I say a reality check and shock for some as their measured swing speed was not what they expected. I have a feeling for many, especially those who have never had their speeds checked will be surprised that they do not actually swing as fast as they think they do.

For some REP = Reality Check…

I’ve been on launch monitors several times so I know with my Ryoma which is around 290g I stay right around 40m/s or 90mph. With the heavier 314g iD435 my speed dropped with the REP to around 39m/s or around 88mph which sounds about right considering the slightly heavier driver.  I asked one player in my group what his swing speed before using the REP and he told me around 42-43m/s. After using the REP and measuring his swing he was quite shocked to see he actually swung around 37-38m/s.  That’s a pretty big difference and that’s why the REP is pretty useful. (of course some people might swing even faster than they think – like those players who tell me they swing 90mph and hit the ball 280y)

But distance and performance is not all about swing speed. It’s all about being able to measure your ball speed and ultimately your smash factor or the ability to hit it pure and that’s what makes having the REP great.  Swinging fast is wonderful but if you can’t make good impact and create optimal ball speeds, ultimately your distance and direction will suffer. I was averaging around 39m/s (sorry friends in the West, Japanese players are used to m/s and not MPH so the unit stayed in m/s for the day) and around 96% mid impact or 1.44 smash factor for the day and my distance was about the same as another player who was swinging 45m/s which is nearly 14mph faster than me. The problem is that he does not strike the ball well and creates much lower ball speeds for that swing speed which equals poor mid impact/smash factor.  A player who swings 90mph and has a smash factory of 1.47 can out drive a player who swings 100mph and has a smash factor of 1.40. 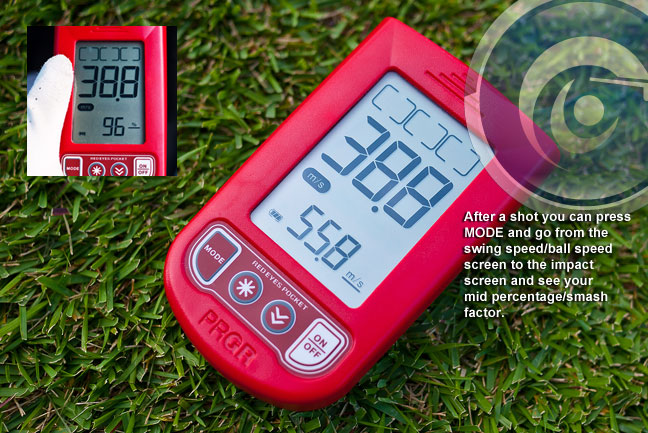 The REP performed admirably in capturing swing speed and mid impact. Mid impact is essentially how well you strike the ball and how close you are to the center sweet spot.  As I had guessed when I first posted on the REP, the mid percentage is pretty much smash factor.  In the above photo I swung 38.8m/s (just over 88mph) and generated a ball speed of 55.8m/s (126.66mph). The REP calculated a mid impact of 96% or what should be a smash factor of 1.44 (96% of a theoretical max smash factor of 1.50).  To see if the REP is correct, I take the ball speed, 55.8m/s and divide it by the swing speed 38.8m/s which equals 1.4381 smash factor.  Now to get the REP’s mid percentage 1.4381 divided by 1.50 = 95.87% or rounded up as the REP does since it does not show decimals for mid percentage = 96%.  Alright for those who do not care about the math, the bottom line is the REP works and calculates the mid impact percentage pretty accurately. You will need a little math if you want to do smash factor but its pretty much like this: 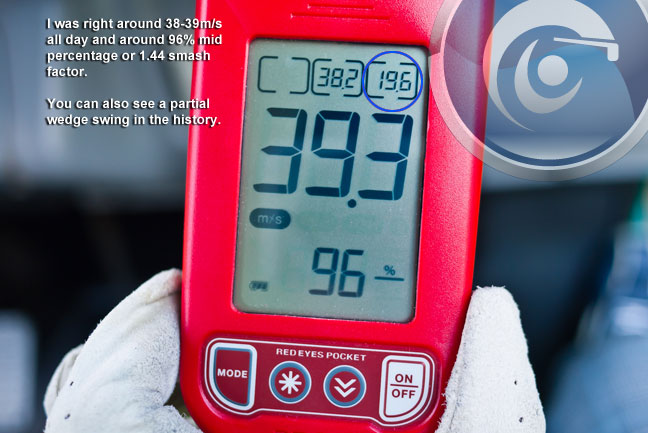 A nice tool for the enthusiast…

Since we were in the middle of a round I did not get a chance to test the 3rd mode which is the partial swing mode. I did use the REP from the fairway to catch a partial wedge swing on an approach and it captured swing speed just fine.  Overall having the REP is very fun, for golf fanatics and enthusiasts who want to know everything about their swing, this is most likely a must have. Its not only amazing for capturing swing speed and ball speed and impact but with this data you can see how your swing performs with different drivers.  You may get the same swing speed on two different drivers but one generates better ball speeds and smash factor. On the other hand one driver that is perhaps lighter and longer may generate more swing speed for you and more ball speed (or less if you can’t hit it well). Best of all with the REP you can see these things and learn from them

I do see myself bringing the REP with me whenever I play now or test and hit clubs at the range. Its a useful tool that tells you far more than swing speed and it appears to be rather accurate. I’ll be adding it to the pro shop tonight. (I have taken photos and written up English Instructions which can be found here.)

– is not rechargeable (uses a 9V battery which probably lasts quite long)
– does not have software of any kind to download your swing data
– after auto shut off it does not retain the mode you were in or any previous shot history (if you were in mph mode you need to switch to it again)
– some people might prefer actual smash factor instead of mid impact percentage
– the red color can be distracting from the corner of your eye at address (should have made it green!)