PRGR sent over its all NEW iD435 driver for some photos and testing. This new athlete model 435cc conforming driver will be released in Japan on October 15th. I had a round at Katsuura Golf Resort here in Chiba yesterday so I brought the New iD435 as the only driver in my bag.  As a matter of a fact I pulled the plastic wrap off right before the first tee off so I had no idea what to expect from the driver. I did not even have the chance to look at any of the specs or design technologies until I got home after the round. Without knowing any of the fancy features behind this new model, I wanted to see how this athlete model would perform for me as an improving average golfer.  So after I got home from 18, holes, I snapped these pictures and decided to sit down and go over the design of this driver so I could properly write a review.

The iD435 is forged at Endo and features its variable thickness face made for soft feel, low spin and maximum ball repulsion. The head is obviously compact and lining the driver up next to my playing partner’s Tourstage 703 Limited confirmed this as it made the 703 look large.  The New iD435 features a mid height face and a higher back crown and overall head.  Since the New iD435 (I just wish brands would rename the damn models rather than just adding the word “New” in front – yes the previous model is the iD435) is aimed at the better player it is designed to promote a strong and penetrating trajectory. PRGR looked at many of the drivers on the market today, and found that a common feature among them (PRGR’s own drivers included) were shallow faces and very shallow long back heads. In their opinion, shallow back heads due to the steep angle back of their crowns can promote and upward blow on the ball launching it higher than desired. While for many average golfers, this is not necessarily a bad thing to achieve max carry, PRGR believed that a better player model should promote a level blow allowing the true loft of the driver to do its work and create a strong and stable trajectory. 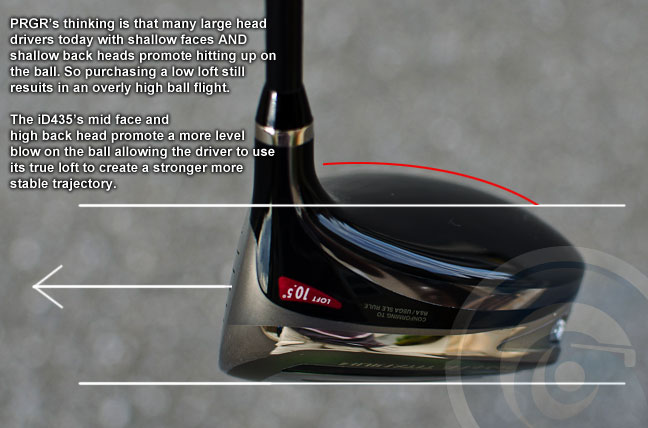 Besides the high back design, PRGR concentrated on the face of the New iD435 which is a premium forged ELF Titanium face. Besides having intricate chemically milled variable thickness, PRGR strengthened the heel area by creating a thicker rib (the “D” area) and increased the faces repulsion power by placing a max flex point lower and towards the toe.  By doing this the exact center of the face is the spot where the highest ball speeds are achieved. In the photo below, I overlayed the face thickness which shows the thickest area actually not being the center but the B area around it.  Hitting the center provides a very soft but almost crisp sounding feel. 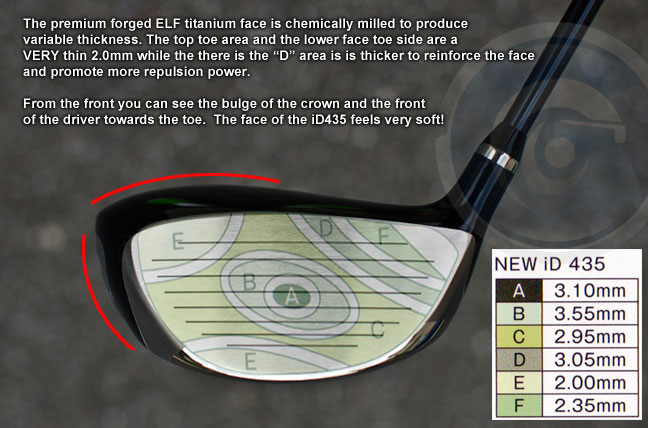 In this next image I added the 3 main points of the face, the CG Point, Face Center and Flex Point. The CG Point and Flex Point help create a large sweet spot encompassing the Center Point and most of the face.  The Flex point is the most flexible point on the face thanks to the E areas you see in the above picture. This creates an almost slingshot like feel but towards the front of the toe. This matched with a short and reasonably high CG point relative to the face height creates quite a strong ball flight, EVEN off the toe (see below)! 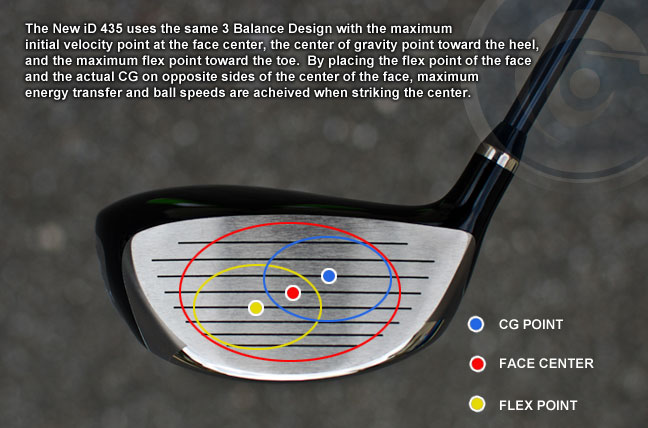 The crown of the New iD435 is also chemically milled to produced a ribbed like ripples in the head for maximum energy transfer. The head is pear shaped and the face angle square. There is not a huge amount of bulge in the face and it sets up very nicely at address. 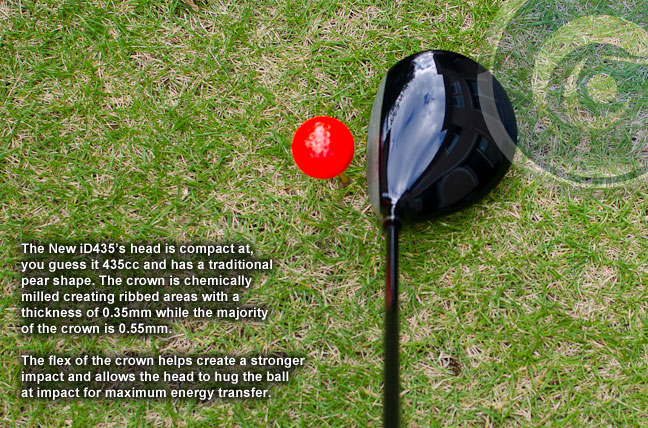 The driver is on the heavier side with the M-43 flex shaft which is rated for 43m/s or 96mph having a static weight of 314g. Though I have been experimenting with heavier clubs I still like the driver around 290-295g so this heaver weight brought my usual 40m/s (90mph) driver speed down a notch (thanks to the PRGR Red Eyes Pocket I can now track this closely). My first shot was actually right off the toe and the REP (Red Eyes Pocket) showed 38.7 m/s (88mph). This goes to show one should actually test a driver or practice with it first before using it for a round unlike myself who unwrapped it for this first shot. Nevertheless the ball went very straight with a very strong trajectory and only about 10-15 yards shorter than I usually hit it. That shot resulted in a ball speed of around 54.7m/s or a smash factor of 1.4134 which I thought was not so bad considering how off centered I hit it – yeah completely off center!

As the day progressed I hit the driver better and my observations are that it produces a very penetrating trajectory even with the 10.5* loft. No high towering shots, but strong balls with good run. The driver was very straight for me and pretty much always in the fairway. With my slower swing speed, I did get a little more aggressive with the driver since it was heavier and it just kept staying straight. The thing that stood out for me most was the feel. It feels AWESOME. Softer than the Ryoma and very Epon like (they are made in the same factory). Compared to the previous iD435, this one looks loads better. While the original was simple and rounded, this New iD435 is more aggressive and high tech looking. I like the way it looks.  I’m not a physically strong golfer so I don’t think I reap the benefits of this driver, nor am I its target audience. Stronger players with swing speeds 95mph and above, looking for a stable penetrating trajectory from a more compact driver will appreciate the New iD435 very much. It looks good and feels awesome and is certainly worth consideration for a place in the bag of any better golfer. 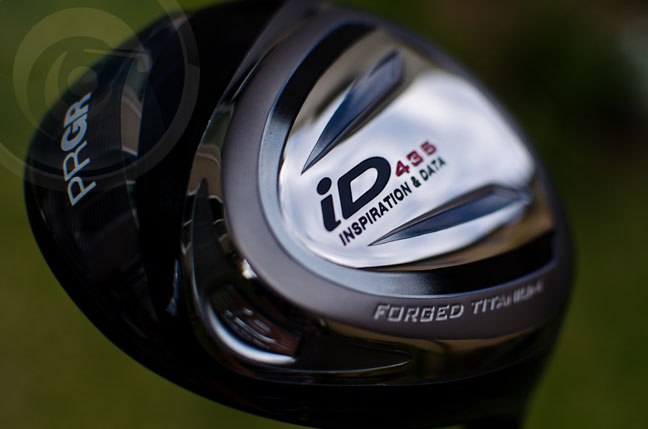 Tomorrow I will try and find the time to do a report on the functionality of the PRGR Red Eyes Pocket speed monitor which was really quite fun to have along. It turned out to be a rather useful tool.