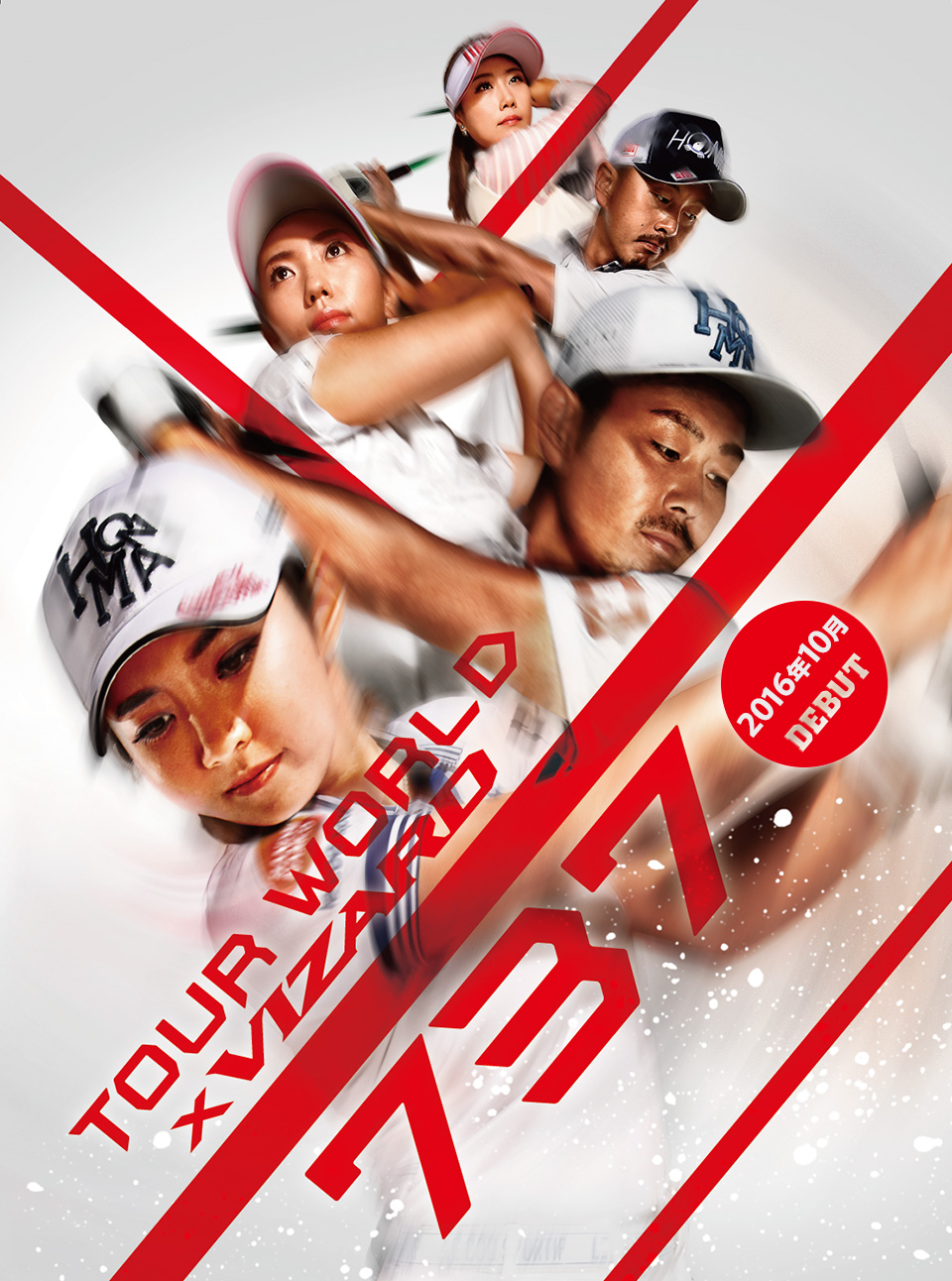 Introducing the all new Honma TW737 Series Golf Clubs! TourSpecGolf recently put the previous model TW727 on closeout sale prices (click here) to make way for the upcoming and all new TW737 series golf clubs. The new 737 may have similar aesthetics to the previous series but every club is an entirely new design from the ground up utilizing lots of new features and technology which Honma is confident will take the new Tour World 737 series to new heights. Follow the Jump for more info and photos… 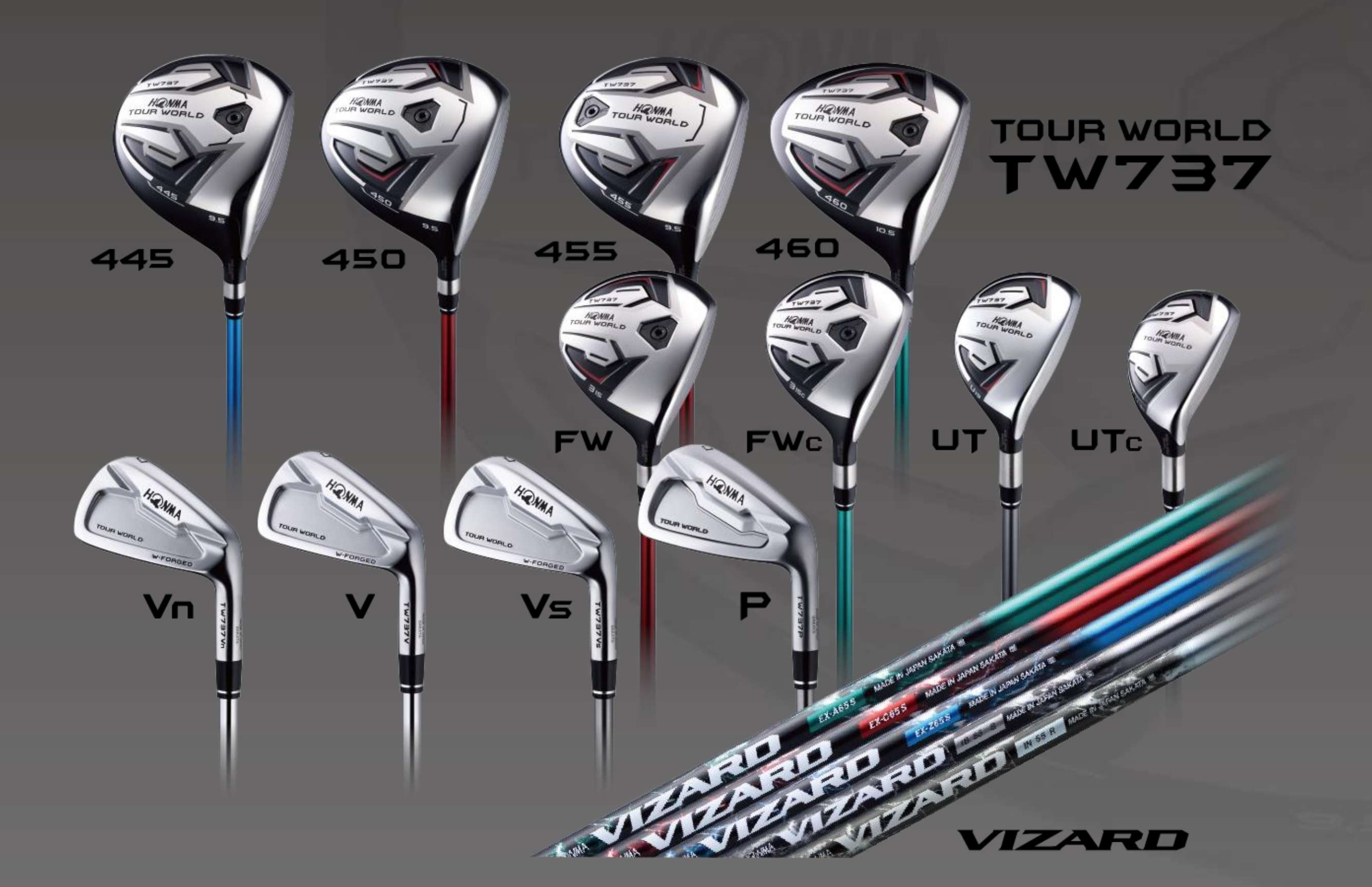 The Honma TW737 Series is made up 4 all new drivers, 2 versions of the fairway and utility woods along with 4 forged cavity back designs each one utilizes Honma’s new W-Forging method. What is not shown in the image above is the new balls, TW series black putters and their new wedges but we will get to those in future posts.

Honma developed many dozens of hand carved prototypes then tested it yes millions of times in order to finalize the final release product. The entire Tour World TW737 Series is geared toward the professional, athlete, and serious player.

Let’s start with the drivers.

4 new drivers each one with a unique shape, center of gravity location, face structure, size and performance attributes. In the image above it shows the 445/450//455/460 each one was specifically designed to cater to different player preferences.

TW737 445 – The 445 is actually 457cc’s with a pear shape and shallow CG depth with it’s core design concepts are high velocity + low spin + anti left bias = you can swing hard and fast. It’s internal weighting caters to the inside out swing path. It’s new grain flow forged cup face is an industry first with the grain flowing vertically unlike other brands conventional horizontal grain flow. specially designed specifically for the 445 model to produce better launch angles, spin, and distance for the athlete player. (click here)

TW737 450 – The 450 has the shape and performance a purist or traditionalist desires. It’s made for workability compared to the one size up 455 which is designed for the straight shot. The 450. It’s forged 6-4 ti cup face goes through a triple heat treatment process that includes press forming and finally a special high density method. This creates unparalleled feel and face rebound.(click here)

TW737 455 – The 455 is all about the straight shot, it eliminates side spin and features a higher MOI compared to the 445 and 450 it’s head is a little more shallow yet longer heel to toe. It’s size is 456cc’s to be exact but its shape appears expanded to promote confidence. The trajectory is medium/high and it is still made to cater to the better player.(click here)

TW737 460 – The 460 is the most forgiving of the 4 drivers, it’s a high trajectory + low spin design. It’s back side is more shallow It’s face is made of a rolled Ti5N material for rapid ball release. The 460 has the highest MOI and deepest CG location of the bunch.(click here)

What I’m trying to get at is each of these drivers are very unique compared to each other. While the aesthetics remain for brand and series consistency each one has a totally different design, manufacturing methods, and even materials and heat processes.

TW737 FW & FWc – One thing you will notice with the new TW737 series is they now include a slightly oversized standard version and a compact “C” model. the difference between the two is in size and shape which creates slightly different performance characteristics. The standard promotes a higher launch and straighter shot, the C is all about workability with a slightly lower trajectory. Both are made using a steel forged cup face with stainless steel body.

TW737 Forged Irons – There are a total of 5 stunning irons in the TW737 line up. The only one missing is the TW-BM Blade which TSG has been selling and announced a few months back. Honma has added the VS model to now sit in between the V and the most forgiving P version. A lot of smart decisions were made, the first is that with the VN/V/VS they all feature the same amount of offset. I know what your thinking, combo set! Perfect! A common request a club expert will hear is: with long irons, I want to hit the ball long with ease and with short irons, I want to have accuracy and precise spin rates I really want a combined set irons, but I don’t want much offset. This is exactly why Honma has evolved the TW737 series into models that play well standalone or in combo. 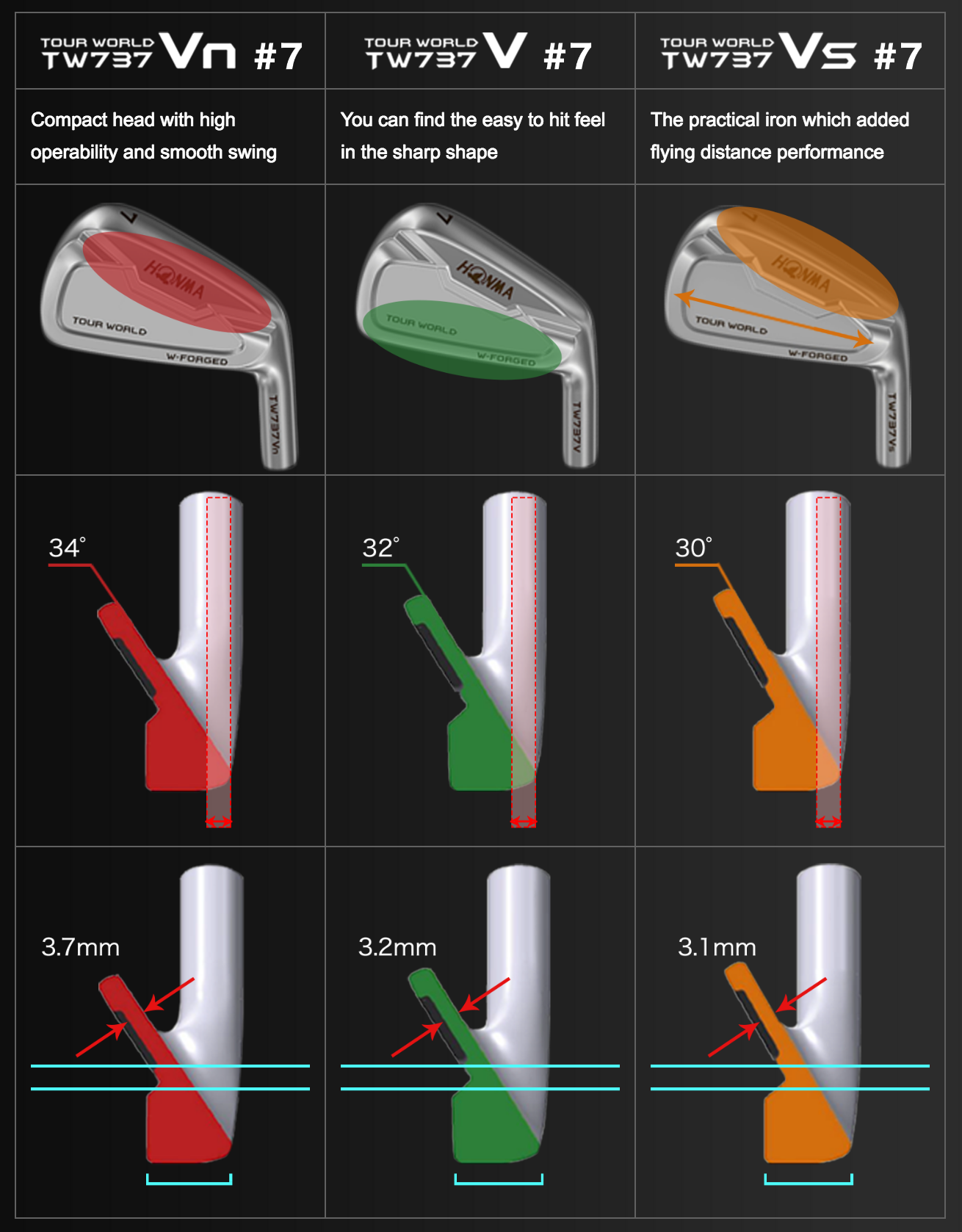 Honma is using an improved W-Forging method using a new and special proprietary blend of S25C. The feel is a soft sensation while the material itself is stronger especially in the top area of the club face where it is more dense. The purpose of this is to make off center hit’s more stable thus more forgiving reducing poor results from a bad shot.

There is one iron I need to talk about separately it’s the TW737 “P” version. I want to separate it because it’s got a little more offset, an undercut cavity, and it is now soft feeling casting. Honma went this direction so they could produce a longer and more forgiving iron that had a touch more size to it. It is still a Tour World iron so yes mid to even professional players can still use it. With the VS sitting below the P one step more forgiving will put you into the BeZeal series then after that slower smoother and senior or ladies players look toward the Beres line up. 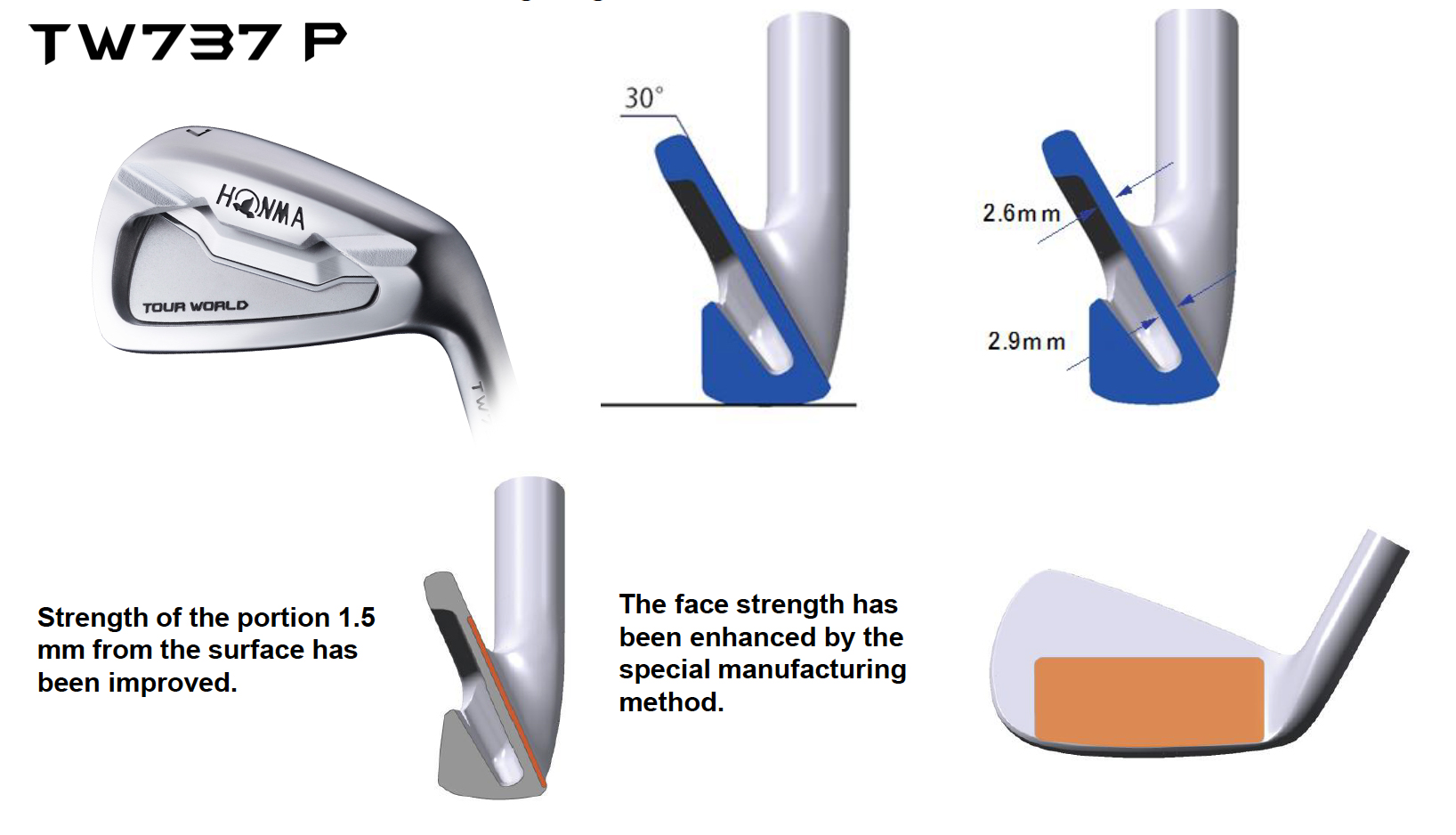 And finally the new Vizard Shafts, these are no joke people. Honma uses steel Torraca’s nanoalloy and T1100G materials along with a heavy metal fiber developed by UNITIKA,Ltd in some of the utility and iron shafts. Some people may think carbon is softer or for the slower swinger and within the Vizard line up that really depends on which weight and flex you choose as some of these carbon shafts are very firm and stout. 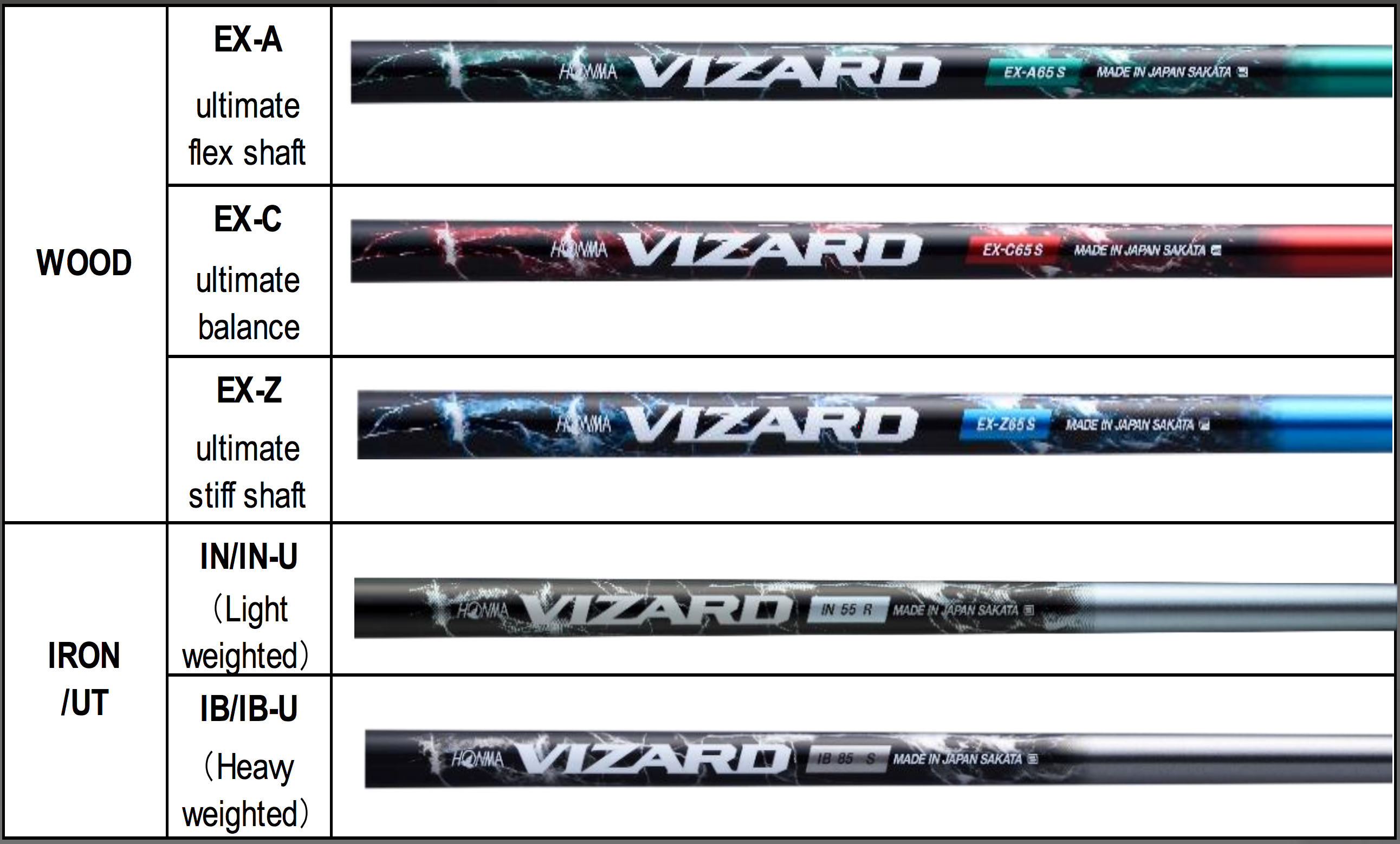 • butt & center are firm with a softer tip section

• The center section is soft with a firmer tip & butt section

• A firmer shaft with great feel produced in collaboration with tour pros, the area under the grip also has thinner walls.

• The center & butt are softer with a firmer tip

• Designed for the player who aims straight for the target and take dead aim. The IN caters to smoother and slower swingers who require lighter weights while the IB is for those who are stronger and require heavier specs.