On Tuesday when I was at the Crazy Factory, besides talking about new products like the CRZ-435II which I previewed in an earlier post, we also talked about current sales trends of Crazy products in Japan. Here are some excerpts from our conversation (translated into English) when I asked Crazy what their best selling shaft and products have been recently:

Me: “So what has been popular in the last couple of months with Crazy customers here in Japan?”

Crazy: “Oh the new Royal Decoration shaft has been our number one selling shaft. It now outsells our previous number one the Crazy Black 46”.

Me: “Huh? you mean the 40 gram range ultra light shaft has been the best selling shaft for Crazy, a company that specializes in hard hitter, faster swinger and long drive spec shafts??”.

Crazy: “Yes, in fact the Royal Decoration has turned out to be one of the best distance and long drive spec shafts we have.”

Me: “Wasn’t the Royal Decoration originally designed and made to provide a lightweight shaft for more average like players and slower swingers? The RD is available in L, R3, R2, R and SR flex!”

Crazy: “Yes it was but, it turns out, its distance capabilities as well as its stability for a lightweight shaft were even better than we imagined when we designed it. Because of this we now offer the Royal Decoration in S, SX, X and XX flex.”

Me: “Wow I see the specs here and X flex is 49g and XX is 51g.  The walls of the shaft must be quite thin in order to achieve these weights. Are there not any concerns with breakage?

Crazy: “No concerns at all. Recently many long drive competitors in Japan have switched to the RD and have no issues at all. It turns out this shaft is stronger than many of the heavier hard hitter models some which use even thinner plys of carbon and are almost glass like due to the high grades.  It is selling well because it has superb feel and kick. It is a very pure distance shaft which is why average golfers and long drivers alike want it. They all want more distance and a lighter weight shaft with superb release and kick will do that”

Me: “At 40-50g won’t the shaft play softer than most other Crazy shafts in your lineup?”

Crazy: “It  is the softest playing shaft we have but you would be surprised at its feel and performance. Why don’t you hit a demo now on the launch monitor/simulator?” 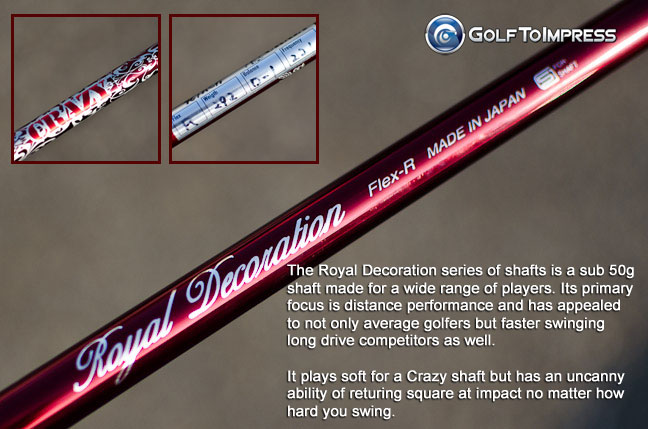 Mikawa-san from Crazy handed me a demo with a Regular Flex Royal Decoration shaft (47 grams and 4.9* torque) in Red (Black, Blue or Red are available) matched with a CRZ-460 10.5* head. The first thing I noticed was the label on the demo had the finished CPM listed at 221cpm at 46″. The static weight was 292g and swing weight D1. Now the specs of this club goes against my whole heavier and stiffer experiment as well as my preference for shorter drivers however it was a chance to test the new shaft and head out so I didn’t really complain.  Right away I noticed in my hands that the shaft did feel rather soft which I proclaimed right away to Crazy. They said, “don’t worry just hit it. This shaft and the CRZ-460 were meant for each other.” The Crazy CRZ-460 was actually launched back in March but this was my first time testing it.  After my first swing I wish I had done so early. 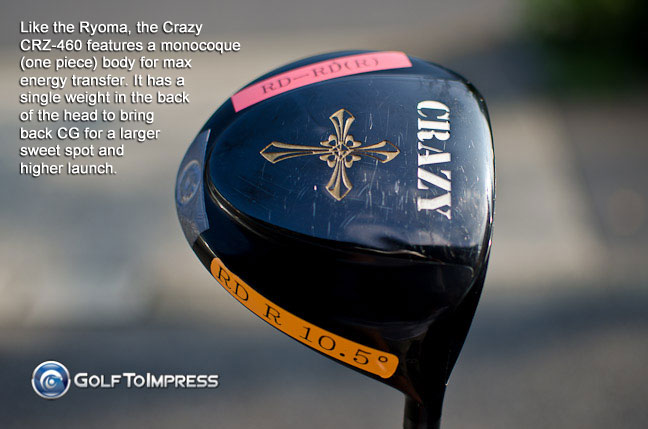 I really don’t know why I did not go out of my way to hit the CRZ-460 earlier. I guess Chris had already hit it and the Ryoma was firmly in my bag that I thought nothing could come close to it, but now I realize the CRZ-460 has been the Ryoma’s rival in hiding.  As I hit the CRZ-460 with Royal Decoration shaft, I swung hard, I swung aggressively, I swung smooth, everything ended up in online and center.  The shaft felt soft but it was so easy to load and kicked very hard at release but always squared up. I could not overpower the shaft nor could I miss even with a 46″ driver which at that length I usually am not good at squaring up. The CRZ-460 felt awesome at impact and while this combo launches higher than the Ryoma distance is just as good as it carries superbly. Now that I think of it, some of the design ideas behind both drivers are very similar. They both are monocoque single piece high strength unibodies which equal fantastic energy transfer at impact. Both feature a single weight in the back of the head though the Crazy weight is not nearly as heavy as Ryoma’s 65g back weight. Both feature high end forged faces for premium feel. The Crazy launches higher and does so on purpose as its meant to launch nice and easy. 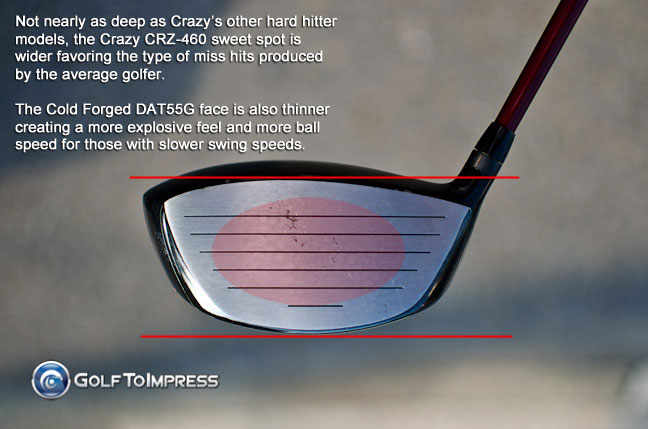 I have to admit I was pretty wowed and excited after hitting this forgiving combo. After about 20 swings I sat back down with Crazy and we continued our conversation.

Me: “After hitting this combo, I have to say, the CRZ-460 is made for the average golfer isn’t it? It is so darn forgiving.”

Crazy: “Of all the driver models we sell, the 460 is best suited for the average player and slower swinger wanting distance. Especially when paired with the Royal Decoration shaft. Really its for anyone who wants an easy to hit and launch driver.”

Me: “I tested your CRZ-435II driver earlier and I could not generate the same ball speeds or carry. It was a heavier club and the face was much deeper and the driver itself was more solid feeling. I felt with my 90mph swing that I did not have enough speed to maximize that driver’s benefits.”

Crazy: “Well the 435 and 435II are certainly better off for the faster and harder swinger. That’s the reason why we call those heads our athlete models. The CRZ-460 on the other hand has been a favorite of more average swing speed players and especially senior golfers who want more distance. They have all been going with the 460 and RD shaft.”

Me: “Well I can see why as its a great combination. Even when I thought my ball flight was tracking right or left it seemed to return to being straight at the end. That’s very much a characteristic that the Ryoma has as well. Also with a long driver at 46″ I find there are always times I can’t square the face in time however that was not the case with this shaft.”

Crazy: “We designed the RD that way. It’s light but has control as well. A typical problem with lighter shafts is that they lack control and sometimes players have to rely too much on timing. With the RD’s high grade carbon and mid to higher torque, the head returns square with a lot of energy on a consistent basis.” 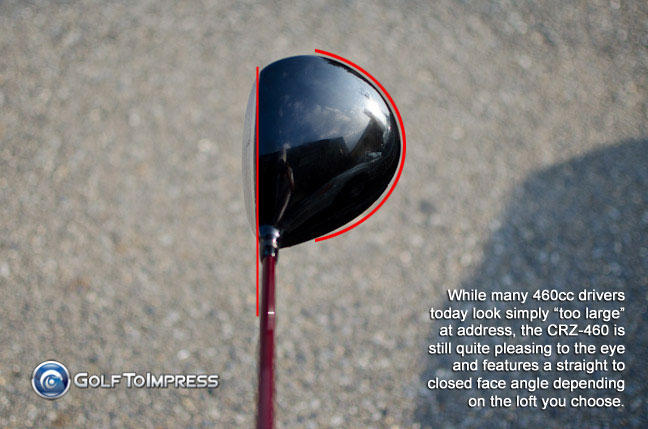 Me: “I can see this being popular with slower swingers and seniors as you can really build a lightweight club. Also it looks very good at address. Its not a distracting big head and it doesn’t have a hook face that a lot of average golfer 460cc model heads do have these days to combat typical slices.”

Me: “That is very true. Recently my bad shot went from a slice to hooks as I became more aggressive and closed face drivers don’t help there at all.  I love the way this sets up. Thank you for letting me try it!”

So there you have it. Our best selling driver Ryoma has some competition in my mind and I am one of Ryoma’s biggest believers.  In fact I have ordered a CRZ-460 with Royal Decoration shaft which should be here next week ready to possibly replace the Ryoma in my bag.  Most people who have been asking me for recommendations on an easy to hit driver that provides maximum distance have usually been getting only one recommendation from me during the last 6 months. Well now they will be getting two. The average golfer will be happy as more choices is a good thing.

On top of that the Crazy Royal Decoration appears to be vying for the title of ultimate lightweight shaft. It is certainly a force to be reckoned with.