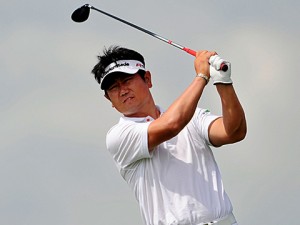 You know that thing that almost NEVER happens?  That thing where when Tiger Woods is leading going into the final round of a golf tournament, he just can’t lose it?  That thing where when it comes to a major, if Tiger has a window of opportunity to win it, he never fails to take it?  Yeah, that thing.  Well it happened.  That’s right, Y.E. Yang, a golfer who only nine months ago was in PGA Qualifying School, upset Tiger and shocked the world when he beat the world’s best golfer and stole the PGA Championship right out from underneath his nose.

How strange a sight to see Tiger Woods hunched over his final putt on the 18th hole knowing that whether or not it went in meant absolutely nothing.  Nothing for good and nothing for bad, just nothing.  How strange to watch him sink that putt and not hear the crowd erupt and Tiger fist pump and watch him hoist the trophy.  How strange and yet how completely exciting, for golf and for Yang.

The victory for Yang came for two main reasons.  First, Yang played exceptional golf capped off with an 18th hole that no one, anywhere, will forget.  His 3-iron approach to the green saved the tournament for him as much as the chip in eagle on the 14th set it up.  Combine this with the fact that Tiger Woods shot the single worst round of golf in the final round of the major when he was in the last group, a 75.  This, my friends, is a powerful recipe for a David vs. Goliath style slaying, and Yang took advantage of it to beat Woods by 3 strokes.  Impressive?  We know so.

Once Yang was interviewed, it became clear just how his mindset going into the final round truly set him up for victory.  When asked, here’s what Yang had to say:

“It’s not like you’re in an octagon where you’re fighting against Tiger and he’s going to bite you, or swing at you with his 9-iron…The worst that I could do was just lose to Tiger. So I really had nothing much at stake.”

Top 10 Courses WE Can Actually Play!