Most people outside of Japan know Srixon as the main brand under the Sri Sports/Dunlop umbrella, however in Japan, Srixon shares the spotlight with XXIO  (pronounced zeh-ku-shi-oh). Both brands receive equal attention but focus on different market segments. While Srixon is mostly know for the better player and athlete golfer, XXIO in fact caters to the largest market in Japan, that being the average golfer and senior player (there are many golfers well in their 80’s here). Japan is a country full of golfers who are willing to pay for technology and premium materials and XXIO casters to these golfers by always offering cutting edge designs and automatic style performance for the recreational player and older more experienced senior golfer.  Because of this the XXIO lineup is year in and year out one of the top lineups when it comes to not only sales but also performance. I’m going to review both the driver and fairway wood in two parts starting with the driver in this post. 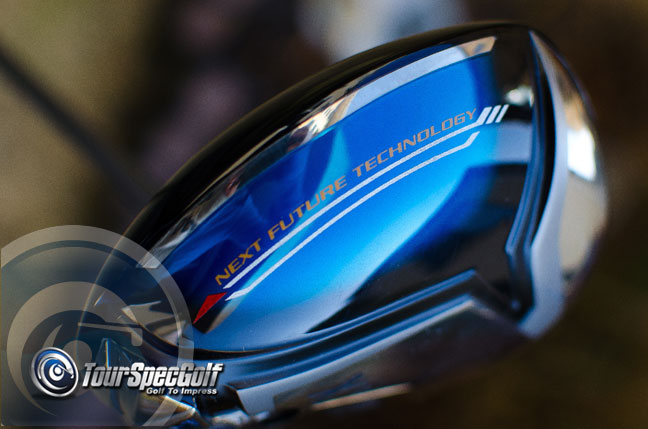 Every two years XXIO releases a new line of XXIO clubs and this year we are on to XXIO7 which as you guessed is the 7th generation. Every year, XXIO tweaks its designs, to incorporate new technology and new materials, all for the sake of improved performance and feel. The XXIO7 driver is a departure from the previous XXIO model. While many average golfer models were moving towards bigger yet lighter heads built at longer lengths to try and gain more distance, the new XXIO7 has actually decreased the footprint of its 460cc head and increased the weight of the head while shortening the length to 45.5″.  These are the kinds of changes I like to see manufacturers do. 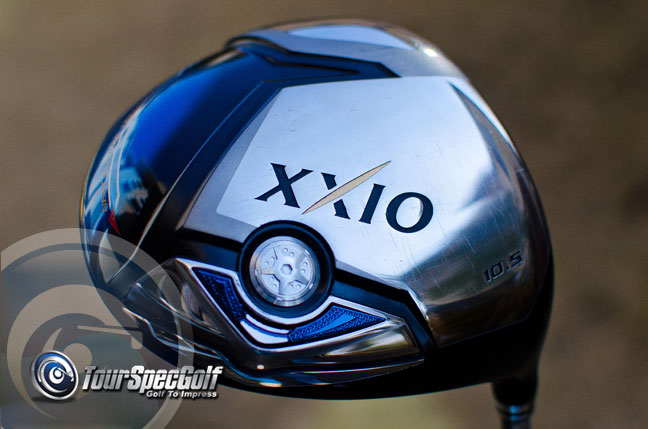 I have always believed a longer driver, while it can produce more club head speed, is also a lot harder to hit squarely consistently. Also with a longer length club, comes a lighter head and overall club weight which may work for some but for others can simply be too light, sacrificing both feel and stability. The XXIO7 with its shorter length increases consistency at striking the sweet spot and with a heavier head and D1-D2 swing weight, creates more ball speed at impact thanks to increased kinetic energy from the heads increased motion and mass. The shorter length of the club has allowed the head to become heavier but the overall club weight is still rather light at just over 280g meaning its still quite easy to swing though for some this could be too light. 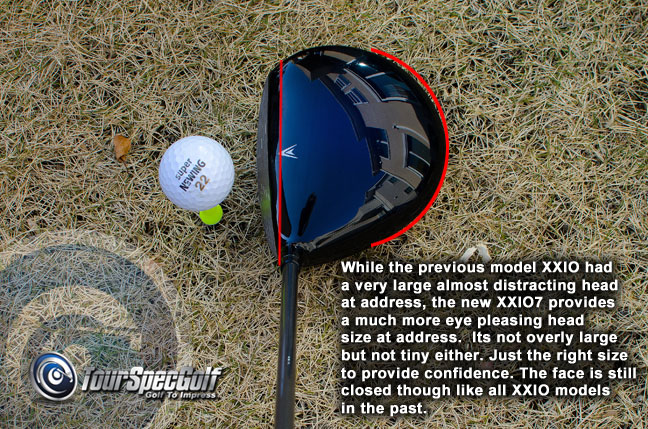 While the head dimensions have change, one thing that has not, is the bias of the XXIO7 and the face angle. XXIO drivers have long been the favorites of average golfers who battle a slice due to there draw biased heads and closed face angles. To help these average golfers straighten out their ball and create more distance, XXIO has introduced a new lightweight Ti body using a material they call T9S.  Even though the head is not nearly as long from face to back the MOI has increased thanks to the lighter body, allowing for more weight to be placed in the sole of the head.  The increased MOI paired with the forged Super TIX titanium cup face (Super TIX isdeveloped by Sri Sports themselves) widens the sweet spot which really aid distance on miss hits towards the toe and heel, the typical misses of average golfers. 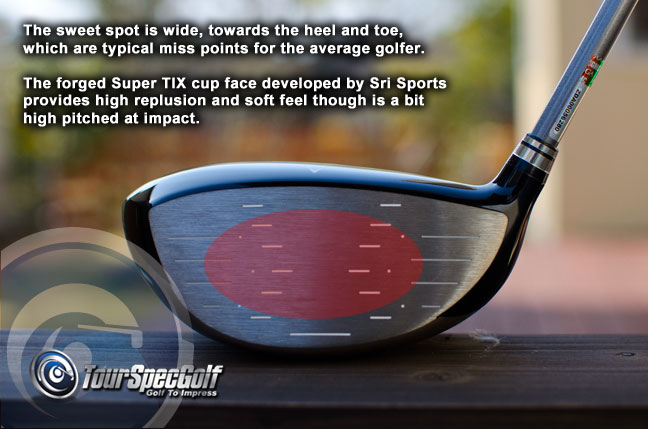 The Super TIX face feels great. It is very springy (this driver is conforming) and the ball seems to jump off the face. As you can see from the photo I took above, the face is on the shallow side and rather long from heel to toe.  It has a crisp but higher pitched sound at impact.  Impact sound is very subjective and some may like it and some may not. Please click on the blue play button below to hear the sound at impact.

I actually like the wat it sounds but there are those players who prefer a more muted solid sound.  The XXIO7 produces a nice soft draw. With its closed face and 3g stainless steel weight in the heel, the head rotates well for a square impact. If you are the kind of player who leaves the face open, the XXIO really does come around quite well, eliminating those weak cuts and open pushes.  The driver is very automatic something older players and average golfers who struggle with consistency can appreciate. Now even though I say, the XXIO7 is aimed at the average golfer, its not to say the improving or more serious and better player cannot benefit from the XXIO7. Interestingly XXIO offers the driver with a VERY broad range of lofts from 8.5* which is a special order up to 12.5*.  The stock shaft is an ultralight at under 50g and does have torque over 5* for all flexes which is meant to produce feel and help players sqaure the face. Because of this, I still would not recommend the XXIO7 for any aggressive player or a player who battles a hook and pull, especially since static club weight is still on the light side which can be a negative for those who rely on heavier clubs to manage tempo. 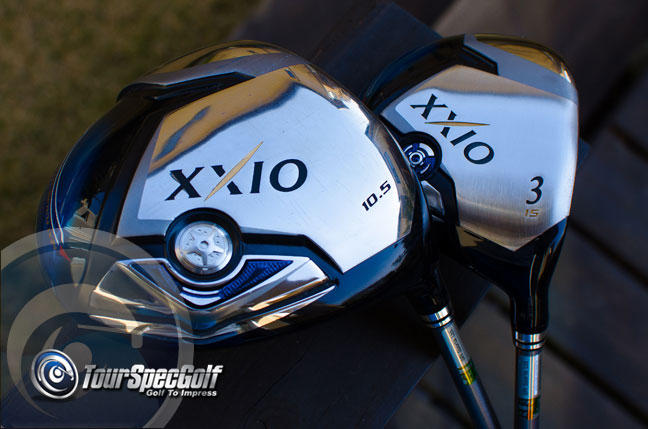 In closing, this driver is very automatic, it produces a higher launch, big carry and has very good feel.  The average golfer and senior player will appreciate its ease of use and easy to swing nature, though harder hitters might want to opt for a stiffer Miyazaki shaft which is an option, though they would still have to take the drivers bias and closed face into consideration. If you are not as consistent as you would like to be, battle a slice and need more distance, the XXIO7 is one of your top choices. Tomorrow I will look at XXIO7 fairway wood which is a great compliment to the driver.

Look for the new XXIO7 lineup in both Right and Left handed models in the pro shop this week!