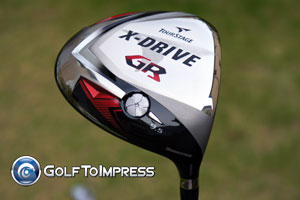 I had the chance to take a quick spin with the new 2010 Tourstage X-Drive GR which was released back in August. Around 3-4 years ago when the GR line was first introduced, it didn’t have a clearly defined position as to where it stood in the Tourstage lineup. Tourstage had decided the GR would be the “more forgiving” X-Drive however this was at a time when Tourstage had simultaneously released the X-drive 460, 460P, 430P and 410P. So there already was that more forgiving 460cc X-Drive which the GR looked very similar to. 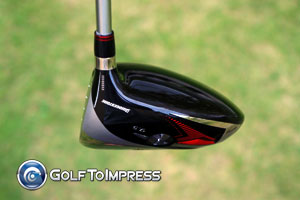 Over the years, the GR line has evolved and finally taken its place as the line for the mid capper and improving golfer not quite ready for the X-Drive and X-Blade lines but wanting a balanced performer for both control and distance. But this has only happened because last year Tourstage had finally decided to stop relying on the standard X-Drive drivers for design cues with the GR line. This years GR driver stands alone with its design with a completely different look and shape from the standard lower handicap model X-Drives.

The new conforming 460cc GR features a shallower and longer head than previous models with deeper and lower CG creating more forgiveness and maximum carry with low spin. The special hybrid cup face has variable thickness with the thickest section being the center sweet spot. This provides a softer feel and sling shot like effect at impact. 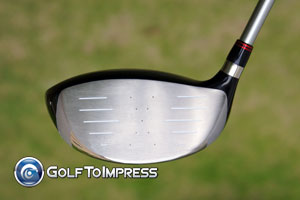 The new GR has an ultra thin 0.55mm ribbed crown that helps repel the ball with the full energy from a swing. The crown is flatter compared to last years model which had a rounder crown. This is to aid in the energy trransfer.  The weighting and CG placement result in a sweet area 17% larger than last years GR model. The face is shallower than than all other current X-Drive models and wider heel to toe. The GR face is now also a full hybrid cup face unlike last years model.  The GR is meant to provide a higher launch with low spin but for me it was a more penetrating launch which I like. It supposed to start lower and rise then carry further than last years model. I find I have more direction and control with the  launch not being so high plus the run I need. Feel is typical Tourstage which is solid but soft especially with the dual arrow thicker sweetspot chemically milled face. 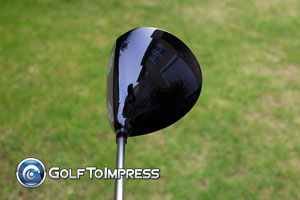 While the head is shallower and longer it does not look overly large at address. The face does appear a touch closed.  It does provide confidence at address. The GR is paired with a Tour AD B10-03W which varies in weight and torque depending on flex. The R and SR flex are rather light, coming in at 290 and 296g respectively, this makes the driver very playable by the slower swinger and more average golfer. The S flex club jumps up to 308g and lower 4..3* of torque in the shaft (vs 5.3 and 4.8*). The shaft is a pretty good match for the GR and surprisingly not bad for stock shaft when it comes to faster swingers, this is due to the stiffer butt section on the stock shaft. For example the stock stiff shaft has a stiffer butt than the upgrade option Fubuki though the Fubuki has a stiffer tip section and center section for even less spin and launch.

Overall I liked the GR driver. Good technology and design put into the head. A nice trajectory and good feel. But most importantly pretty easy to hit… for an X-Drive. Any improving player will do well with the new GR and reap benefits of good distance and control. Best of all the price is a lot lower than its more advanced and lower handicapper sibling models the X-Drive 705 Series. You can check out the new GR driver in the TSG Pro Shop!