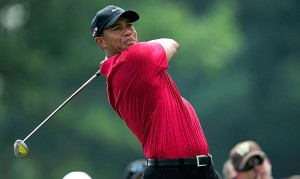 One Hole To Turn It Around

The 16th hole proved to be deadly to Padraig and Heavenly to Woods.  While Harrington was only able to irk out a triple bogey on the hole, Tiger’s 8-iron approach shot to the water-protected green rolled within inches, an easy tap-in to turn things around.  Going into the 16th hole Tiger was 1 stroke off the lead, by the end of 18 he had somehow turned it all around and won the tournament with relative ease, elevating his lead to a full 4 strokes over both Padraig Harrington and Robert Allenby.

So what does this mean for Tiger?  Well for starters, it means an additional 550 FedEx Cup points, which puts him solidly in the lead with a 946 point buffer; in addition to that, it also means that Tiger Woods is the first person in PGA History to win 7 times on the same course.  On top of ALL of this, he also notched his 70th PGA Tour Victory.  He is now only 3 victories behind Jack Nicklaus who is in 2nd place, and 12 behind Sam Snead, the all time leader.  In a word…Wow.

Here’s what Tiger had to say about his battle with Harrington, and the final round:

“We locked horns pretty good…I made a couple of mistakes. Paddy was being consistent, grinding it out, doing all the right things. Unfortunately, 16 happened. But it was a great battle all day.”

A great battle indeed.  Thanks Tiger and Thanks Paddy for reminding us just how GREAT golf can be.  Sunday, Golf, it doesn’t get much better.