When PRGR first announced their new egg Seven or as they write it sometimes egg7Seven driver, it turned quite a few heads. The concept of the egg Seven driver is built around a single loft option, yes you guessed it, 7 degrees of loft, and the promise of both great carry and run. PRGR or Pro Gear as we know them came out with a marketing campaign as folliows:

“Distance Only. Challengers Only.

egg Seven is a driver tha tmakes it abundantly clear who is able to
make the ball fly with it and who isn’t.

Test results show that golfers who can deliver higher head speeds and higher shots
tend to see improvements with their distance.

Its loft of 7 degrees is completely unbelievable for drivers.

Having said that, egg Seven embodies the dream and potential for unheard-of-carry”

Alright thats a pretty corny writeup by PRGR’s marketing group but it all sounds good. (^_^) We get the drift, the egg Seven is made for those who can swing fast enough to generate a good and healthy launch with a lower lofted driver. This is probably nothing new as many strong players opt for lower lofted drivers so what is different about the egg Seven? 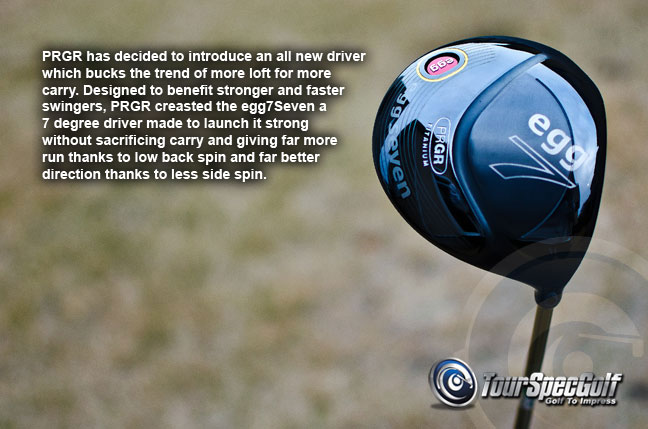 Firstly the egg Seven does not have a compact and more traditional shape that you would expect in many low lofted better player models. The multi piece head which features a Ti-6Al-4V face and Ti-3AI-1Zr-1V-1Mo crown and sole (darn that is a lot of letters and numbers) is shallow back and a nice and c0mfortably large 460cc.  PRGR has decided while this is a low lofted driver it doesn’t have to be a difficult driver. A MOI rating of 4,760g/cm2 is on the higher side meaning there is some forgiveness. Okay but lets be honest here, the first thing we mortal and average golfers will think is whoa, 7* that sounds very hard to hit but it does also sound very interesting. I showed a few of my neighbors who are of course all golfers and their eyes lit up and they immediately proclaimed “interesting… hmmmm”. Instead of standing around in front of my house and discussing how difficult it might be to hit we decided the only way was to get out to the driving range and hit it. So thats what we did. 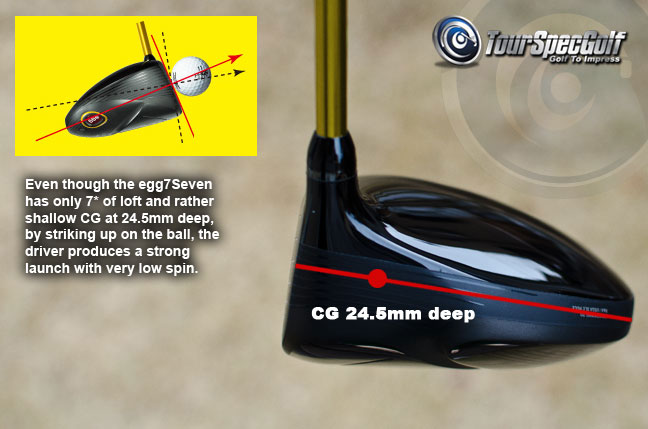 But before heading out to the range I had already taken a look at PRGR’s concept page so I knew this driver was meant to be tee’ed up and and the ball struck on the upswing. I had looked at the specs and noticed that the CG of the driver is not very deep at all in fact its quite shallow at only 24.5mm from the face.  This is interesting as typically larger MOI correlates with a deeper CG Point equaling more forgiveness or more gear effect on off center hits. Pro Gear notes that this 24.5mm placement is designed to increase tip activity due to the centrifugal force caused by the head. This in turn increases the launch angle. 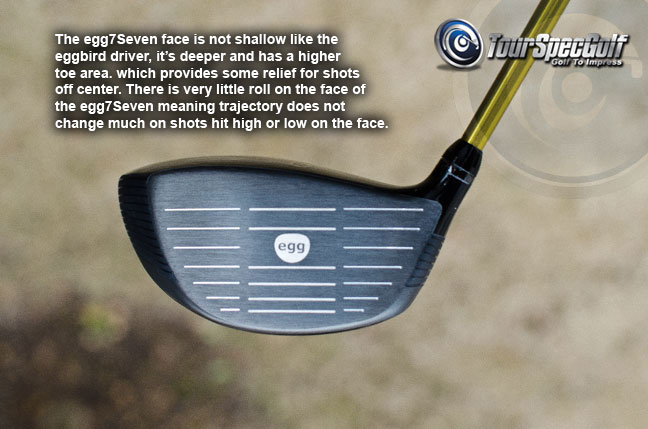 Another thing very noticeable on the egg Seven is that bulge and roll seem very minimal especially roll which can play a factor in trajectory on balls hit high or low on the face. The egg Seven also has an interesting face shape, deeper than the shallow faced average golfer model eggbird and with a higher toe which gives it a sharper look and plays more into typical misses by better golfers which is high and low rather than the side to side misses from average golfers. 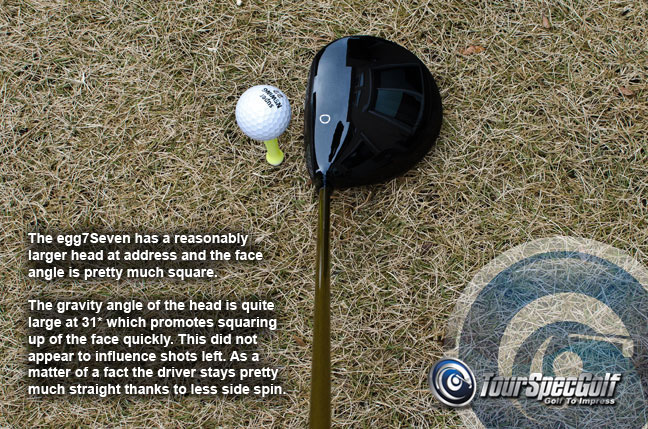 While the egg Seven is aimed at the faster swinger and better player, it doesn’t have the typical compact head shape that most athlete golfers prefer. In fact at address its clearly a bigger shallow back 460cc head. The good news is it doesn’t look overly large and the face is pretty much square. At address the loft or lack of it can look pretty intimidating and you can see there is less bulge. Another key factor of this head is the rather large gravity angle of 31*.  This paired with the short gravity distance of 38mm and the 7* of loft is made to increase impact efficiency by squaring up the head to the ball more cleanly resulting in minimal energy loss. In other words, the egg Seven is designed to catch the ball flush, without any of those glancing blows we all dread.

PRGR also provided the above table of the egg Seven going head to head with another unamed 10* driver. The 10* driver is also a better player model with relatively short CG depth hence the pretty low launch for a 10*. They were tested by the same player and shafted with the same shaft built to the same specs.  As you can see from the chart the egg seven launched lower, spun much lower carried further and ran more. All this talk about CG points, bulge and roll may mean nothing to the recreational golfer as the bottom line is how does the club perform in real life? To find out, I went withmy neighbor to our local driving range to test out the egg seven against our usual gamers. I brought along with me the Crazy CRZ460 10* with Royal Decoration SR,while my neighbors brought a Tourstage 703 Limited 9.5* with DI-6 Stiff. The egg Seven tester is of course 7* with stock egg shaft specifically designed for the egg seven in M-43 flex. For those of you who don’t know PRGR flexes, M-43 is rated for 43m/s or around 96mph which PRGR says is the minimum swing speed to see this clubs optimal performance. The stock shaft is specially designed to have a rather active tip which promotes launch angle with the 7* head. For faster than 100mph swingers, PRGR also offers the Fubuki K series 60 and 70 shafts. 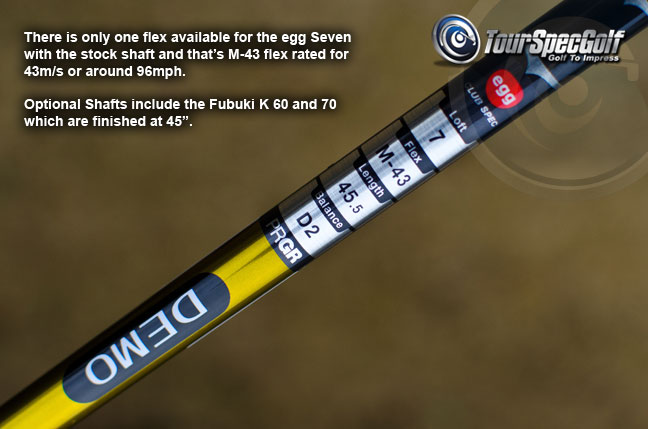 We warmed up with our own drivers at the range which extends about 275 or so yards. There is a marker dead center around 220y where mortals like us usually target our drives. I usually hit my drives quite high and the CRZ460 is a high launcher. I swing around 88-90mph and a bit on the aggressive side. I was very excited about the prospects of lowering my ball flight though I did not have my hopes up as I don’t have the swing speed to match the drivers intended audience.  It’s cold now in Japan at around 5-9C during the day which has sapped distance so with my Crazy driver I was carrying around 210 and rolling out to just past the marker around 225. When first setting up with the egg seven the face was so flat and the loft NOT very visible I felt concerned. I was ready to hit a low runner on the first swing.  Luckily thanks to warming up properly I was able to launch the egg Seven though trajectory appeared to be half the height of my 10* Crazy.  To my surprise it still carried out close to 200y and rolled further than my drive with the Crazy. The shaft was a bit stiff for me and the impact was a tad on the harder side, all indications that the club probably isn’t the best for a 90mph and lower swinger. I continued to swing away and the ball stayed very straight and low and just kept carrying out to 200y and running sometimes past 230!!

My playing partner had even better success. He swings right around 96mph, maybe a tad more with a bit of an aggressive transition so was a good candidate to test the egg Seven with stock shaft.  With his Tourstage 703 Limited 9.5*, he was carrying it to about 220 and rolling it to around 240y with a nice boring flight. He grabbed the egg Seven and on his first drive hit a penetrating mid trajectory ball that carried beyond the 220 marker and rolled past the 250y mark.  He just turned at me and smiled. He continued to do this having a few roll up to just under 260y. The 7* driver was launching lower than his 9.5* but carrying further and running more.  At this point he began asking me how much the driver costs and how great it would be on a windy day. He was sold. 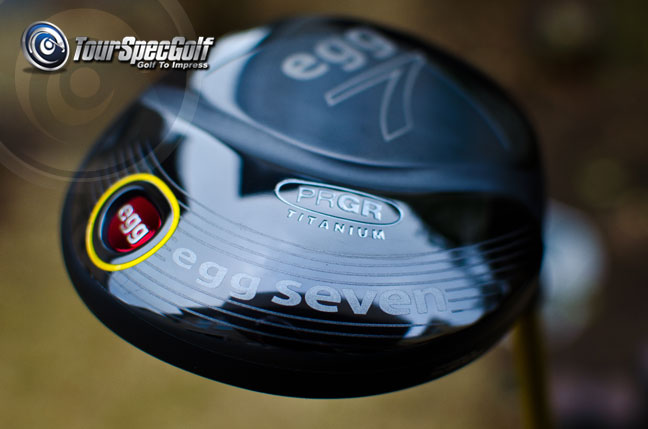 So a few things we learned from testing. The egg seven is not as difficult to launch as expected. Yes trajectory is low, it is 7* afterall, but it carries the equivalent of a 9-10* driver but runs much more.  It’s rather straight as neither of us found it going left or right and the lack of bulge is probably playing a factor there in reducing side spin. The large gravity angle seemed to make squaring up quite easy which produced very good impact. It certainly does seem to benefit the faster swinger. I didn’t see a huge gain over the CRZ460 10*, it was more or less equal for me with a tad less carry and a bit more run but I swing below the speed this club is intended for. My playing parter saw better carry and better run than his Tourstage even with the obviously lower ball flight. Based on his results, I am very interested to see how a player with say 105-110mph would fare with this driver and the Fubuki K. For faster swinging players wanting a low launch without sacrificing much carry and wanting to gain lower spin and more run, the egg seven appears to be a very good option. If anything it is a very interesting option with a lot of potential.  I began to think of what it would be like to experiment with a softer and lighter Crazy Royal Decoration in this head…. for a player like me, the 7* goes completely against conventional wisdom but whoever said we crazy golf enthusiasts are conventional. (^_^)

The egg Seven launches in March and we’ll have the pre order up soon in the pro shop.