I had the chance to play the new PRGR eggbird at Nouvelle GC on Tuesday and it was also a good opportunity to compare it head to head with the Ryoma D-1 Premia out on the course. Both drivers are very similarly spec’ed at 46.5″ long and 10* for the eggbird and 10.5* for the Premia. Both have similar target audiences and strong points, made for the player wanting maximum distance and forgiveness. So how does the new PRGR eggbird compare to one of this years distance kings in the Ryoma D-1 Premia? 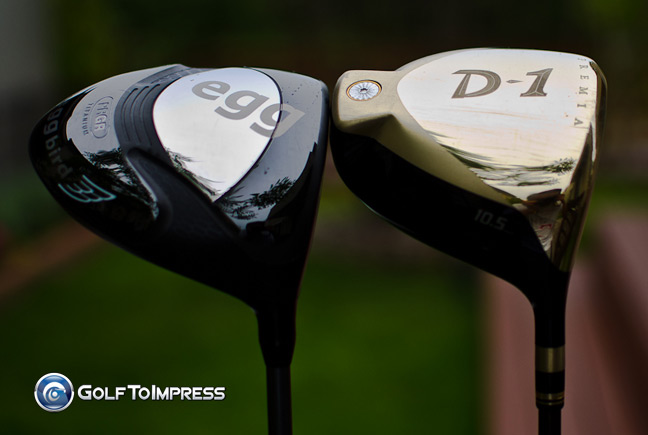 The PRGR egg bird driver is of course part of PRGR’s egg line which was created just over 3 years ago, a line targeting the average golfer with distance performance and ease of use. The egg line quickly grew in popularity dominating distance performance especially with its egg Spoon 13 15 and 17* woods. Even several top flight Japan tour pros like Shingo Katayama and Hideto Tanihara were bagging the egg Spoon. Based on the Spoon’s concept, PRGR had come out with its first generation egg Impact driver. The egg Impact was a 43.5″ driver made to increase smash factor and control. The idea was increased average distance thanks to more fairways hit.  I tested and played the egg Impact and without a doubt it was easy to hit straight but I felt the 43.5″ resulted in too much distance lost and I was not a fan of the feel of the original egg Impact. 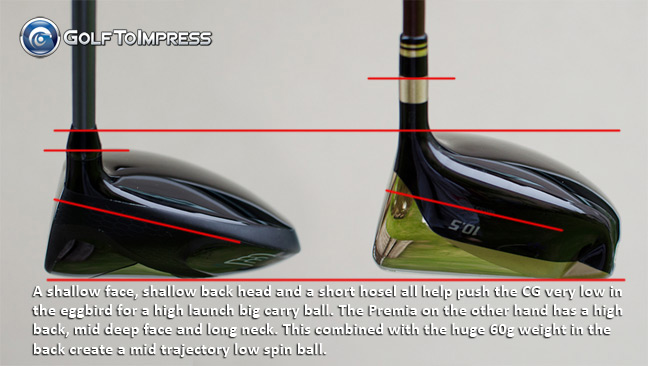 A focus on distance and forgiveness

The new PRGR eggbird driver is quite the opposite of the old egg Impact. It is a whole 3 inches longer and nearly 50g lighter! The 46.5″ length and the ultra light weight are for the sole purpose of increasing swing speed. Manufacturers have done studies with findings that apparently show for every extra inch in length and increase in swing speed of 1.6-2.0 m/s is possible. That means that by going from a 45″ driver to a 46.5″ driver, a player could theoretically increase their overall swing speed by 2.4 to 3.0 m/s or 5.5 to 6.8 mph. AND going from 43.5″ to 46.5″ possibly 11mph to 13.6mph increase in speed.  The Ryoma D-1 Premia has a similar idea when it comes to length and weight. the Premia is also 46.5″ and while lightweight at 282g, it’s still 20g heavier than the eggbird which is a featherlight 261g.  As for the head designs, the PRGR eggbird is quite modern and high tech looking with an advanced looking sole featuring carbon webbing and multiple finishes. The Premia is is subtle with its gold IP sole (if you want to call gold subtle that is). The eggbird is considerably shallower than the Premia which actually has more of a classic high back head.   The shallow head of the eggbird pushes the CG deep and back in the head while the higher back Premia doesn’t have as low a CG it’s also quite deep thanks to its huge 60g back weight.

Shallow face for the average golfer

The shallow face of the New PRGR eggbird favors miss hits towards the toe and heel, typical average golfer misses while the mid deep face of the Premia is still good for shots missed high and low on the face. The hosel lengths and bores are also quite different on both heads. The eggbird has a considerably shorter neck to create stability for its larger flatter high MOI head and aids in placing the CG lower while the Premia has a longer neck and higher insertion depth creates a more active tip area and brings the CG to a higher point. 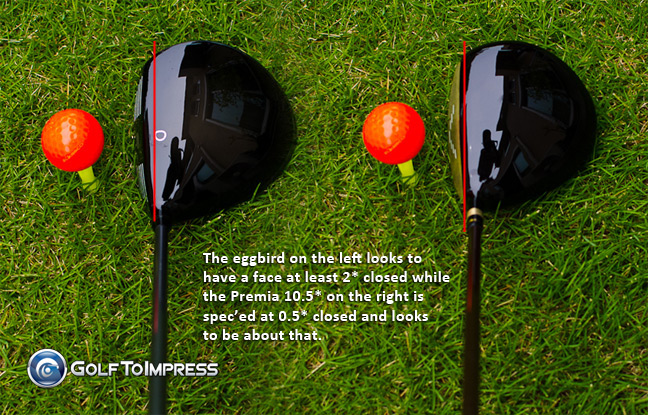 At Nouvelle GC, I decided to alternate between drivers through the round. Before even hitting the ball, there are quite big differences between the two. The eggbird really does feel featherlight in the hands and for some people it might feel too light. Even the girls I was playing with picked up the driver and were so surprised at its weight asking me if it was a ladies driver. The Premia feels light but not nearly as light thanks to a higher swing weight as well. Secondly at address the eggbird,which does have the egg alignment mark, looks quite a bit larger than the Ryoma, and this was not a bad thing as I felt very confident at address with the eggbird driver.  The Premia at address looks much more traditional. For face angles as you can see above, the eggbird is very obviously closed. PRGR has done this to counter the longer length and because in their studies, the majority of average golfers battle the slice and right side. For some people the face angle may be distracting but I didn’t even think about it when using the driver.  The eggbird needs to be tee’ed up a little bit lower thanks to the ultra shallow face.

On to feel and impact. The Ryoma’s are one of the softer feeling drivers on the market and they have very good pop to them. On the first hole I used the PRGR eggbird and at impact it got everyone’s attention. It was not super loud but on the louder side and in my opinion it actually sounds pretty good. The eggbird makes a higher pitched tink at impact and right away my playing partners proclaimed, that sounded like you hit it well.  With the Black IP face, its easy to see where you hit the ball and on the first hole I was off center towards the heel which did not surprise me as I simply am not very good at puring long length drivers off the sweet spot. The good news is even missing the center, feel was very good and quite springy and the ball still weight high and straight with pretty good distance carrying about 220y. It’s not Epon or Ryoma type feel but still feels pretty good. 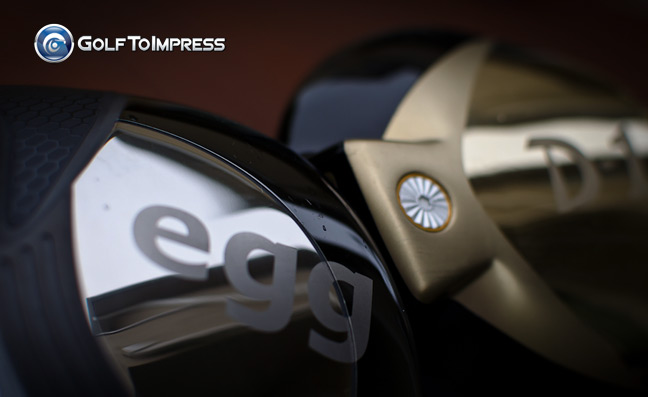 Trajectory wise, the egg launches on the higher side. Even at 10* it launched higher than the 10.5* Premia which had a mid trajectory with a bit more run.  It’s deep low CG is designed to do this and create a max carry ball. After playing a few holes with both 46.5″ drivers, I began to get more consistent striking around the sweet spot. The eggbird hit in the center area goes very straight rather high and carries a lot. Due to its 46.5″ length, I did not miss once on the toe, all my misses were towards the heel and I was not punished for any of them, with every shot still landing in the fairway. It’s pretty close if not equal in forgiveness horizontally across the face as the Ryoma which I consider the most forgiving driver today. My worst shot was probably a bit of a push doe to not squaring the face at impact (darn I wish this was a 45.5″ driver!).  I did not pull or hook any shots as I find a long driver harder to hook or pull.

Throughout the round at no time did I ever feel like I wanted to dedicate myself to only one of the drivers meaning I was equally enjoying hitting both the eggbird and Premia.  After the round I sat down and thought long and hard on what I thought about the eggbird. I know what a Ryoma driver can do at both 46.5″ and 45.25″ as I own both and hit the 45.25″ length better as I’m more consistent with the shorter length. I really liked hitting the eggbird at 46.5″ but couldn’t help think what if the driver was a bit shorter at say 45.5″ or even 46″?  This of course is a personal preference thing. Many golfers out there have no problems hitting a longer length driver and in turn will reap the rewards of extra carry and distance.  Even though I wish it were a shorter length, the thing is, it is designed the way it is. It’s meant to be ultralight weight and 46.5″.

The bottom line is I like the New eggbird driver. It is very forgiving, has very good distance and feel. Looks pretty darn good and is nearly HALF the cost of the Premia.  This driver has a lot of potential and average golfers and slower swingers should not hesitate to consider it especially if they have no issues hitting a 46.5″ driver.  I really don’t want to return this demo and I want to play it again. (^_^)

The PRGR eggbird is available only in 10 and 11* lofts with M-35 (a strong ladies flex) M-37 (R2 – soft R) M-40 (Regular) and M-43 (Stiff/Regular) flexes. At this point I don’t know if custom shafts are available but I’ll talk to our PRGR rep about it.  It gets released on Augusts 6th so look soon for the pre-order in the pro shop!