in Cameras, Image of the Day, Japan, Out of Bounds
903
VIEWS
Share on FacebookShare on TwitterShare via Whatsapp

Last week I traded in my Nikon D5100 DSLR for the new Olympus OM-D E-M5 over at Map Camera in Shinjuku.  I loved the D5100 but it was time for something new and the very cool OM-D caught my eye a few months ago before launch. I have shot my wife’s Panasonic Lumix GF1 so I have had experience with the Micro Four Thirds format however its 2x crop factor and high ISO performance (lack of) kept me from using it as my main rig. Over the last couple of years I have owned the GF1, EP-L1 (though neither as my main camera), as well as a Sony a-33, and Fuji X100 besides my D5100. After checking out the tons of feedback and reviews online, I was satisfied that the image quality and high ISO could satisfy my needs and I thought it’d be nice to share lenses with the wife if we were both on M43. 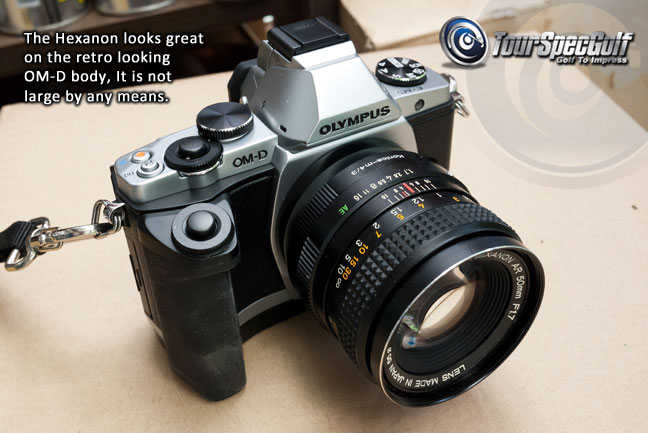 I spent the last week familiarizing myself with the camera and after several days of shooting I can say as many do on the web, I do not like the placement of the strap lugs on the camera plus the menu takes a while to learn. Those minors aside, the camera looks awesome, handles great, especially with the grip and takes wonderful pictures. I can see how some say the buttons are a bit on the small side but it doesn’t affect me much as I have small hands. I personally feel, the E-M5 is as feature rich as any camera out there.  My problem was with the stock 12-50mm lens. Its a nice lens, weather sealed like the E-M5 body, has an electronic zoom as well as macro but I found it was not that sharp and with it’s aperture of 3.5 to 6.3, not that fast and we all know we love fast glass.

The truth is I am was just using those excuses to get out there and buy some legacy prime lenses which are tons of fun. Cameras like the Sony Nex and Micro Four Thirds have access to many adapter types so enthusiasts can mount pretty much any lens and shoot with manual focus. There are tons of prime lenses out there with very fast apertures and at very good prices. I had seen on several other sites, Leica and M43 users shooting Konica Hexanon lenses so I did some research and found that the Hexanon 50mm f1.7 was a very good performer at a very reasonable price. So I thought I would try this lens first so I went and ordered a Kipon AR to M43 adapter and won a Hexanon 50mm f1.7 on Yahoo Auctions for a mere 1200 yen… yes that is about $15.00 USD. This Hexanon is the all black version with the rubber inlay focusing ring which began production back in 1973. Its a very solidly built lens with a very smooth focus ring and as you can see in the image above looks great on the camera.

So the lens arrived this afternoon and I thought I would take some test shots with it.  Without beating around the bush, the truth is I wanted bokeh and while I could have got an f1.2 or f1.4, $15.00 for this lens was something I could not pass up. So I proceeded to test this lens shooting wide open at f1.7 pretty much 95% of the time. I set the magnification of the E-M5 at 5x and I actually use Fn1 to magnify as I find it easy to press with my thumb. I also enabled the image stabilization for manual focus in the viewfinder and during magnification. 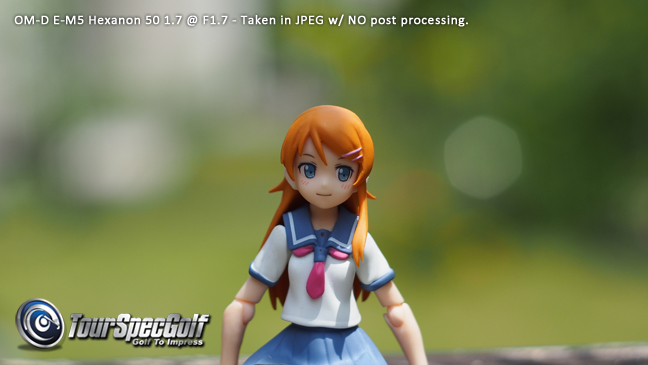 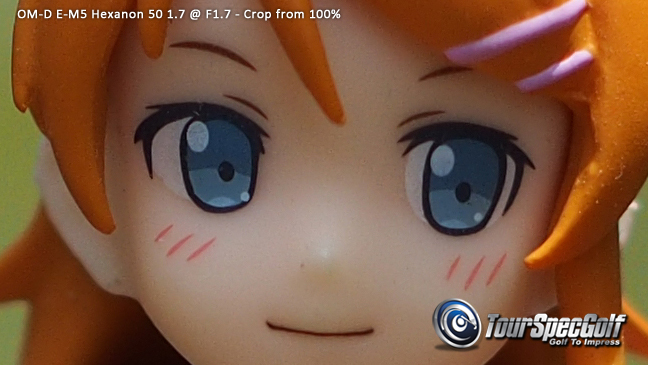 I had Kirino volunteer as my model today and I used her most of the time in the back yard for shots. One thing about a 50mm on M43 is the crop factor in fact makes it 100mm which is rather on the long side. That plus its minimal focus distance of 55cm made it hard for me to get in close to Kirino since she is just so small. So the magnification worked great and I was VERY surprised at the center sharpness at f1.7. I was not expecting this lens to be that sharp wide open! 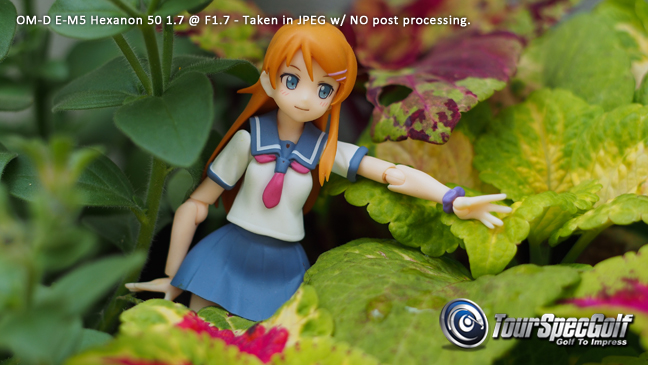 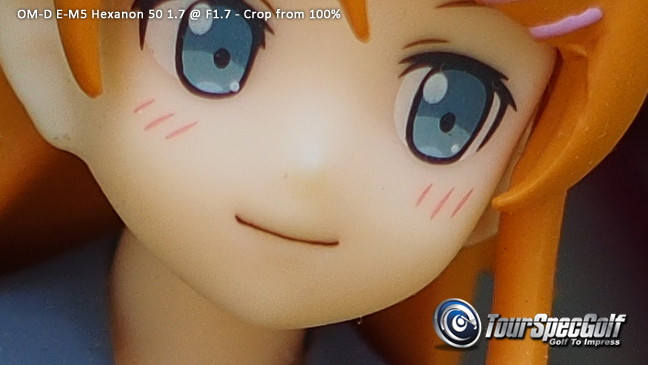 Typically fast glass can be pretty soft and dreamy wide open (which is not necessarily a bad thing) but this 50mm f1.7 is sharp! I should also note, I turned the noise reduction setting for the camera from normal to low and turned down the sharpening -1 in the settings. 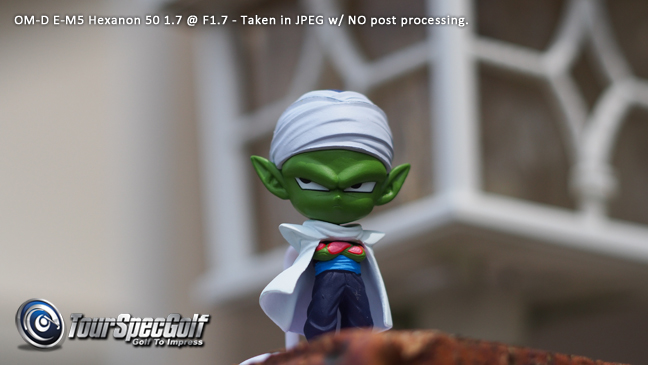 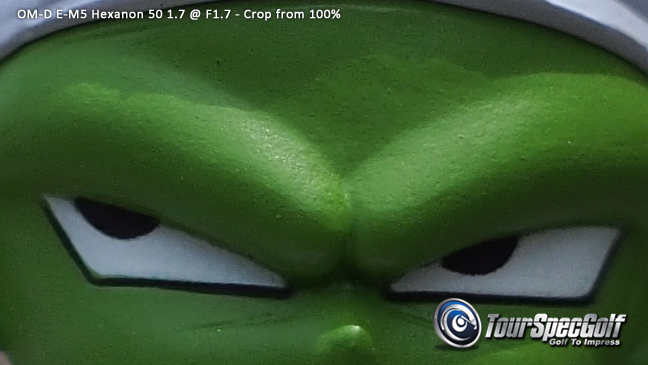 The E-M5 also has a warm color setting which some users don’t like as it adds an orange and warmer tint to the images. I did turn it off for all these pictures. Piccolo decided to join me for a shot outdoors as well.  The bokeh is rather good and the center again sharp though the quality of the paint on Piccolo’s face is obviously not that good and it shows in the crop (but thats not the cameras fault as its just capturing the actual texture of his face). 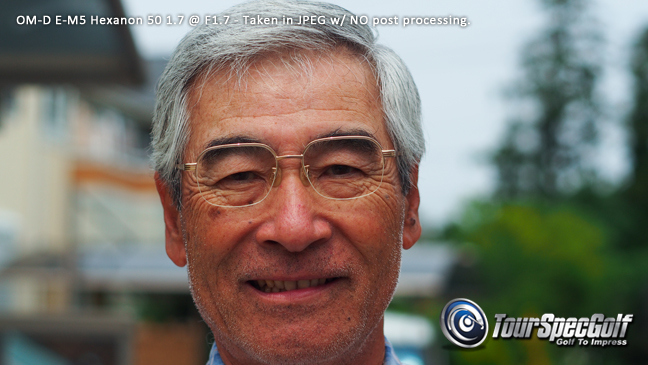 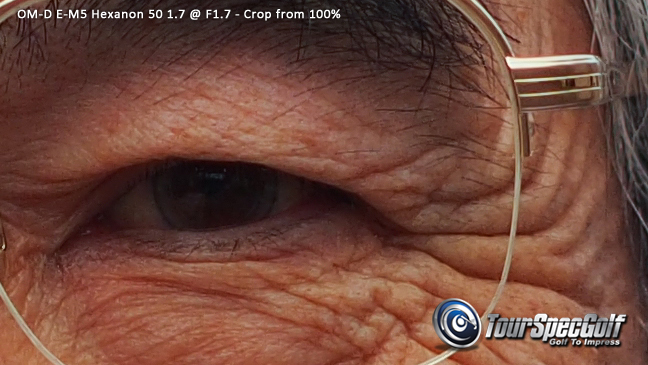 So my neighbor Hayashi-san stepped out while I was shooting and I asked if I could grab a quick snap. Please don’t mind the composition, I was shooting in 16:9 and I ended up taking off the top of his head and the bottom of his chin. I should also note that I took all of these in JPEG and did no post processing on them other than importing them into Lightroom then re-exporting them for this blog. At this point I was quite excited with the lens so when we headed over to my wife’s parent’s house I brought the camera with me. 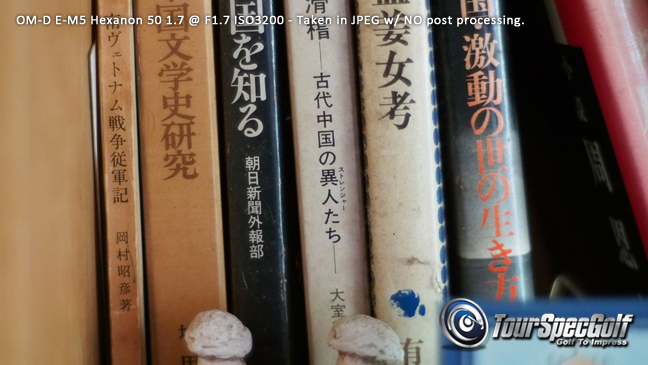 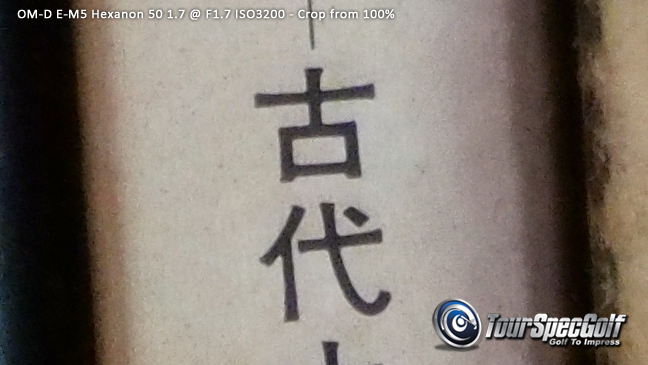 One of the rooms was dimly lit with just some light creeping in from outside through a side curtain so I thought I would test the high ISO and shot the above image at f1.7 and ISO3200. I have to say I love this lens, how can I not considering its price and its performance. It is not hard at all to manually focus on the E-M5 which makes it a great choice for those photo enthusiasts who own a stash of legacy lenses.  Now the only problem is I want to go out and get more lenses. That said, I’ve been very happy with the OM-D E-M5, it focuses quickly in autofocus, the image stabilization is superb not only in photos but in video too. Pictures are turning out great and I believe it can only get better.  Its a fun camera to use and you are limited only by your own imagination! I will get out and around in Tokyo for more testing in coming weeks but for now more backyard pictures! 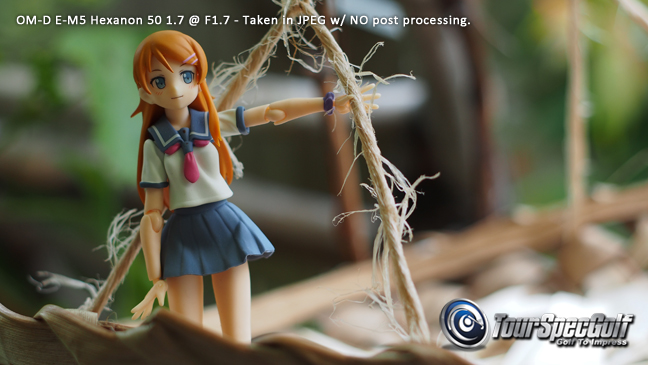 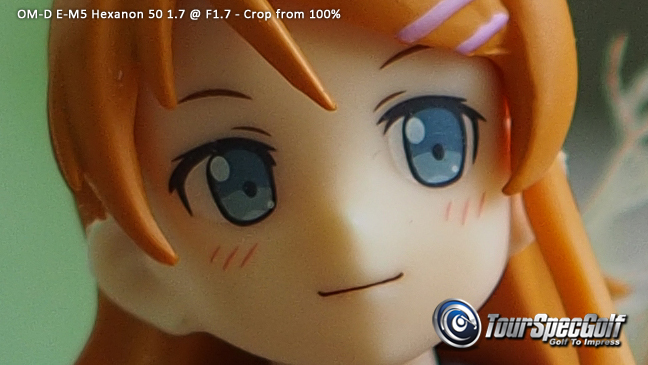 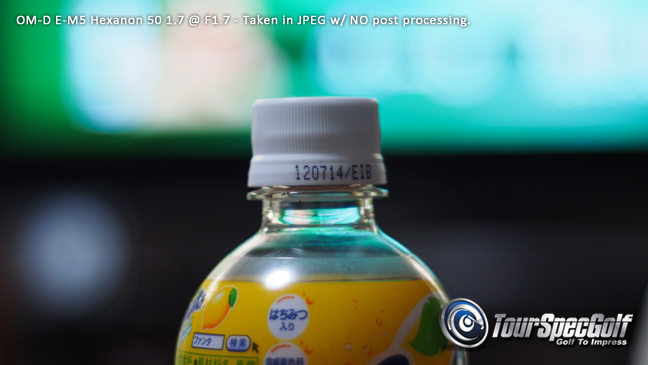 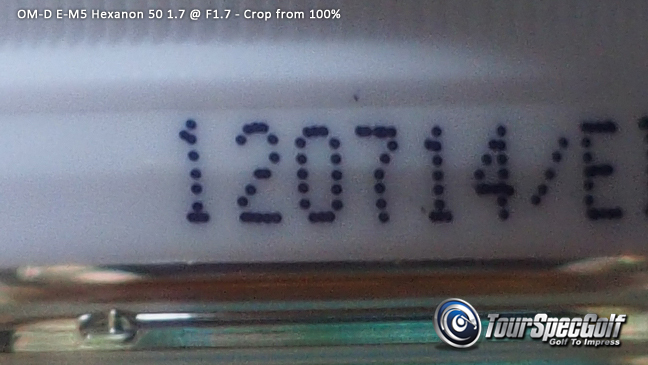 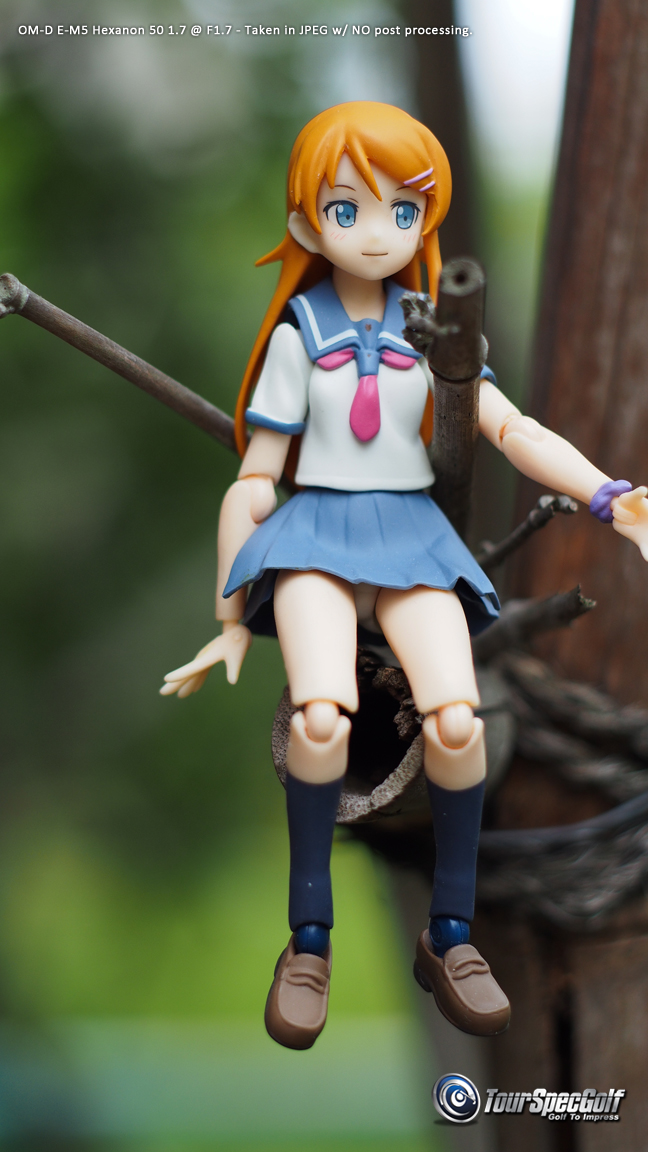