in Cameras, GTI Exclusive, New Equipment, Out of Bounds, What's in the bag?
81
VIEWS
Share on FacebookShare on TwitterShare via Whatsapp 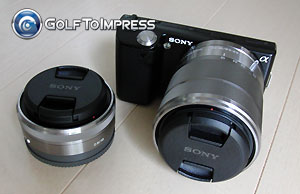 My new Sony Nex-5 camera arrived yesterday and like a kid on Christmas day I could not wait to try it out.  The Nex-5 is said to be the world’s smallest and lightest interchangeable lens digital camera.   The Nex-5, constructed from magnesium alloy,  offers a newly developed 14.2 megapixel Exmor™ APS HD CMOS sensor. About 60 percent larger than the sensor in micro four-thirds cameras, this sensor is key to the exceptional image quality, extremely low image noise and creative defocus background effects that are familiar to DSLR users.

Besides great pictures, the Nex-5 has breakthrough video performance, as the word’s first interchangeable lens camera with an APS-C sensor to continuously adjust focus and exposure while recording video. The NEX-5 camera offers Full HD movie capture (1080i AVCHD and 720p MP4) with Full HD 60i recording. Still and video image quality is further refined by Sony’s powerful BIONZ® processor that ensures quick DSLR-style shooting response with fast, precise auto focus and minimal shutter lag. Both cameras can also capture fast-moving action with a high-speed burst of full-resolution images at up to 7fps.

The model I got is the Sony Nex-5D (J/E) model which is a double lens kit with both the low-profile E 16mm F2.8 wide angle prime “pancake” lens and the 18mm-55mm F3.5-5.6 standard zoom lens with image stabilization. The (J/E) stands for Japan model with English menu (and other languages) as typically Sony Japan models feature a Japanese only menu. I had considered getting the Japanese menu model at first but figured I’d be able to best use the camera in my first language so I got the J/E from the Sony Japan International models division.

Another cool feature is the sweep panorama feature where the camera can take a picture while rotating horizontally at 226* as you can see in the picture above I took at my local driving range. Also took some test pictures yesterday at the in laws’ house and around our garden in the back after wards… should be great for my golf club pictures and video reviews!

For those who are curious on finding out more on the Nex series of camera’s check out the Nex-5 and Nex-3 17 page review over at dpreview.com . In the meantime here are some sample photos I took yesterday!