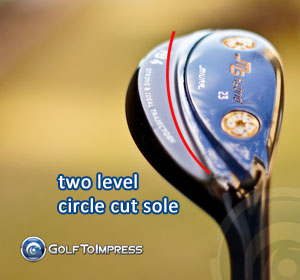 Miura Giken Japan has introduced their first metal wood since the MD Precious Editions several years ago. This new model, the MG Hybrid is an all around versatile utility to replace 3 and 4 irons. It’s a beautiful looking black IP finished head with some gold accents and two weights in the sole to increase MOI.

The MG Hybrid is designed to have the accuracy of an iron but the ease of use of a wood. The MG Hybrid produces a more penetrating trajectory thanks to a deeper face (purposely designed the same height as a ball) and optimal CG placement. Miura decided that to create the optimal trajectory for different lies and conditions, the CG should not be placed too low like in many clubs today. This allows for more stability, direction and control. 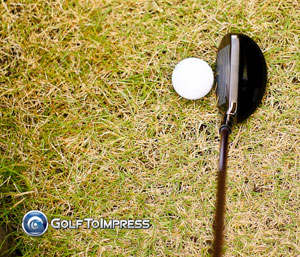 The MG Hybrid features a stepped sole or what they call a circle cut sole. Because the sole is stepped, less friction with the ground is produced by only allowing the front portion of the sole to make contact. They’ve also designed the club so that at address, the MG Hybrid gives the illusion of a low offset iron. They’ve done this by utilizing a receding crown giving the appearance of a top line like an iron.

I received the 23* head today and first impressions are that it looks very easy to hit. I stuck a shaft in it (just in the hosel, not actually installed) to take some pictures and it does set up rather nicely and the finish is pretty good. I personally don’t like the gold so much but that is subjective and I’m sure that there are those who will like it or won’t care since its on the bottom sole. The face profile is interesting and almost rounded and as I mentioned the same height as a ball unlike many utilities and fairway woods today which are getting shallower and shallower.

Head only or custom built…

This SUS455 club is available as heads only and we can have the club built to your specs with any shaft. It features a 0.350″ diameter hosel and is available in 20 and 23* lofts. I only have the head for some picture taking and visual impressions as this head is going to Tourspecgolfer for testing.

For a limited time only, we’ve got an introductory price of 189.00 for a head going in the TSG pro shop now. Here are more pictures I took today: