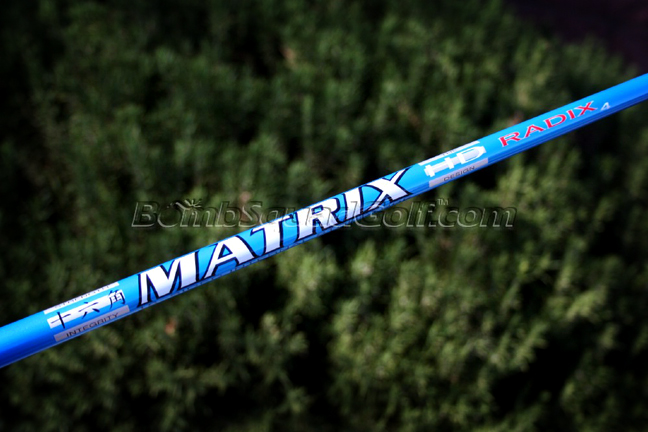 Matrix Shafts is about to release several new offerings that were highlighted at the 2010 PGA Golf show in Orlando Florida.

Matrix Ozik Radix
Radix- Latin for “root” or “base” is built over the HD mandrel so it will have a technology story under the $150 price point. Will have weight classes from high 40g to high 70g. Also available in a Tour model that will be under $250. Will be available March 1st.

Matrix Ozik Phi
Phi – Greek term for mathematical equation to Golden Section or Golden Ratio. Tour level irons for the better player. Will from a spec perspective give a better player better numbers than a steel shaft. Will be available in March.

Matrix Ozik Reign
Reign – Will be a Dealer Only line. First off will have M2 design over an HD Mandrel. It will also have heat sensitive paint, which was a big hit at PGA Show, as it turned from a light blue to white at 86*F. Also in the line will be a little softer TPHD also built under Golden Ratio from above. The TPHD in this line will have a Photo sensitive paint to help it change colors in the sunlight.

The Matrix team has been on various forum boards like GolfWRX and BSG asking members what they want in a shaft looking for idea’s and acting on requests. I think that’s a great way to shape and form products of the future. Only problem is they have not asked TSG members what they desire, wondering why? Maybe because we are a smaller group of elite clientele or they simply may not want to hear the request for 50-80t carbon used in their shafts, many shaft brands that use lower rated carbons stay away from It due to cost.  How can one charge 800-1000 for a shaft made of anything but the best when in Japan brands like Crazy Shafts and Quadra have been using 80t, and Fujikura using 70t for over a year now?

Bottom line is everyone knows this is the top of line grade carbon, some will discredit it until it’s part of their own line. The only way it gets better than 80T is a proprietary version of 80t that is specific to golf instead of the Aerospace industry.

Many shaft brands stray away from mentioning what grade of carbon is used in their higher end shafts or discredit it. Still don’t you want to know?