When many of us talk about wedges, we talk about the clean design and the simple look as well as its shape and grind. The truth is there are many great looking wedges out there but in the end do aesthetics contribute to performance? Enter S-Yard’s new BOLD wedge. It is by no means the cleanest looking design or simplest looking wedge, but without a doubt one look at the BOLD entices visions of strength, technology and design. In other words, the BOLD looks all business. 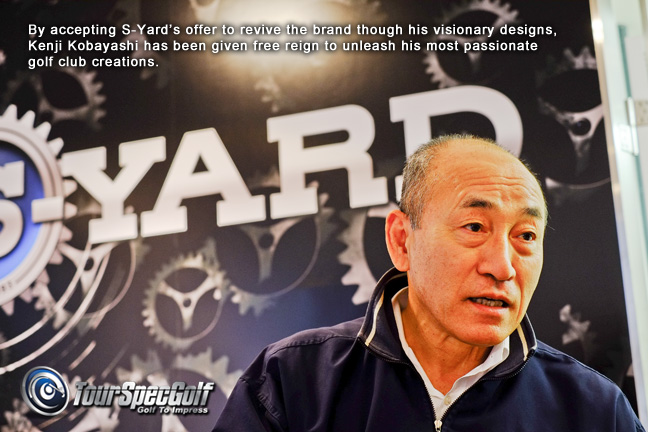 The entire TSG crew is in Japan for the Japan Golf Fair that was held at Tokyo Big Sight last weekend. We were lucky enough to have some time to visit S-Yard on Tuesday and to sit down with Kenji Kobayashi the president and chief designer of S-Yard Golf.  If you read my post about the Rebirth of S-Yard and its T.388 driver last month, you will know that Mr. Kobayashi has over 40 years of experience in the golf industry including the last 20 as the highly respected President and top designer of the world’s largest forging house, Endo Manufacturing and its private brand Epon Golf. It is always a pleasure to sit down with one of the most technical minds in golf and he was happy to talk to us about his new creation the BOLD wedge. 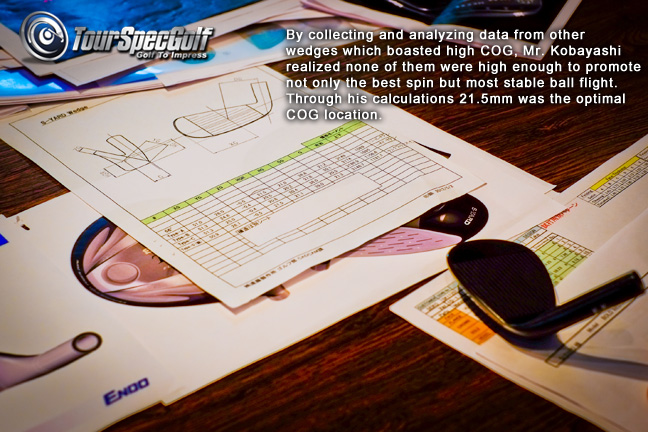 The BOLD wedge may very well be Mr. Kobayashi’s favorite design to date and this includes a resume of clubs over the past 18 months alone which he designed like the Epon Zero driver, Z:EN Putter, Personals muscle backs and of course the T.388 Forged driver for S-Yard. Yes this wedge is his ultimate in technical expertise, even over all the models from Yamaha, Titleist, Tourstage, Callaway, etc all of which he played some part in designing over the past two decades.  Its no secret S-Yard clubs are produced at Endo and S-Yard and Mr. Kobayashi would not have it any other way thanks to his ties to the forging house as well as its ability to produce the most advanced golf clubs with the highest workmanship. It is through his experience at Endo that he was able to gather and analyze the data of many other wedges on the market and come to certain conclusions for the BOLD. In recent years, many brands have realized that a higher COG (center of gravity) in a wedge can result in more spin and a more stable trajectory.  Because of this many brands now tout these higher COG designs. Mr. Kobayashi found that while COG has moved higher in many newer wedges, it was still not high enough to create the best spin and optimal stability. 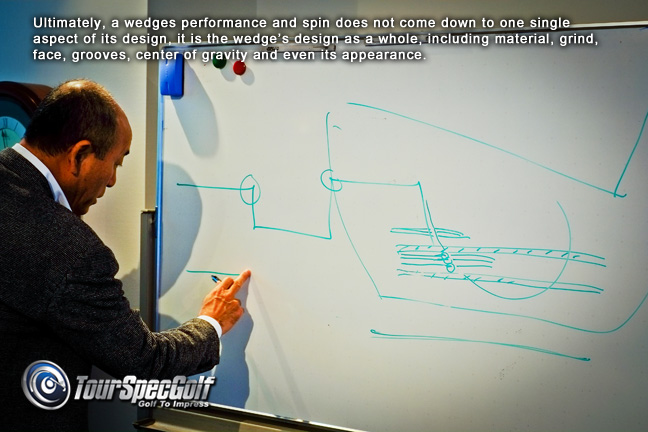 Mr. Kobayashi explains that most of the mass in a wedge is in the sole hence the low COG on most wedges. This is of course something we already know. Mr. Kobayashi also notes that with the lower COG and the tendency for players to strike the ball lower on the face to hit the sweet spot of the wedge (essentially where the COG is), that lower impact actually can ever so slightly cause loft instability at impact. This plus the extra high launch causes less spin and traction and an unstable ball flight.  Comparing numbers and doing various tests, he decided that 21.5mm is the optimal COG location for best spin and most stable trajectory thanks to its ability to “grab” the ball.  He also noted though, spin from a wedge is of course not relative to a single design aspect only. The wedge design as a whole must work together for max performance and this includes the material (and even finish), COG position, score lines/face, grind and even how it sets up as we all know golf is mental and confidence is everything. 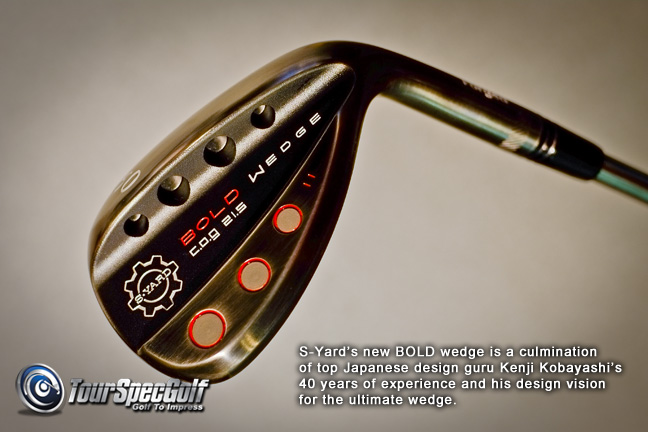 With Mr. Kobayshi’s initial focus on the COG location of 21.5mm, he set out to design a wedge that would embody this number. He realized that no matter how thick the top blade and thin the sole, 21.5mm could not be obtained without a more radical manufacturing including weighting alterations. Mr Kobayshi began by creating molds, one for the shape of every loft (he does not believe in creating one wedge mold and then tweaking it for multiple lofts is slightly different and should be manufactured that way depending on its intended purpose).  These heads are of course forged from JIS S20C steel at Endo, grinded into shape and then drilled above the sole to remove a large amount of weight.  The subtracted weight is then put back in the head by using high quality tungsten weighing to the tune of up to 25g in the top blade of the wedge. 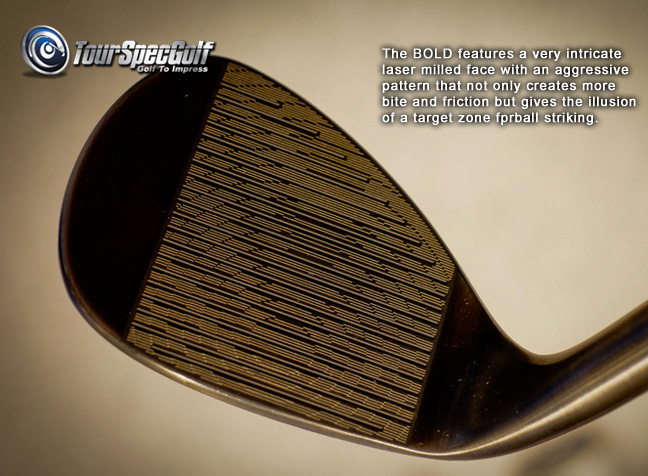 As they began testing this design the saw an increase in spin rate as well as a stronger more stable ball flight which allows players to attack the pin and rely on heavy back spin to stop the ball or draw it back to the hole. Mr. Kobayashi further enhanced the spin by decreasing the pitch of the score lines and having Endo do a very intricate laser milled pattern on the face. Looking at the image above, the milling look almost like extra teeth thanks to the circular design which can actually act as a target aid. 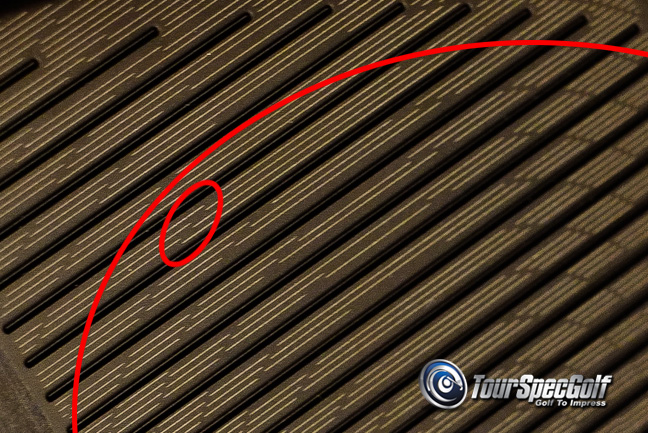 A closer look shows that the circular patter are actually breaks in the laser milling lines across the face which cause those circular illusions. I asked Mr. Kobayashi what the reason was for this besides being visual and he explained that the ends of those mill lines also contribute to more bite especially when working the ball with the full length of the face.  Those who open the face of their wedge and create more spin by moving the ball up diagonally across the face ie from bottom heel towards the top toe will experience more bite. 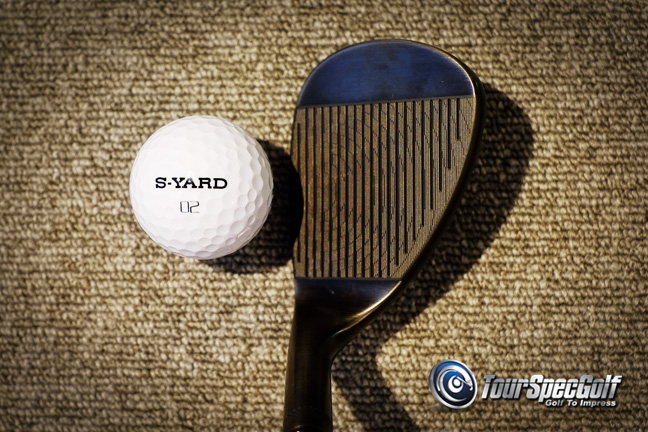 Here is a look at address and you can really see how one could line up the ball with the face milling. Its pretty cool and I think its one of the most interesting milling patters I have seen. The picture above also shows the shape and offset at address. The BOLD is of course thicker up top but its tear drop shape and darker finish do not give the impression that it is a thick wedge at address (though it clearly is when you look at the back face). The offset is progressive meaning that the lower lofts have a touch of offset progressing into much less offset in the higher lofts. Mr. Kobayashi explains that each loft/wedge has its specific intentions and offset is taken into consideration as Mr. Kobayshi breaks up his 5 lofts into 3 groups. The 50 and 52 which have offset are made for approach shots most likely with 3/4 to full swings. The slight offset helps square the face for better impact. The 56 and 58 are sand wedges which have less offset for control the less offset comes into play as well when the ball is played more forward in your stance for example in bunkers.  Finally the 60 is the lob wedge with the least offset as it is meant for delicate control and touch shots. The less amount of offset allows you to direct the ball where you want it to go. 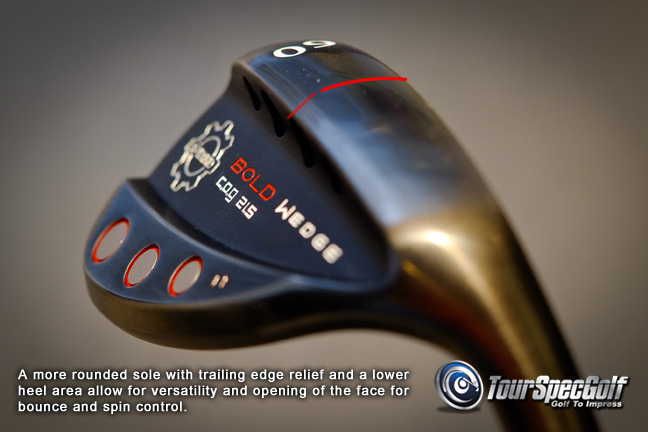 Mr. Kobayshi wanted the BOLD to handle a wide variety of conditions so he decided on an S grind which features a rounder medium sole width with moderate camber (curvature of the sole). Bounce is on the higher side but this is because it is measured at its highest point on the rounded sole of the BOLD.  Because of the camber on the BOLD the effective bounce is in fact less. The S grind has trailing edge as well as toe and heel relief which allows for opening of the face and cleaner entry and exit from the turf.  Mr. Kobayashi believes that bounce is a good thing and will add to the wedges ease of use. 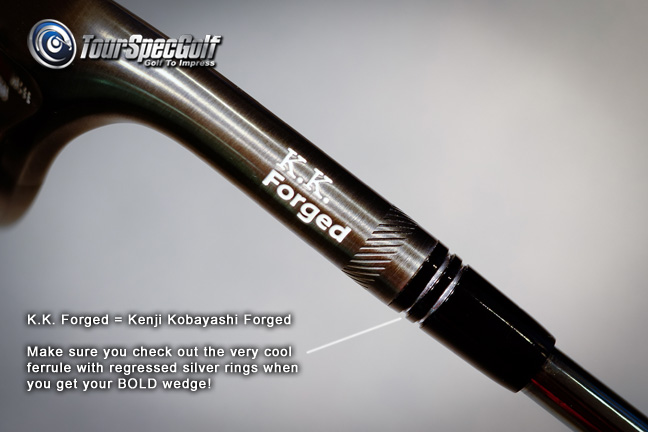 Visually the wedge has some nice touches on it. We would have loved a little less stamping but its one of those things the Japanese will always lean towards… lots of words. Other than that it looks quite aggressive which may not be everyone’s taste but the more I look at it the more I like it. It’s machined hosel and very cool socket are very nice looking. The finish of the wedge is non plated with a black satin finish. Because it is not plated, this means the wedges will require a bit of maintenance ie keeping moisture off and wiping dry. I asked Mr. Kobayashi about this and he said they considered plating but in the end through their testing decided that the raw unplated S20C steel not only gave the best feel but more friction on the ball. Plating is not out of the question for the future but for now he likes the black satin finish which matches very well with their very good stock shaft, the Shimada K’s Wedge shaft in DCR (Dark Chrome tint). 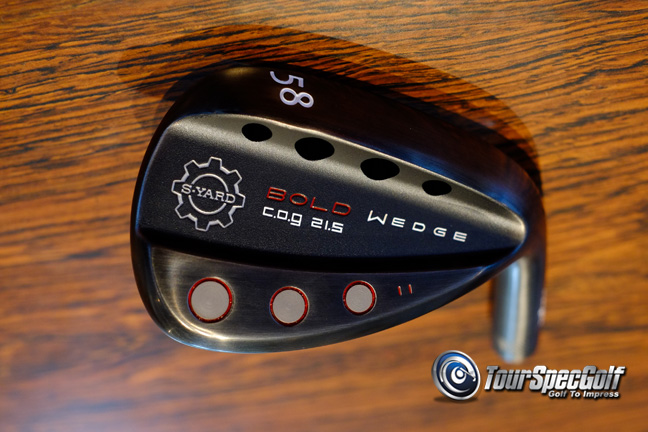 The BOLD wedge was just announced on Tuesday and we don’t even have our pricing yet (retail is around 295.00 USD) but are currently taking reservations through your forums and email. The first 500 pieces were allocated for the Japanese domestic market and practically sold out in ONE DAY. It appears we have been lucky enough to get a small number for the March 17th release (the second batch is slated for May). The BOLD is available in 50/10 52/12 56/14 58/11 60/11 configurations all with the stock Shimada DCR 121g Wedge shaft. Custom shafts are available but initially standard specs will be shipping. The wedges all feature heavier head weights and D3 in the 50 and 52 and D4 in the 56 58 and 60* lofts.

This has to be one of  the most exciting wedge releases in a long time. Its design, its concept, its manufacturing and quality all point to big demand and I can tell you know, every staff member at TSG has ordered one and are dying to play it and this has never happened before for any other wedge.  Join us in this revolution by contacting us to reserve yours!

2013 Year of the Muscle Back – Great Blade Choices!

2013 Year of the Muscle Back - Great Blade Choices!