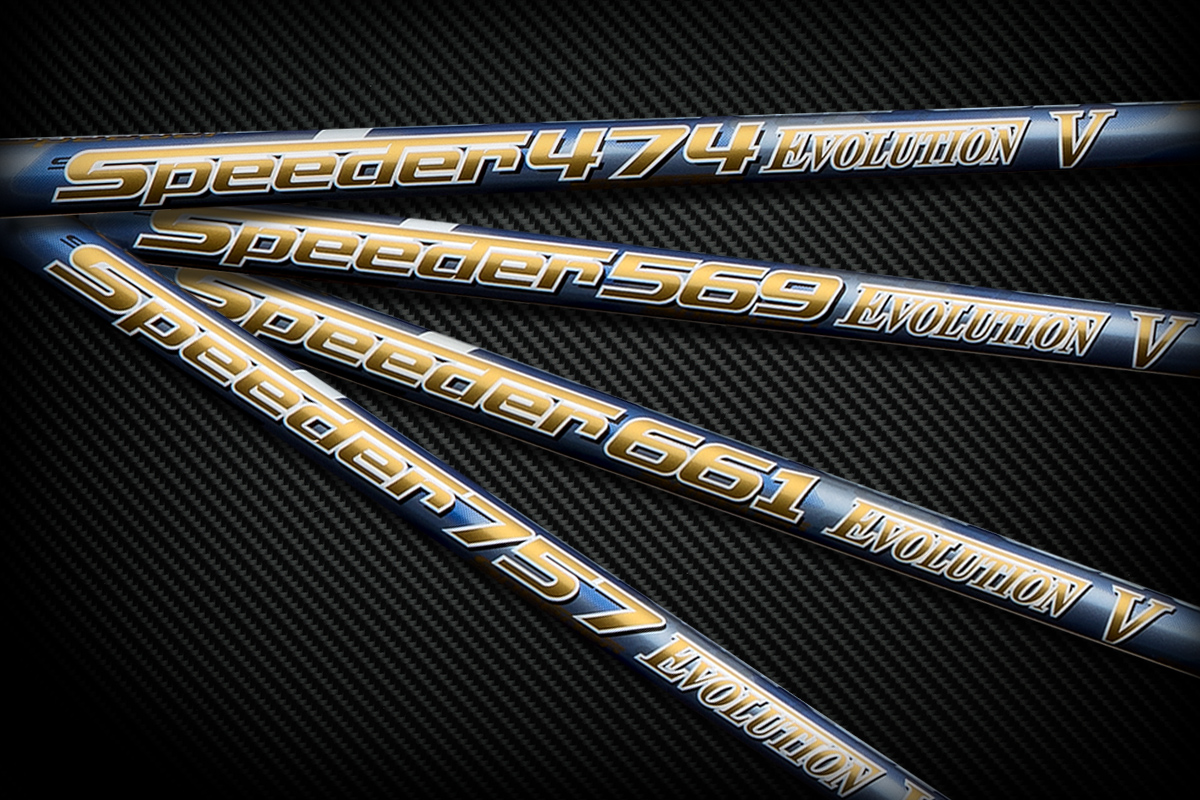 First Gen Speeder Evolution used Toray’s T1100G carbon fiber along with 3 Axis technology which really established the fundamentals of the Speeder Evolution series that we have all come to love over the years.    Then Speeder Evolution III used T1100G + Metal Composite Technology (MCT) + 90T,   and now with Evo V they have all the technology used in Evo III and added yet another technology on top which is called Outer Bias Technology (OBT).    With this new OBT, the Bias layer which is normally found in the innermost layer, is moved outwards as the middle layer.  This bias layer is sandwiched in between the two straight layers which result in tighter dynamic motion that feels more like one piece.

The previous Evolution IV was more or less a successor to the Evo II which was tip stiff, low to mid launch shaft.  Evo IV used Mitsubishi’s MR70 instead of the T1100G together with MCT + 90T + OBT.   In essence, Evo V replaced the MR70 to T1100G.    So between the Evo IV and Evo V who should be using which model?

For the Evo IV, their concept behind the development of this shaft was a mid-kick Speeder that allows hitters to not worry about misses to the left.     The shaft was designed with high controllability in mind with superb distance performance.  This shaft is best suited for players who need help with consistent hits to the middle of the face as well as players with natural tendency to hook the ball and those who are hitter type players.   This tip stiff shaft allows hitters to go after the ball to produce a mid-trajectory shot without worrying misses to the left.

The Evo V has a concept more in line with the original Evo (Blue) that was so popular among the Tour including players like Dustin Johnson.  The Evo V is the new and improved version of the Blue Evo and currently being used by Dustin once again.   As most of you know, he is one of the longest drivers on tour and he can thank Fujikura for continuing to deliver these high tech shafts to help him mass produce monster distances each week.

The Evo V’s concept is a Speeder that promotes capturing of the ball.   What does this mean?   It means that players should be able to easily create a draw shot with this shaft.   And of course another characteristic common to all speeder series is that it brings very good distance performance.   The type of players best suited for the Evo V would be swingers whose misses are slices, but looking for added distance.  This active tip shaft is designed to provide good feeling throughout the swing and allows swinger type players to capture the ball at impact for a high straight to draw trajectory shots while minimizing the possibility of slicing the ball along with the benefit of producing more distance.

Over the last 5 years, the Speeder Evolution series have become a tried and true brand of high tech & high performance shafts that will help players put trust in their important shots.  Official release of the Speeder Evolution V and Evolution V FW is August 22, 2018.   It will come in four weight ranges for the driver shaft (under 50g to 75g)   and five weight ranges for the fairway shafts.  The new color scheme is a mix of Blue and Silver hinting that it follows the original Blue Evolution but adds more on top!