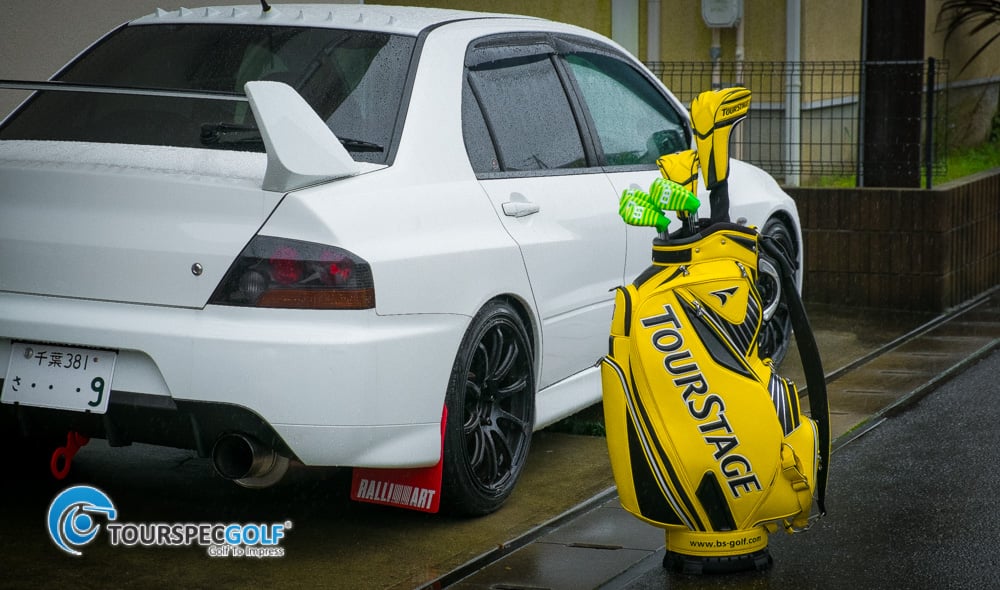 The PHYZ line is something we’ve rarely touched on in the blog but, with the brand restructuring at Bridgestone, PHYZ has come more into the spotlight, as the Bridgestone lineup targeting Japan’s largest segment of golfers, the average golfer. PHYZ has only been around since it’s introduction in 2011, so barely over 3 years. However it’s stock has continued to rise since that time. It was introduced at a time when Bridgestone was of course still Tourstage, and initially for many it was just another lineup in Tourstage’s pocket buried beneath X-Drive, GR and ViQ. There was so much overlap among the lines that they competed amongst themselves for market share. So with Bridgestone’s restructuring and rebranding here in Japan, there are now only two lines, the new J715 series targeting the better player and the PHYZ line which is aimed at the more average golfer.  The average golfer should be thankful that PHYZ is still around as it does a far more focused job at making golf more enjoyable versus the ViQ line which was originally slated as Tourstage’s average golfer line.

I actually happened upon reviewing the PHYZ irons and originally had no intention of doing so. 2014 has been a tough year for me in golf as I battled shoulder issues which kept me from enjoying the game for much of the last 16 months.  I went stretches of months where I didn’t play at all which to say the least, really sucked. In the past few months however, I’ve built back enough shoulder strength to start practicing again and I’ve been able to get a few rounds under my belt. Naturally that meant finding new clubs and I went searching for irons with very specific requirements. Those of you who know me know that I do consider myself an average golfer, someone who loves golf clubs and their designs and who loves the game of golf but doesn’t get out there nearly enough to become “very good”.  Taking all that time off didn’t help as well so my search called for “forgiving” clubs which translates into 3 things in my mind: 1. Easy to use, 2. Covers up mistakes and miss hits well 3. Automatic distance and accuracy.  Adding to the forgiveness aspect, I also wanted something lightweight due to my shoulder issues.  Irons are probably a weak spot for me so I decided I would try everything out there to see what would work.

One of the driving ranges I frequent out in Sakura happens to have a lot of demo clubs so every time I went to practice I would grab a few, and this was not limited to JDM models only as I tried TM Speedblade, the new RSi 1, Callaway BB Beta’s, X2 Hot’s, Titleist VG3 Type E, ONOFF Red, XXIO 8, PRGR Super Egg, Epon AF-703 and the list goes on. After trying out all these irons, I had to change my criteria a bit to include “FEEL”. Golf is very much about feel and my years of testing top flight irons for TSG have spoiled me thanks to being able to hit many of the most pure forged irons in Japan. Sadly some or should I say many of the average golfer (you may call them GI) irons lack feel or come across as simply hard. The TM and Callaway irons, while I liked there performance, I hated their feel (and before you jump on me about the feel, please keep in mind feel is subjective and we all perceive feel differently). A lot of this can of course be because of comparing cast irons to forged carbon steel but it’s more than just that. Feel of a club not only comes down to materials, but also the design, the manufacturing, the shaft, an even how the sole interacts with the turf, which all equal what kind of impact you get. That said, I have hit Ti Face as well as Maraging irons that feel very close to forged as well as irons with AS Rolled Faces or Super Spring Steel as they call it. 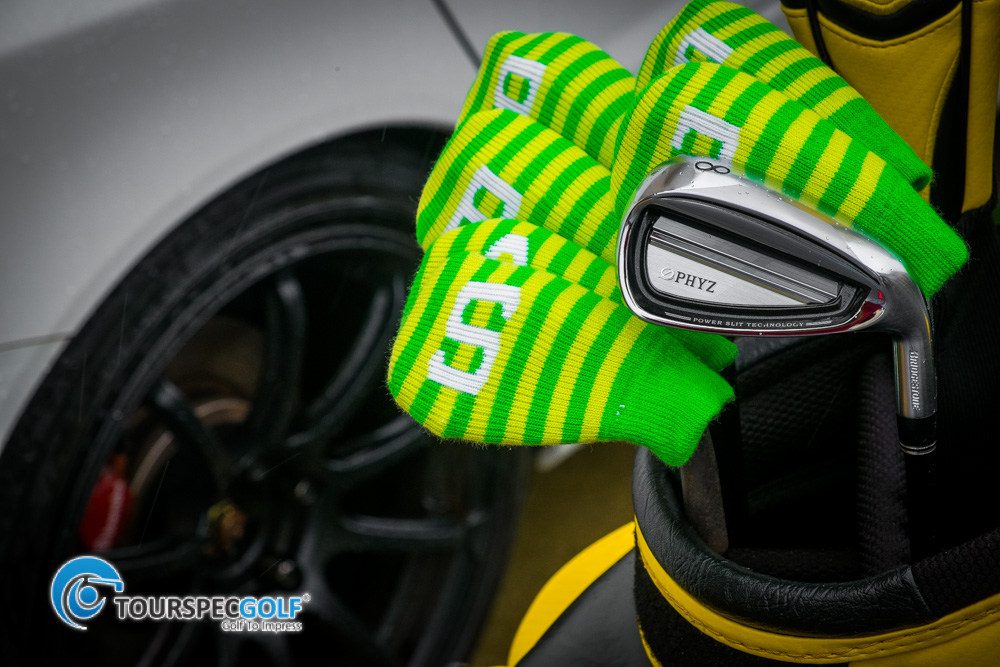 I was leaning towards XXIO or ONOFF both coming very close too all my criteria – I’m sorry I just could not get over the looks of the Super Eggs nor the feel, when I saw they had the new 2014 PHYZ III iron demo in the rack. I thought what the heck, I’ll give it a hit. I’m not going to beat around the bush. I BOUGHT THE PHYZ IRONS. So I guess I should tell you why.

Simply put the PHYZ III Irons were as automatic as any iron could be and unbelievably easy to swing and strike well. They very much live up to the concept Tourstage introduced when they launched PHYZ originally back in 2011. Human Harmonized Design they called it, clubs built from the ground up and specifically made to make the game of golf easier and thus more enjoyable.  The Human Harmonized Design was based on years of research about Japanese golfers and then production of PHYZ clubs to best suit the largest segment of golfers in Japan. Using 2010 data (the year before Phyz was launched), the following numbers were extracted:

Tourstage’s research found that as players got older, their biggest concern was a drop in distance due to less flexibility and strength. The majority of golfers in Japan are also average golfers, ie middle to higher handicappers and the predominant bad shot was a slice. As we all know this data is nothing new. However Tourstage decided that PHYZ would be its own stand alone line made just for these golfers and would tackle ease of use, distance and hitting a draw. We are currently in the third generation of the PHYZ line hence the name PHYZ III, and they’ve taken the technology a step further by introducing slits ala Taylormade but with their own touch. 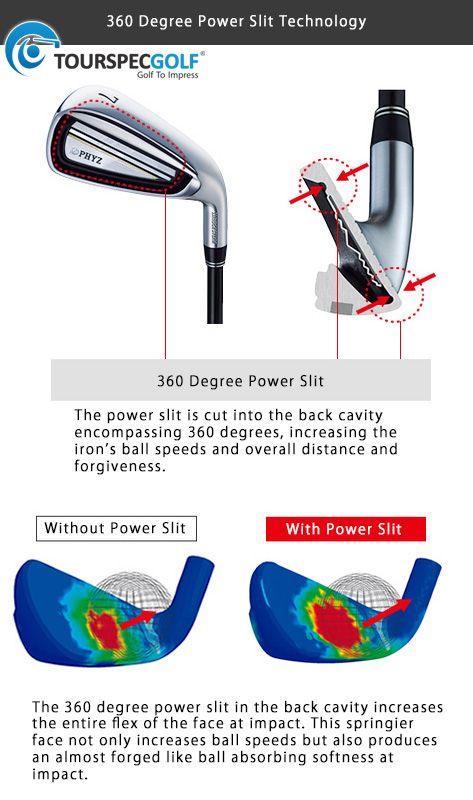 The PHYZ III’s main draw is it’s 360 degree power slit which is a slit that circles around the entire back cavity unlike Taylormade which had slots in the sole, and now on the face toe and heel as well.  An iron’s face is far less flexible than a driver’s face which means less spring effect and a smaller sweet spot. The 360 degree power slit increases the spring factor of the face and in turn increases the sweet spot and ball speeds at impact. To be honest I was not aware of the head’s design details until after I tested the iron but now that I do know about the slit and it’s intention I have to say that it truly works as the distance is well above average and the ease of use is pretty much in the automatic category. Even a bad swing produces pretty good results. 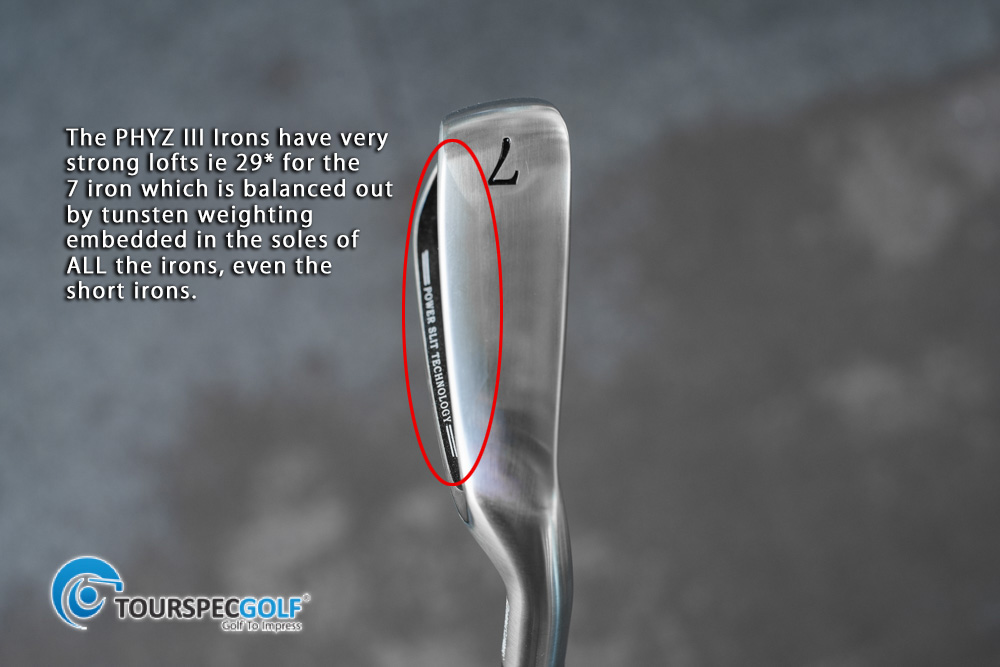 In the June issue of Golf Digest Japan, the most current irons on the market here were tested and the PHYZ III Iron was the longest in distance with the 7 iron averaging 180y for the tester which was number one for distance in the test. I can’t hit the 7 iron 180y but I was very happy to see the ball approaching 155-160y (Regular flex carbon shaft), and this is every shot with a very repeatable ball flight and great direction – straight with a soft draw.  Besides the power slit the PHYZ III also benefits from strong lofts, ie a 29* 7 iron. Lower lofts would give a stronger ball flight but the PHYZ III has a low CG and high launch due to tungsten being embedded in the sole of every iron. Tungsten weighting is of course nothing new however its typically only used in long irons and sometimes mid irons to help get the ball up in the air. The combination of strong lofts, low CG (making it easier to strike the sweet spot as well) and the 360 Slit helps make PHYZ one of the longest if not the longest iron out there. 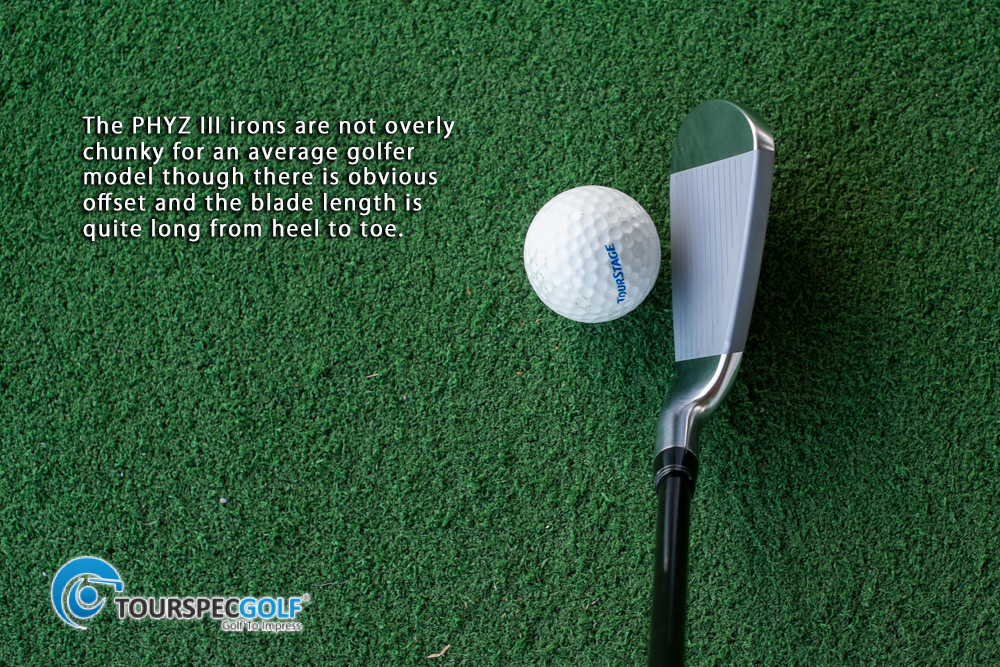 At address, it’s thankfully not overly chunky like some average golfer models/game improvement irons might be. There is obvious offset which does its job in helping the iron head square up to the ball at impact and the toe to heel length of the iron is on the long side. The size of the head inspires confidence at address without being distracting. Some people will say there is too much offset but this is afterall an average golfer iron and the offset does indeed help produce that very nice baby draw I kept getting. 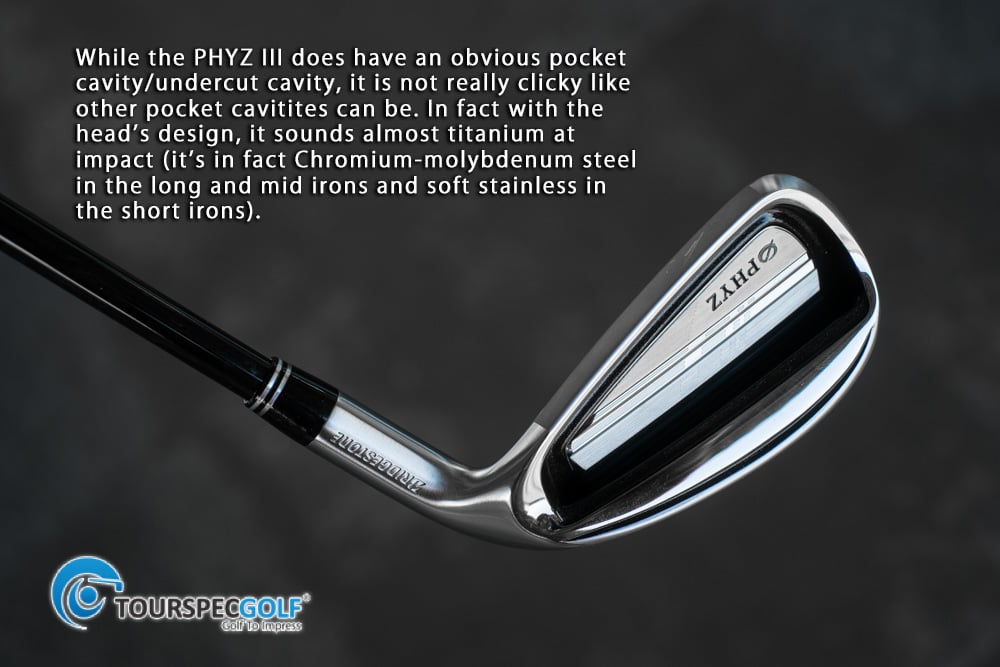 Now the truth is there are many irons out there these days that are pretty forgiving and very long but I chose the PHYZ III because of it’s feel (and the fact that its top class for forgiving and long). As I had mentioned earlier in the post, feel is as important to me as performance. I can’t hit an iron if it feels like crap and may of the irons I tried simply felt to firm and too harsh when even only slightly off center. With the PHYZ’s huge sweet spot, slit and Chromium Molybendum head, it felt like a forged iron for me. Even on miss hits the feel was very satisfying and there was no harshness. How could I tell I miss hit the ball then? I really couldn’t without looking at the ball mark left on the face as the ball flight and distance were almost identical to hitting the sweet spot dead center. For some people this may be translated as a lack of feedback but for me, feeling the ball compress on the face and shoot off the face is more than enough, and is the feedback I want.

The PHYZ III irons is without a doubt one of the most automatic irons I have tried in recent years and I’ve tried everything that has been released in Japan. It’s light weight, easy to swing, the carbon shaft and head match up very well and when I say match up well I mean by timing and feel, the sweet spot is huge, the launch is easy and high and the ball flight is very much anti slice. It does it’s job at making the difficult game of golf easier and more fun and is a must option to be considered for any golfer who needs help with their iron game or simply wants something automatic to play. If I had to think of a negative or draw back it may be in its bland looks, however that is something that can be forgiven due to its overwhelming performance.  It’s nice to have an iron you have confidence in to the point you don’t have to worry about how you swing but just swing. It’s an added bonus that it feels nice too which in the end is why I went out of the way to purchase a set myself.   You can find one too in the TSG pro shop.