Taylormade Japan is a brand that always provides Japan market only models to satisfy the demanding Japanese golfer ready to spend his or her Yen on premium quality. Instead of offering a similar lower cost, 17-4 stainless steel model fairway wood, (well they actually do in the standard R11 and RBZ), TM decided to release an all Ti R11 fairway wood as well the Gloire all Ti Fairway wood. Before I get out and hit the two, I thought I would do a side by side comparison so that potential buyers can understand the differences. 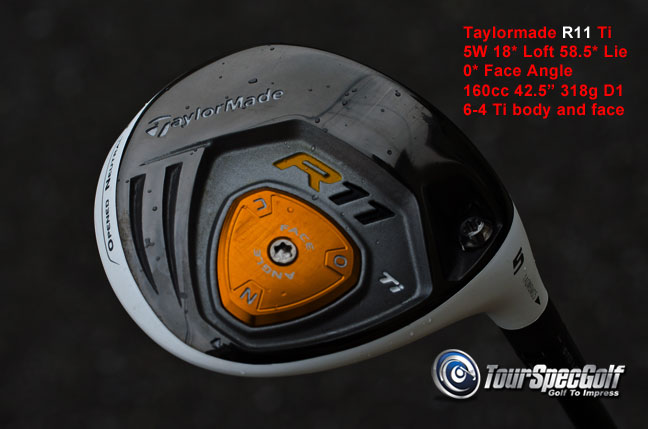 The R11 Ti is similar in shape to the standard R11 fairway wood but sports different colors and a different IP smoked finish. Besides its physical looks, the Japan market R11 Ti also features a larger volume head with Titanium body, crown and face. Overall the club is about 16g lighter than the standard R11 which along with the Ti material increases swing speed and distance. The R11 Ti is aimed at the improving golfer and average golfer who wants an easy high launch in a mid to smaller sized head. 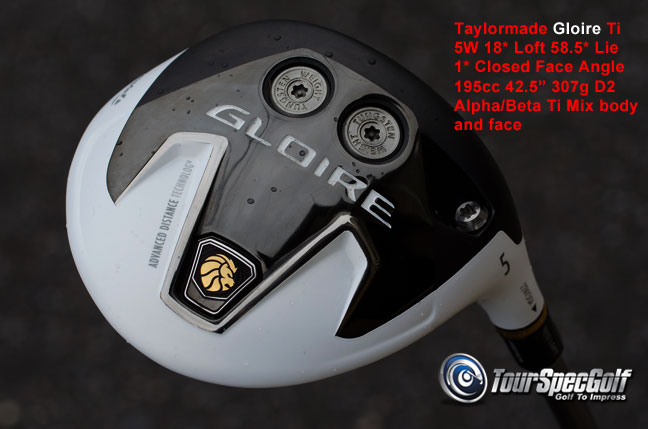 The Gloire Ti FW is part of the premium Japan Only Gloire line.  Made for max performance, ease of use and distance, the Gloire FW is even bigger and lighter than the R11 Ti and the 5 wood tester I have rivals some of the bigger 3 woods. While like the R11 Ti, it sports a full Ti head, it uses a more expensive Alpha/Beta Titanium mix for the body and a beta Ti for the face. The Gloire is aimed at the average golfer and senior wanting a premium light weight performance club.

Because the Gloire has a bigger head at 195cc vs 160cc (both 5 woods), it actually has the deeper and larger face of the two heads.  Both are more than adequate for teeing off and of course both feature adjustable sleeves which alter loft. 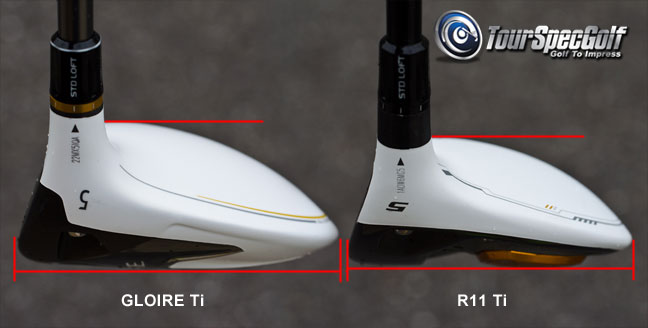 From the side you can see that the Gloire is quite a bit longer from front to back vs the R11 Ti. Both are high launch models but the Gloire with its long head really allows the CG to be placed deep in the head. However as you can see from the sole picture above, it has a pair of tungsten weights placed forward on the head to control spin and launch by balancing the CG low and forward. 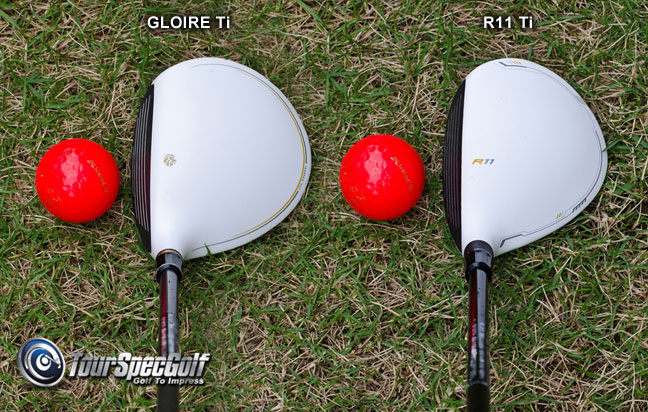 At address again, you can really see the size of the Gloire vs the R11 Ti. The Gloire head is rounder and while it is spec’ed on Taylormade’s website as being 1* closed face, it looked very square to me and just as square as the R11 Ti which is spec’ed as 0* face angle. Both heads with their white crowns and black faces frame the ball well. I was not a fan of the white heads when TM first introduced them but I’ve admittedly grown to liking them. So both the R11 Ti and Gloire are high quality all Ti fairway woods aimed at easy launch, big forgiveness and big distance. The Gloire can be considered on the large side and ultralight side as it offers two shafts, and with the lighter shaft borders right around 300g!

In the next week I will try and find some time to hit both side by side against the Ryoma FW and the egg Spoon, two very highly regarded fairway woods here in Japan. In the meantime you can already find both these fairway woods in the pro shop!