It’s been a great first 6 months of 2013 for S-Yard golf, with the releases of the T.388 driver, Bold Wedge, XV Driver and now the XV fairway woods. At TSG we have seen the FW segment really dominated by the Ryoma fairway woods and PRGR egg Spoon plus a splattering of other brands like Royal Collection, Yamaha, ONOFF, Romaro and Tourstage rounding up the popular choices. The new XV Fairway wood from S-Yard aims to leave its mark firmly in the midst of all these great fairway woods thanks to Kobayashi-san’s vision of how the XV FW will compliment the XV Driver. For those of you who read the introduction and review of the XV Driver here, you will obviously see the resemblance between the driver and fairway wood. 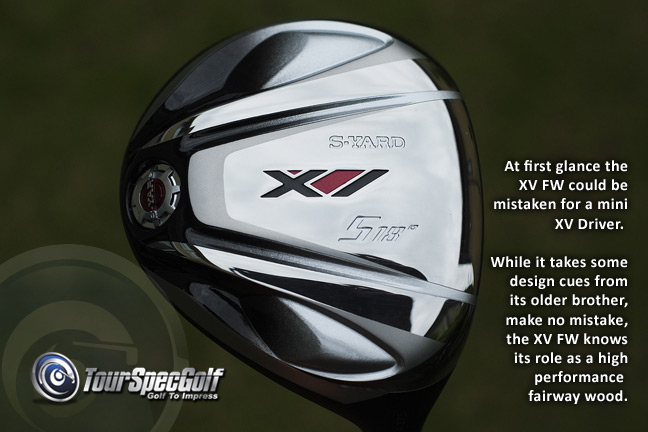 The new XV Fairway wood could pass for a mini XV Driver based on its aesthetics. However the XV is designed to focus on performance as a fairway wood and not a driver replacement (though I’m sure some players could use it as such).  Kobayashi-san knows that less and less people seem to be using fairway woods these days so he sought to create a club that would not only satisfy the better player but still be reasonably easy to use. While the head sizes of the 3W and 5W are actually considered to be on the large side at 190cc and 175cc respectively, again through Kobayashi-san’s carefully thought out designs, the heads in no way appear that large. The slightly larger volumes allow for more flexibility in CG placement as well as increased MOI. Kobayashi-san focused on the head shape of the XV to compliment and be just as eye pleasing as the driver.  He also decided on slightly flatter lie angles which will appeal to the better player (57* for the 15* and 57.5* for the 18*). 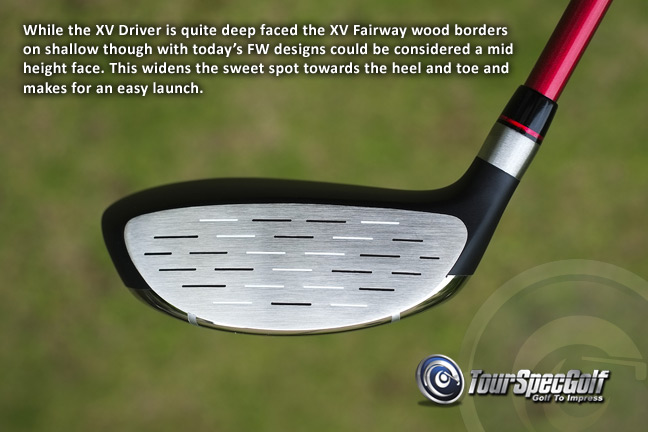 The XV Fairway wood is not a deep face like the driver is which is probably a good thing. The sweet spot is actually easier to meet for the average golfer since the face is not so high.  Some may call this a shallow face but in this day and age when fairway woods are shallower than ever, this is probably considered shallow to mid height.  The XV utilizes a specially rolled Maraging steel face.  Kobayashi-san went with maraging steel because of its strength and flexibility. Because maraging steel is stronger than both Titanium and stainless steel, it can be made thinner allowing for more elasticity  as well as weight savings in the face to be move to perimeter weighting for a stronger launch and less spin. The thinner more flexible face increases initial ball speeds and overall distance over Ti and SUS.  I love the feel of the XV, it has a hot and crisp touch at impact and this feel is very consistent across the face. One of the things I do on all woods is what I call the tap test. You can use your fingernail or a tee and tap across the width of the face from toe to heel making note of the pitch of the sound.  The optimal ting sound is of course in the center and as you move outwards away from the center the tapping sound usually dulls or muffles. The XV, even as you move off the center towards the toe and heel, it still maintains a similar sound to the center meaning those sections of the face feel just as good and hot as the center. It may be just me but I actually do this with all the woods I test as feel is one of the most important things for me. I also feel like I can find a bigger sweet spot by doing this. (^_^) Yes it sounds very primitive but try it , different clubs will produce different results. 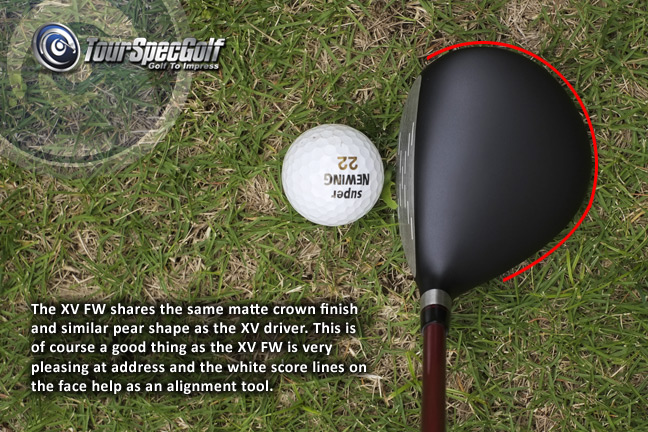 At address you can really see how the design, shape of the head and finish really hide the size quite well. The 5W above is 175cc but thanks to its pear like shape and matte finish like the driver, it does not look that large and is quite eye please. Both 3W and 5W have square face angles and my tester was in fact square. The lack of an alignment mark keeps the head nice and clean but you can still setup well using the white score lines on the face which are noticeable at address. 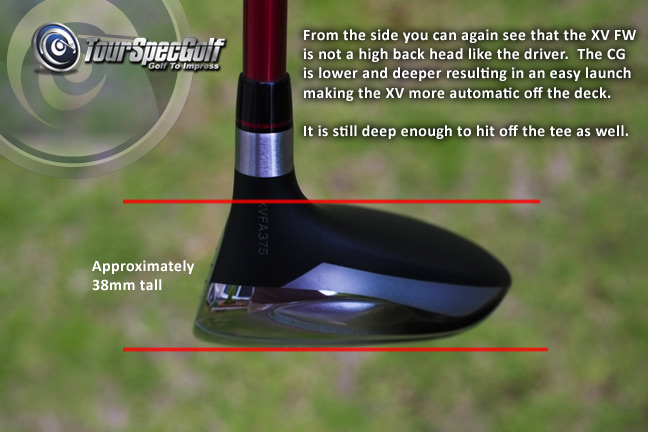 The XV FW’s shorter face and the head’s semi shallow back design make it easier for hitting off the deck. The CG is lower and deeper due to the head design and what this results in is a nice strong launch. I found it quite penetrating and with good run after hitting the ground. 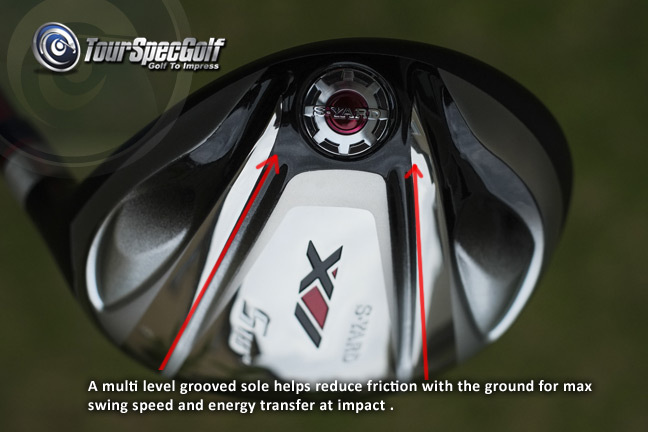 The sole looks like the XV Driver but it features a gentle curve and grooves along the side to produce better follow through in the turf at impact and more versatility on various lies. We all know that the friction caused by a fairway wood touching the ground before impact can result in lost swing speed and less distance and less than optimal impact. The design of the XV allows for minimal contact and he grooves seem to lead the head to the ball. Turf interaction is very good though I was hesitant to hit any balls from deep rough with the XV due to its shorter face height. 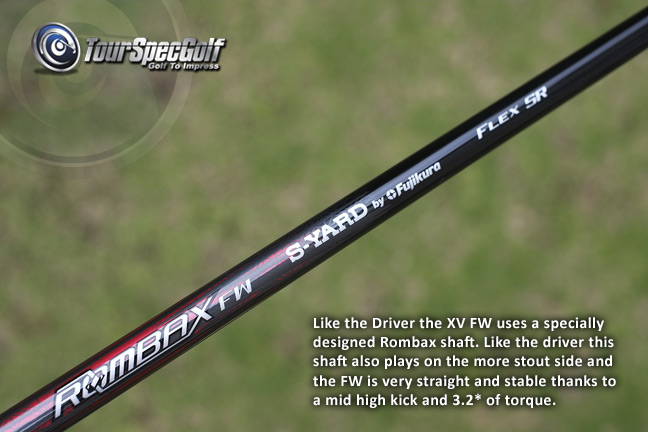 The stock shaft is again a Rombax from Fujikura specially made for the XV series. The Rombax FW is 3.2* of torque and around 65g with a mid/high kick. I have the SR (stiff/regular) flex here and I must admit it feels quite stout. Overall clubweight with the Rombax is very healthy at over 335g. What this combination equals is very good control, stable ball flights and shots with no ballooning. Like the XV driver, I really love the feel of the fairway wood. Its one of those clubs where you pause to relish the feel after each shot. Performance wise, the XV is by no means the longest FW out there, nor is it designed to be. Distance is left to ultralight fairway woods like the egg and Ryoma F which barely weigh more than your driver. The XV is an all around performer. It feels very good, is reasonably easy to hit, and is very stable and straight.  In the end, all these characteristics (well maybe feel aside) equal more overall distance with more balls in play.

I’ve really only gamed two fairway woods in the last 2+ years, the egg spoon and the Ryoma F.  There is no doubt these two clubs are long but I will now replace the Ryoma with the S-Yard XV FW because I prefer the feel and its overall performance is not something I cannot ignore especially when I am playing on narrower tighter courses. Those who like the XV and T.388 drivers, the XV FW is a great compliment. For other players looking for a traditional shaped, square faced and reasonably flat FW that is pretty easy to hit and produces stable and straight shots, the XV FW should be at or near the top of your list.