What makes the Ryoma D-1 so damn good?  I must admit I hopped aboard this bandwagon a bit late, I sat on the sidelines and watched while others posted what looked to be unbelievable distance gains matched with complete face forgiveness.  Was this hype? Could it be the infamous honeymoon period we know happens when you buy a new club?  It was my turn to find out… 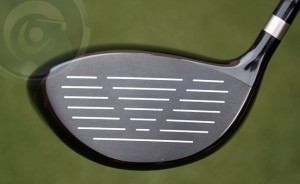 In a nut shell what makes this driver such a monster is it’s 60 gram power booster weight in the back.  Usually you see 10-15 grams in a driver, you heard me right 60g!  It pulls the center of gravity so far back low and deep in the head that it increases energy transfer to significant levels for the ultimate slingshot effect.

On top of that Ryoma utilizes something called “DSI” it stands for Deep Strong Impact and it’s basically a one piece unibody produced of forged titanium.  It’s a construction features a body that is only 0.35mm thick which is about half the thickness of current drivers on the market.  Some brand’s get their crowns that thin but not the entire head.

To keep stability and structural integrity Ryoma has stabalized the inner frame. If your the technical type and need charts with specific information and diagrams please “click here” to view this listing. 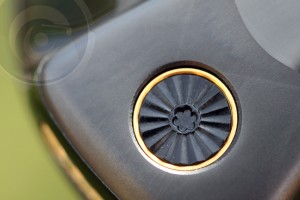 All this technology creates a mid launch low spin driver.  It’s Ryoma’s opinion that mid launch with low spin creates the best angle of descent and the most run… plus in most cases the most stability and control.

On average people are gaining 10-15 yards, some even 20-30 yards and not in a sloppy whippy carry bomber kinda way but rather a controlled  intentional and piercing trajectory that’s very accurate.  Sound to good to be true?  Right tell me about it, that’s why I had to review it for myself…

Distance: I swing around 100 mph+ with a higher ball flight than most and that’s why I opted for the 9.5 V-Spec.  I’ve hit what could be the longest drives of my life with this setup.  Ryoma 9.5 V-Spec w/Muzzik BangVoo Preium S-260 cpm I usually average about 240ish now I have been in the 260+ range.  It’s what keeps me a float when playing with longer hitters. Longest driver I have ever hit.

Forgiveness: I’m totally gonna sound like a Ryoma fanboy now but it’s forgiveness was phenomenal!  My mishits are usually near the heel, it really didnt make much of a difference where as with other drivers that would create a big fade or slice this one sailed straight with a tiny fade at the end.  Distance loss was minimal and I gotta attribute that to the 60g power booster it spreads that weight through the club head making the CG so deep and far back that it projects mass behind the entire face and impact zone. Most forgiving driver I have ever hit.

Feel: It’s got a firm forged feel to it, I would definitely rank it in my top 5 best feeling drivers of all time.  I’m sure it’s not the best I’ve hit but it’s pretty darn outstanding.  I tend to gravitate to clubs like the Epon 460ZR, Kamui, and Crazy CRZ 460 when it comes to feel and I would put the Ryoma in that level of perfection at impact.  Listen to the sound in the video review coming up.

Trajectory/Dispersion: This is where it shines, I can hit most 9.5’s high by teeing the ball up but with the Ryoma V-Spec it was medium all day.  I did get the ocassionally higher flight resulting in distance lost when hitting into the wind but with all variables like wind gone it was simply the perfect medium trajectory.  The ball dispersion was nice and tight and much of that I can attribute to the Muziik shaft as I do know the stock Ryoma shaft flew high and wild for me.  Very straight and very accurate was my result with a forward kick and lots of roll.  I repeat lot’s of roll with this one when combined with the proper model shaft.  I’m always looking for a driver that provides the right trajectory on both windy and calm days.

Design: In the beginning I was honestly not a fan of its looks, but while in Japan I held a V-Spec and was surprised that the 60g power booster could not be seen from above. The black finish is highly durable, I’ve drop kicked this club a few times and where as other black drivers would scratch heavily this one didn’t.  I keep going back to the 60g power booster and the stabilized unibody frame support within it’s forged titanium head.  Something so obvious and overkill I’m surprised other golf club companies have not picked up on it.

All in all the Ryoma V-Spec has converted me, It sit’s FIRMLY in my bag which is no easy feat as I have over a dozen of the hottest drivers with aftermarket shafts at my disposal.  I highly suggest this head and I highly suggest the Muziik BangVoo Premium shaft as well. It’s a triple axis 70T carbon shaft that is VERY PREDICTABLE in the sub 70 gram weight range.