It has admittedly been too long since we have blogged. These last months have been busier than ever and it will only get busier with many new releases on the horizon. I will try my best to blog as much as I can over the coming months to introduce all the new products for 2014.

I was at Gold’s Factory in Tokyo yesterday to take care of some custom jobs we are doing for TSG customers. I decided to take the opportunity to snap some photos of the weights and inserts that Gold’s Factory provides. Many times when helping a customer create their custom master piece, they are confused over all the different type of insert options that Gold’s offers.  Master Sasasya has created names for these inserts but when I tell a customer they can put Orbit around G in the sole and Arc Reactors in the cavity, they usually have no idea what I am talking about. So I thought snapping some photos would help people visually identify with these weights and inserts. I will also do a post in the future about face millings and face insert options from Gold’s Factory. Its important to know that  every single insert used by Gold’s Factory and that you see in these photos are machined from scratch by Gold’s factory. Because of this, they can control quality and vary the size, weight, and colors of all the inserts they do. (as I have mentioned before as well, Gold’s even machines their own tools!) Many of the weights are of course for practical purposes, ie in order to bring head weight up or shift the COG/bias of the putter. Some of these inserts are of course more for aesthetics and really help each custom job look very cool. 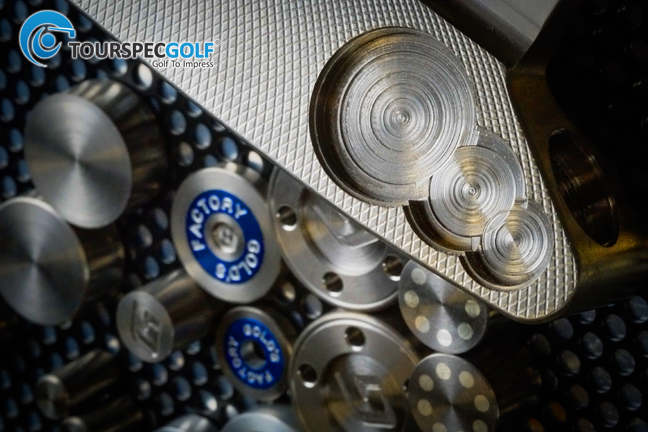 For those of you who own a Gold’s Factory or have seen one in person, you can attest to the top notch work Master Sasaya does from perfectly cut holes on putters to perfectly machined weights and inserts that seamlessly fit them. For those who have not seen my previous posts on visits to the Factory they can see some of the machinery and staff in action in these posts:

So read on and I can go over some of the weights and inserts. 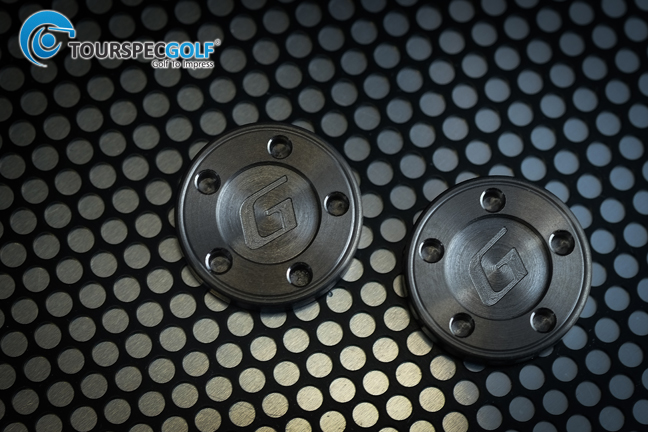 The most popular modification for putters is to increase the head weight and many like to use Gold’s Factory’s “Orbit Around G” weight. As you can see from the photo above, it looks like small moons orbiting around a G mark. Since Orbit around G weights are tungsten weights machined from scratch, Gold’s can control the size (diameter), thickness (depth or height of the weight) and in turn how heavy the weight is. The size and depth of the weight is not really a choice of the customer. The customer typically gives a target head weight, ie he wants his head to go from 340g to 358g and depending on the style of the head as the space and depth allowed for drilling holes varies on every putter which limits the max size and weight to be used. So if its a head like the Anser No 2 or a Newport style head, the flange area and bumpers are thicker and have more mass and allow for larger and deeper tungsten weights to be used. We also have to consider that while adding tungsten weights to the head, there is also weight lost from the material that is machined out for the holes. Typically depending on the size and depth of the inserts, gains range from 12g to 25g overall. And after that Gold’s can always add some nice touches with a variety of paintfill or custom colors to suit each person’s tastes. 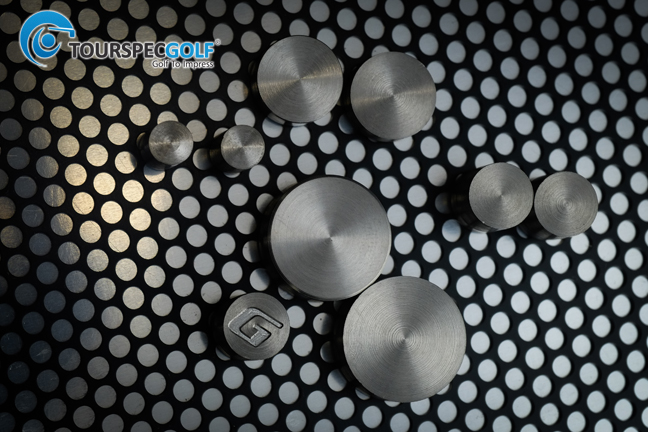 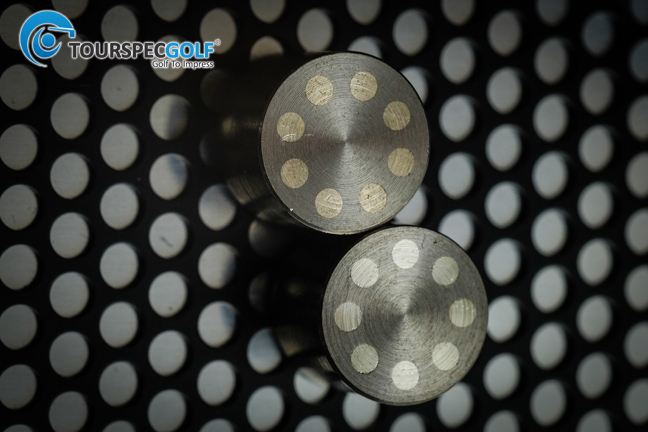 While the Orbit around G weights are the most popular these days, Gold’s also offers more basic type tungsten weights that can come in all different sizes. Because these weights can be made so small, they can also fit on top blades of putters, in bumpers and are quite versatile for fitting.  The photo directly above shows what Gold’s Factory calls Orichalum weights.

“Orichalcum is a metal mentioned in several ancient writings, including the story of Atlantis as recounted in the Critias dialogue, recorded by Plato. According to Critias, orichalcum was considered second only to gold in value, and was found and mined in many parts of Atlantis in ancient times. By the time of Critias, however, it was known only by name. In numismatics, orichalcum is the golden-colored bronze alloy used for the sestertius and dupondius coins. In many sources of pop culture, such as novels and video games, orichalcum is presented as a valuable ore that can be mined and crafted into powerful armor and weapons.

It is also mentioned several times in Japanese anime . Several anime use it such as “Slayers” (Lina Inverse has to fight a golem in one episode that is made of it), “Saint Seiya” (gold saint, Aries Mu uses Orichalcum to recreate bronze saints’ cloths), Black Cat” (all Chronos Numbers weapons are made of Orihalcum), and “Hyper Police” (Sasahara Natsuki’s dagger [tanto] was cut down from a broken sword [katana]). In each case, the metal is akin to a steel alloy that is much stronger, and almost indestructible.”

Yes got the above from Wikipedia. So what Orichalum is for Gold’s Factory are tungsten weights with 8 holes drilled around the edges. These edges are then filled with either copper or GSS (SUS303) “rods” and machined smooth to give the appearance you see above. These are a very classy looking weights and you can see some examples of how Gold’s uses Orichalum below. In the first photo it is used in the face overlapping with plain tungsten. There is a lot of very fine machining going on to match the cut tungsten perfectly. 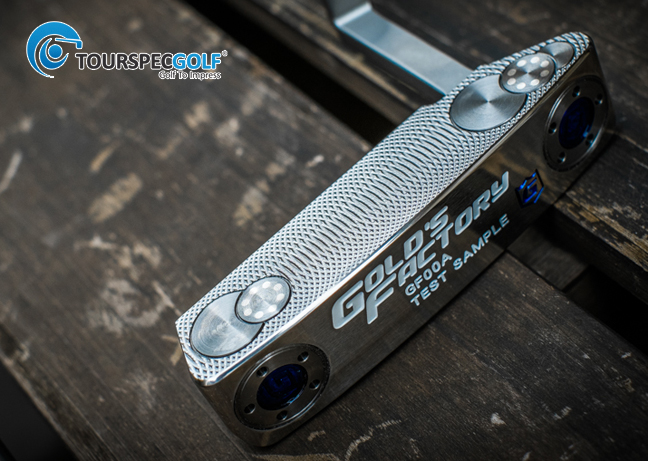 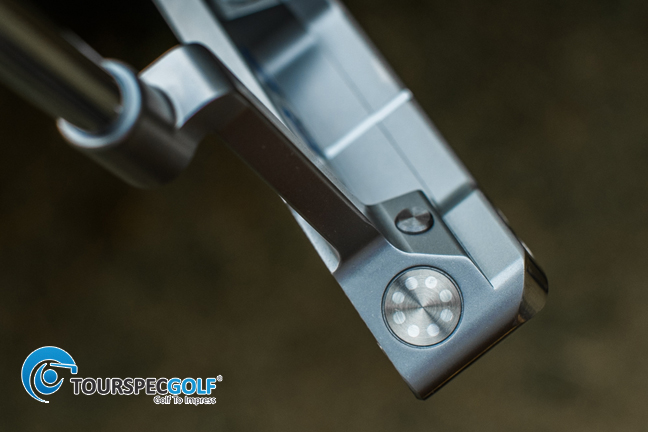 The photo above shows how the Orichalum weight has been inserted into the heel of the putter. There is also a smaller tungsten weight on the shoulder. If the balance and bias of the head is towards the toe, Gold’s can move the COG ever so slightly with weights in certain positions like what you see above. As you saw in my blog post  Craig’s Excellent Adventure: Gold’s Factory, the sweet spot or CG of the putter is not always in the center as we found on the Epon Zen. 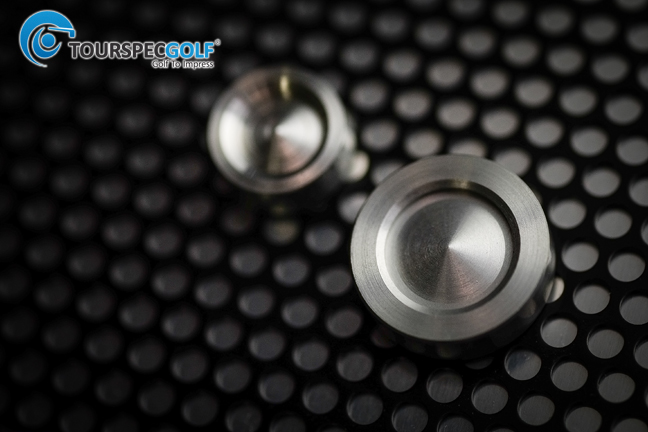 Next up we have some inserts that don’t really alter the weight in any way but look great for a visual upgrade. The first photo is what Gold’s calls the Arc Reactor. It is a machined aluminum disc with a beveled edge and convex point in the center. The Arc Reactor can also be made in several sizes and placed in quite a few locations for a very nice visual impact. The Arc Reactor can also be filled with any type of paint fill color. The second photo above shows what Gold’s calls the Bulls Eye. It is a 3 piece specially machined insert featuring a Tungsten outer ring, aluminum colored center ring with Gold’s Factory engraving and a tungsten center piece. The most popular spot for the Bulls Eye is usually on the face in the heel but again it can be placed anywhere. The last photo above shows us what Gold’s calls Alumite discs. They are machined aluminum discs made mostly for dress up and added style. Keep in mind though while the Bulls Eye does not change the weight of the putter, both the Arc Reactor and Alumite discs result in a net loss of weight after drilling and insertion. The weight is minor at a gram or 2 per disc, but it is still a calculation that needs be considered when working with a target weight. Below are examples of the Arc Reactor in the cavity, the Bulls Eye in the face heel and Alumite discs mixed with tungsten discs and an array of tunsten weighting below. 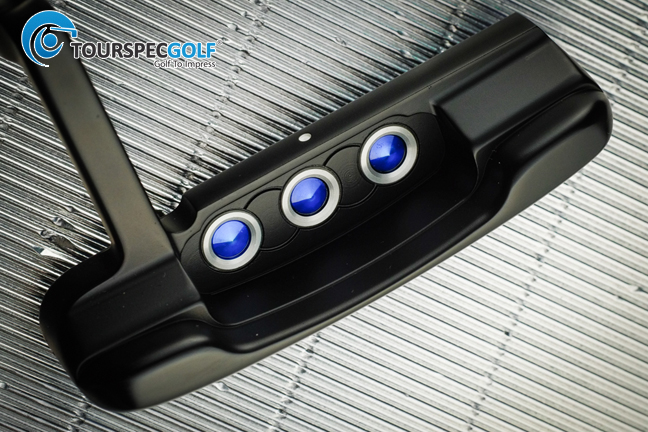 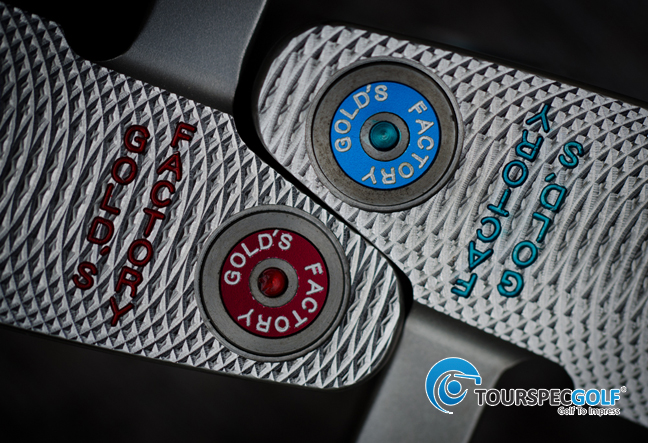 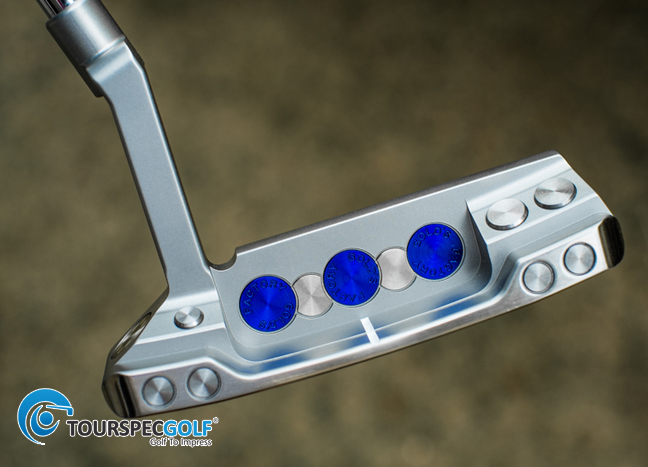 Recently popular as well have been brass inserts, which Gold’s can also machine in in different sizes and doing alumite and weights in black color which look very stealth on Teflon black putters or produce a bold contrast on SUS303 or any satin putter. 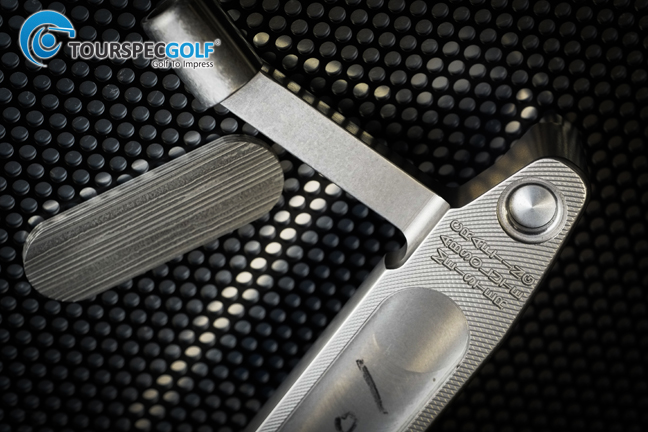 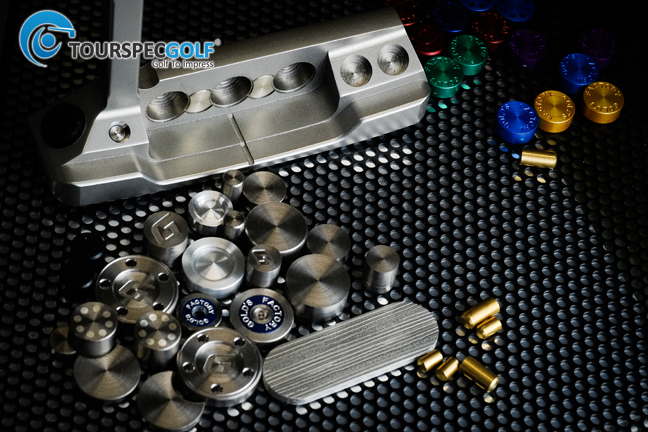 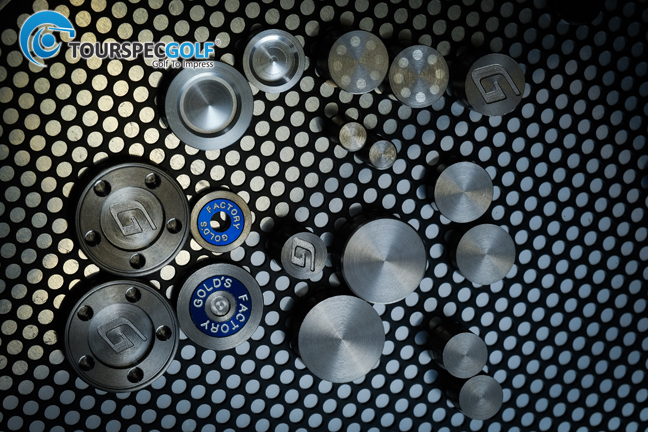 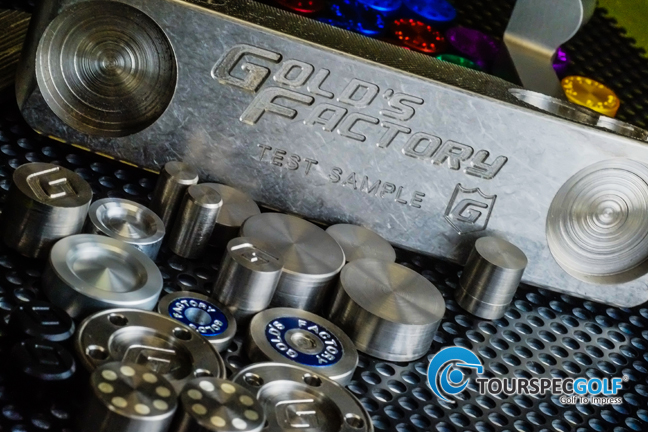 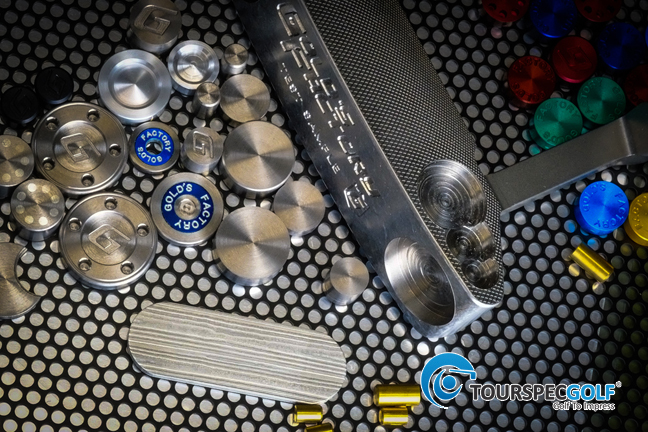 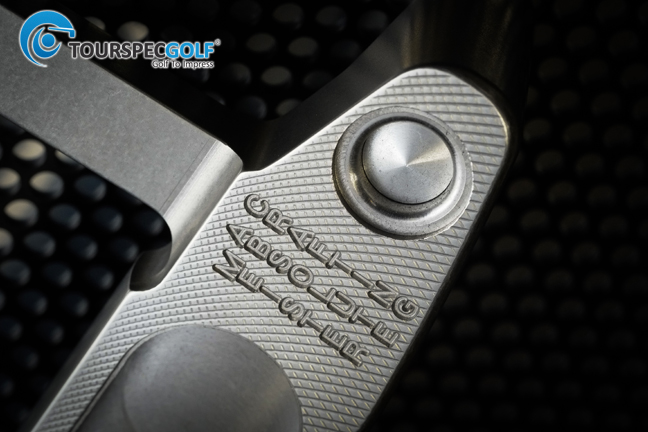 So there you have a quick look at some of the machined inserts and weights that Gold’s can do. These are just examples and Gold’s can always tweak each weight differently and they seem to come up with new ones all the time. Hopefully this will help a lot of customers looking for a custom Gold’s putter but had no idea what an Arc Reactor or Orichalum was. As always we are here to help with your master piece! Just give us a shout!