Gold’s Factory sent over a couple if their new Trinity series putters featuring the new Next Generation Premium Zone Milling. they are for a photo shoot I’m doing however it was a good opportunity to also test out the new milling for the first time and see the new Trinity weights and inserts. The two models I received are both based off of Gold’s Factory’s Anser No.2 head made from premium JIS SUS303 steel (also known as GSS in some circles). As with all Gold’s putters, they can be fully customized including lie, loft, head weight, type of milling, finish, weighting, engraving, types of necks etc. The sky is the limit. This is an intricate milling process with the cnc machine guided by HAND.

Compared to the original two Red and Blue Trinity prototypes, these two are far more clean and simple with only two weights in the sole and inserts in the cavity and face heel. Head weights are 350g but Trinity models can go as high as 380g or so depending on the type and number of weights used. Each weight is CNC machined right at Gold’s Factory on order and come in a variety of designs and sizes. The Trinity putters also feature the tri-level sole we’ve all seen on Tiger’s Newport 2, and the brushed non reflective satin finish for that pure and simple look. 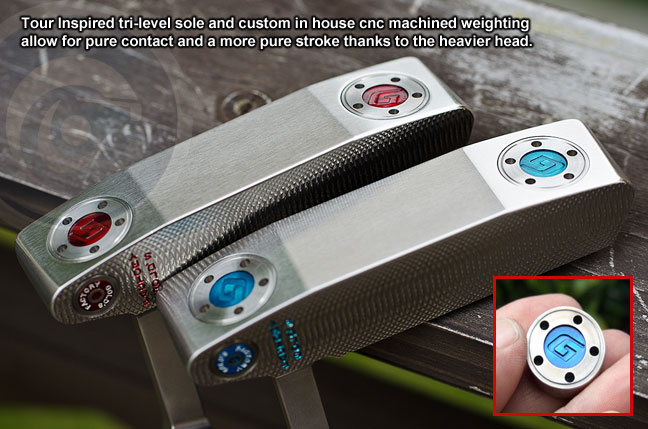 This was my first time rolling the ball with the new Next Generation Premium Zone Milling. Premium Zone milling was first introduced on the now defunct G-Field’s Premium Zone putter about 6 years ago (hence the name Premium Zone). PZ milling is known to give great forward roll and super soft feel. Master Sasaya further enhanced the milling angles by using overlapping half circles and zig zag patterns within those circles. These milling marks are at similar depths and angles to the original horizontal PZ Milling so the result is just as good forward roll and just as soft (if not softer) feel PLUS now reduced side spin. 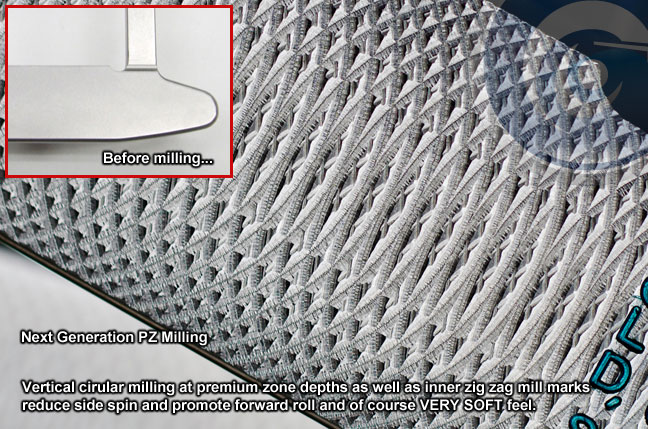 Feel is very subjective and one of the most debated topics is the feel of putters. Soft or crisp? Too soft? Too Hard? Not responsive, not enough feel? I do like a soft feeling putter but not to the point where I get no feedback. Some carbon steel putters and insert putters can be this way, too soft that you really can’t tell where on the face you hit it. The great thing about SUS303 is that it has a certain crispness to it and the Trinity putters have that combination of soft but crisp feel thanks to the face milling and material complimenting each other. Putting the ball is very responsive and with minimal skidding the putter face is great at promoting forward roll. At 350g, these two Trinity’s have great balance of direction and distance control. I tried putting with different balls which all have different cover firmness to see what kind of feel I would get from the Next Gen PZ Milling and every ball was responsive and produced the similar soft but crisp feel that I like. Hitting the putter off center is much more muted so you can clearly tell when you pure a putt simply by the sound and feel.

As always Gold’s can create your own custom putter or do some serious modifications for your existing putter. The sky is the limit for what is probably the most used club in your bag! Check out some of the one of a kind putters Gold’s has or base models which you can use to design your dream stick!