It’s hard to believe how fast time flies. Today is Valentine’s day which signifies that it is yet again Japan Golf Fair time! It’s interesting to note that Valentine’s Day is different in Japan from the Western world. In Japan, on Valentine’s day, you don’t find the guys scrambling for that last second gift whether it be chocolate or flowers, or something to impress their significant other or a girl they have interest in or any girl for that matter. 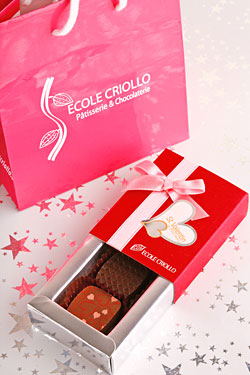 In Japanese its called “giri choco” which literally means ‘obligation chocolate’. Giri choco is probably the biggest part of Japanese Valentine’s Day customs. Usually girls give giri choco to male classmates, casual friends, co-workers, bosses, etc. Typcially giri choco is is not expensive chocolate. A box of chocolates, designated as giri choco, could be purchased from $2 up to $10. Japanese girls sometimes buy and and end up giving out 5, maybe 10, and sometimes even 20  boxes of giri choco to all the guys in their lives.

On the more extreme side, “honmei”, which means ‘sweetheart chocolate’ in Japanese, is usually much more expensive chocolate. Honmei is given to the men who are special in a girl’s life ie boyfriends or husbands or that guy they have always admired or wanted to be closer too.

Valentine’s day is a huge for businesses in Japan and right after New Years in January, you already begin seeing all the ads for Valentine’s Day. I was in Shinjuku yesterday and you can imagine the lineups at the department stores and candy stores of girls to get their last sec0nd chocolate. It’s crazy as apparently half the chocolate sold in a year in Japan is all sold for Valentine’s! In high school it’s quite easy to tell who the most popular boys are by the amount of giri choco or even honmei that they get. On a personal note I received 4 boxes today, homei from my wife and 3 boxes of giri choco from girls in the neighborhood which I sometimes golf with.

So for the guys, this all sounds way to awesome but there is a catch and we don’t get away unscathed. One month later on March 14th, Japan has White Day where the opposite supposed to happen. Guys are supposed to give back what they got (though I’m sure this does not always happen). In the case of honmei they have received, returning the favor with honmei can be like saying “I like you too”.  White Day actually began in the 1980’s and was started by the JNCIA (Japanese National Confectionery Industry Association) as an answer to Valentine’s day but truly a call for more business and sales.

Alright enough though about Valentine’s day as the real hot topic is the Japan Golf Fair which begins this Friday at Tokyo Big Sight in Odaiba!! Yah! The entire TSG crew will be in Japan for a couple of weeks to cover the event and bring you the best reports, photos and videos right from Big Sight. We’ ll be utilizing the blog more this year round and twitter as well. We’ve even got some forum members and customers joining us at the show for some club testing and just to hang out.

There will be lots of new clubs to see including:

JUST TO NAME A FEW! We’re also looking forward to what surprises the manufacturers may have in store for us as well as discovering new products and brands! So make sure starting this Friday you check out the blog frequently for updates and reports directly from the Japan Golf Fair!

Sunday Out of Bounds: New ADD Stealth Bumper on Raptor