We thought the ViQ had left us…

Earlier this year when Tourstage announced 5 new X-Blade models in a one time release including newly designed and forgiving X-Blade GR models, many of us in the golf industry thought it signaled the end of the ViQ line. The largest segment of golfers in Japan is comprised of the “average golfer” or as players in the West call it the mid to high handicapper. The ViQ line has long been a mainstay at the top of the sales charts for the average golfer battling perennial rival XXIO.

However in the last few years of ViQ models, we saw more tweaking of models rather than new innovation and the ViQ line’s popularity waned a bit as companies like ONOFF, Fourteen, PRGR and of course American brands like Taylormade and Callaway ate into the ViQ’s average golfer market share with new designs and awesome performing clubs. Tourstage was quiet since its most previous ViQ launch back in early 2008 but it turns out they were in fact taking the time to completey revamp the lineup with a visual, technology, and design overhaul.

But it is back with a new look and purpose…

So I received the new ViQ iron which looks nothing like the 2008 model. This is a very flashy iron and Tourstage boasts a lot of performance from all the new featueres it has put into this design.  With the X-Blade GR C-1 and P-1 comfortably satisfying most mid handicap players in Japan, it looks to me as if the ViQ has shifted its focus toward the high handicapper head in the average golfer group. The 2010 ViQ is designed as an automatic iron for maximum forgiveness and maximum distance.  I don’t mind high tech looks but I find the new ViQ a bit too shiney and a bit too busy for my eye. Let’s see if this high tech pays off where it really counts, feel, performance and forgiveness. 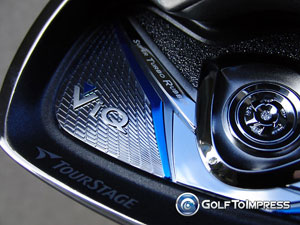 The 2010 ViQ utilizes several features to improve feel and forgiveness including a badge like emblem in the center of the cavity right by the sweet spot. I cannot help but be reminded of Taylormade’s Inverted Cone at least visually from the outside. On the inside it is different as that badge covers Tourstage’s Super Turbo Rubber which is meant to increase ball speeds at impact through its rebound characteristics and also improve feel but dampening impact. Feel is subjective and some people might like this and some might say it takes away too much feedback.  For the high handicapper its probably a good thing to minimize vibrations on miss hits and create any extra ball speed. 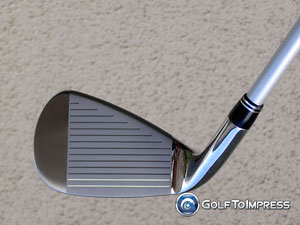 In front of the Super Turbo Ruber is a 1.85mm thick (or you could say thin) Hyper Maraging Steel face. There has been a huge shift in Japan when it comes to use of materials in average golfer irons and fairway woods from Titanium faces to Maraging steel faces.  Many manufacturers are finding that Maraging steel provides great feel and performance results. Maraging steel is supposedly stronger than Ti so it can be made thinner for a more explosive impact. Makes me wonder when it will show up in a driver. Many of the top average golfer ions in Japan, including models from ONOFF and PRGR all use maraging faces now and the feel is excellent.  The 2010 ViQ also feels very good or should I say feels like almost nothing when you pure the sweet spot. The Super Turbo Rubber is at work here.

Automatic distance at your calling… 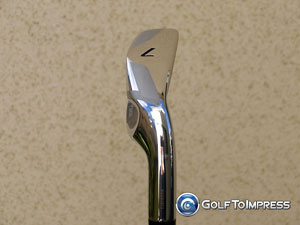 The new ViQ places a lot of weight down low in the sole for a very low CG helped by two tungsten weights, one in the toe and one in the heel of the sole. Both these weights also have Super Turbo Rubber under them to again help enhance, or for some take away feeling. There is a an undercut cavity here which progresses higher towards the toe and towards the heel to widen the sweet spot on typical average golfer misses towards the toe and heel. Because the tungsten weights are so big the number indicating the iron is actually right in the middle of the sole. So with all the new design features and a wide sole, mid size top line and definite offset, is this an easy iron to hit? Yes it is. It sure fits the bill as an automatic iron. The low CG and strong lofts (24* 5 iron and 44* PW) provide some serious distance and is very easy to hit straight. The ViQ is not a shovel like some GI irons in the West but it is definitely larger than other mid sized irons and will give that higher handicapper enough confidence at address. It’s size does make it easy to hit.

Another thing that made the demo I had so forgiving is that it is shafted with a Tourstage graphite.  Tourstage uses ultra light 55g mid kicking graphite which really help those slower swingers pick a a few miles per hour. The 5 iron weighs only 357g total weight. Thanks to the strong lofts the shots do not balloon but climb steadily reaching an apex and finishing with a rather soft landing especially in the short irons.

It does what it supposed to do…

So in conclusion, while I am not thrilled with the iron’s overall look and I’m not a fan of too much offset and bigger head, the truth is, looks aside, the ViQ does what it is supposed to do. Be an easy iron to hit and give the higher handicapper the automatic performance they are looking for. Many traditionalists and better players may doubt the use of the Super Turbo Rubber (especially those who are always playing forged irons) but I think for the higher handicapper which this iron targets, the rubber works.  So if you haven’t been playing golf long or are stuck shooting in the 90’s and 100’s or simply need irons that can go very far very easily, then the 2010 ViQ is your calling. If you are an improving player who already is a decent ball striker and looking to add control to your game as you break into the 80’s and lower go read the X-Blade 703 review.

I’ve got the new ViQ Driver here as well and boy it looks…. interesting.  Before that though here are the rest of the new 2010 ViQ pics: