Today in part 2 of Tourspecgolf’s best clubs of 2011 I’ll quickly take a look at what was hot when it comes to irons.  As I had mentioned in part 1, Tourspecgolf probably sells the widest range of equipment of any store and that goes for even top Japanese based local outfits.  With many top end premium boutique brands, to famous mainstream brands to smaller budget brands, there is something for every playing level and budget.  Many demanding golf enthusiasts shop here and what they buy is very reflective of what is not only the most popular but also what is top performing. We should always keep in mind though,  not every club is for every golfer.  We are all different in swing styles and handicaps and finding the right fit doesn’t always mean simply buying what is most popular. Its about finding the right fit for each individual. That said, the top irons of 2011 did indeed belong to more mainstream brands.

For the latter half of 2010 and for the most part of 2011 leading up to the winter season, the Titleist VG3 Forged iron dominated demand and sales. Premium forged and with a similar size to the AP2, the VG3 provided even more ease of use and more distance all with better feel.  Demand was high all through the VG3’s model lifespan and Titleist Japan was constantly back ordered. Even I got on for the ride and gamed the VG3 Forged for nearly a full year (this is amazing for me considering I can access any iron at any time). It still is one of my favorite irons and you can find quite a few posts I made on the blog about them. Its all around performance, good looks and size were a big draw for players of all levels. Truly an iron that is forgiving enough for the average golfer but with enough performance and feel to suit the better player. Sadly Titleist suddenly discontinued the VG3 forged in December even though there was still demand for this wonderful iron. It really makes us wonder what they have in store as its replacement.

Towards the end of 2011 as the VG3 was rapidly approaching a 2 year model reign, many customers began taking interest in the new 2011 ONOFF Forged. The ONOFF Forged is very much like the VG3 Forged, in that it is an all around performer that appeals to a wide range of golfers who especially want a soft feeling iron like the Endo forged S20C ONOFF. I personally made the change from the VG3 to the ONOFF and the ONOFF picked up right where the VG3 left off, great distance, accuracy and even better feel. The ONOFF while appealing to many, had a new challenger as well come November of 2011. 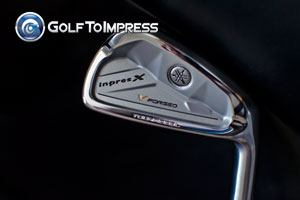 Yamaha introduced its all new 2012 lineup and again included a limited edition V Forged Tour Model Iron. Yamaha has had a tour model since 2008 and every year it has sold out even before launch, and this year was no different. As I noted in my review late last year, this generation of the V Forged Tour Model may be the best looking and best overall performing yet. We were lucky enough to secure the most sets of the Tour Model that we ever have and customers who got them have all been very happy with the Yamaha. Looks, Endo S20C forgings and a new cross X milling face pattern which customers have said is producing as much spin as non conforming grooves have been big news. Moving over 16 sets in just a couple of weeks made the Yamaha the strongest selling iron towards the end of the year.  With it already sold out, many are now going back to considering the ONOFF forged and the standard V Forged iron which is also very good.

Later this week I will take a look at the best wedges, putters and shafts of 2011!