For those who demand the best, there is no shortage of premium boutique style brands that produce top of the line drivers when it comes to design, materials and performance. From Epon to Crazy, and Kamui, and Baldo and most recently the new king of them all Ryoma, there are plenty to throw our money at.  They all boast intricate designs, meticulous workmanship and most of all unparalleled performance when it comes to feel, ease of use and distance. We recently added Romaro Sports to our stable of high end brands and so far they have not disappointed. I have already briefly looked at their forged irons and wedges which were very impressive as well as their wonderful Titanium Ray UT. I just finished spending a week with their all new 460cc Ray 460HX Black and 460HX Gold drivers and I have to say, Ryoma has a challenge on its hands. 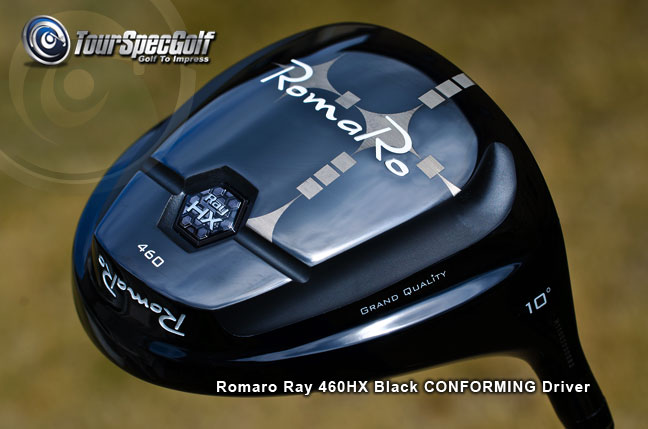 Looks wise, the Romaro Ray 460HX models blow the Ryoma out of the water (at least in my opinion). Smooth black IP finish, clean lines and very nice aesthetics with simple but stylish graphics provide a very premium look. Much better in my opinion than the D-1 you find on the sole of the Ryoma.  Romaro prides itself in quality and finish which is why on the 460HX Black they even stamp the words GRAND QUALiTY near the heel.  I really like the way the drivers look. As the title and images suggest, there are two models. A Ray 460HX Black which is the conforming model and a Ray 460HX Gold which is a 0.88 Hi Cor Model. 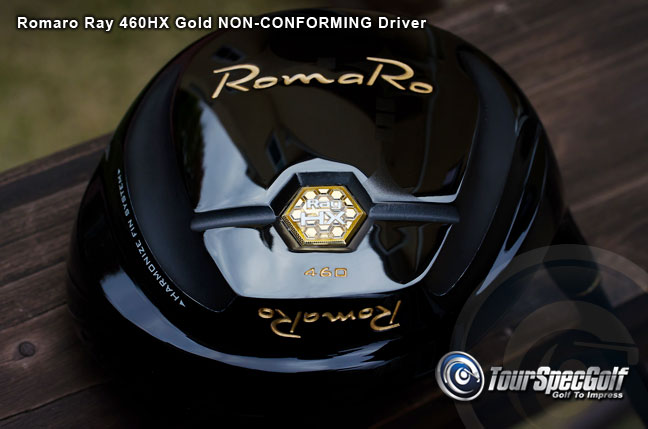 As you can see from the image of the 460HX Gold above, it looks pretty much like the 460HX Black save for the Gold Ray HX badge and gold paintfill. They share the same materials and design basis with the differences being, a higher spring effect or Hi COR face and more closed face angle as well as a slightly lighter head meant for longer club builds. So while they have distinguishing names in 460HX Black and 460HX Gold, they are in fact visually both Black heads with different accents. 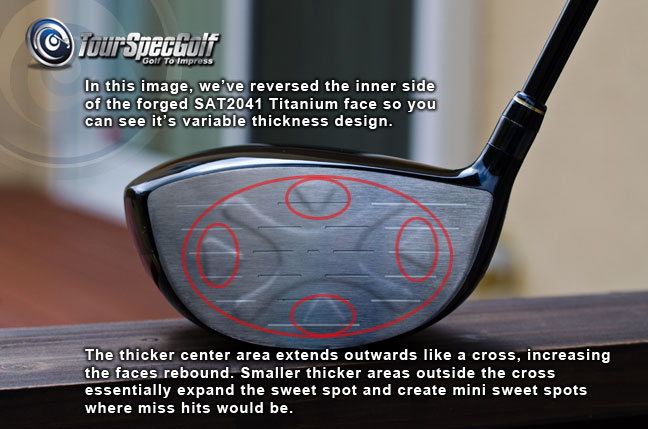 Both models utilize a beta titanium called SAT2041. The faces are forged and them chemically milled to produce variable thickness which expands the sweet area and minimizes distance loss on miss hits whether it be high or low or towards the toe or heel.  SAT2041 is reasonably rigid which allows for thinner face areas without sacrificing strength and rebound.  This does not however reduce the feel in anyway. The SAT2041 is soft but crisp a feel we  all like in drivers like the Ryoma.  Speaking of Ryoma, one of the reasons why it is so popular is its massive levels of forgiveness. I am happy to say that the Romaro 460HX models feel just as forgiving as their faces are huge with huge sweet spots to match. 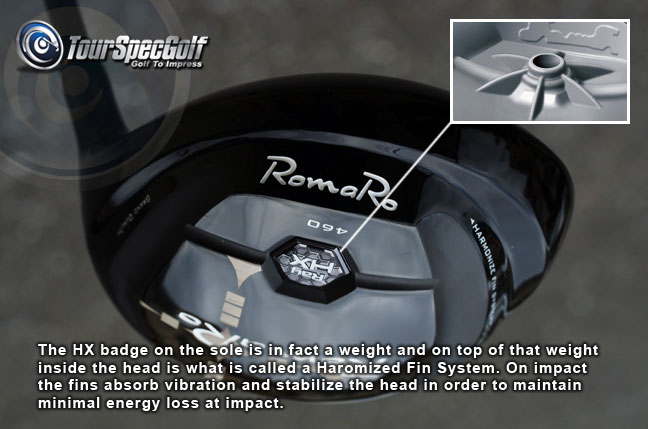 The Ray 460HX models use back weighting like the Ryoma but no where near the same weight nor is it placed as far back.  Because of its placment, the CG is not as low in the Romaro’s which actually create a lower spin flight and a stronger trajectory results in both optimal carry and run. The nice Ray HX badge you see on each head is in fact the back weight. On top of the back weight, Romaro designed what is called a Harmonized Fin System.  The fin system sits in the center of that groove you see crossing through the badge. That groove is called a power ridge which increases the rigidity of the bottom of the drivers face. The HFS system uses 6 fins in a circular design which help absorb vibrations and stabilize the head at impact for maximum energy transfer. 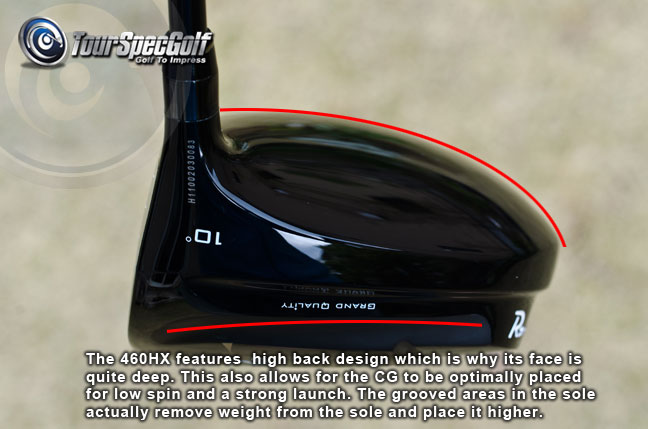 Unlike many distance and easy to use average golfer models today, the head is not flat and shallow. But rather deep faced and high back. Again this is a sign that the CG is not simply placed as low as possible. This driver launches strong and this has been a characteristic of all Romaro drivers. In tests that I have read and seen in Japan, many users and pro testers have noted, that Romaro drivers will not lose out to a head wind and are probably one of the strongest flying drivers out there. 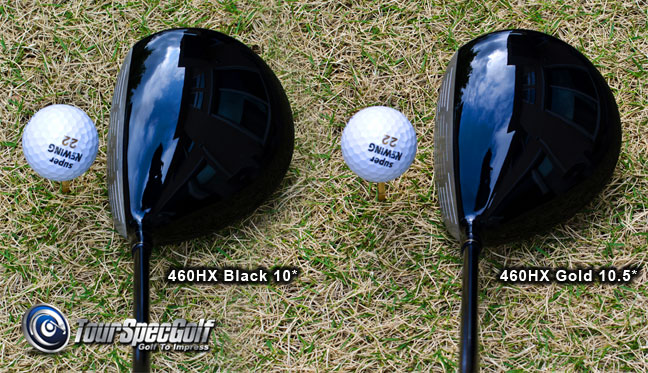 At address the Ray 460HX models are neither compact nor large. They are after all 460cc. I would say they look very comfortable at address. As you can see above, the 460HX Black 10* which is spec’ed as a square face angle pretty much looks that way. The 460HX Gold on the other hand is spec’ed as closed and it surely looks close to a 1* closed.  The closed face angle on the Gold is to compensate for the slightly longer club length it is intended to have (46.25″). The longer the club gets, the harder can be for an average golfer to square the face.  I hit both all week and the while I can pull shots, the slightly closed face of the 460HX Gold did not cause me many issues. It actually produce mostly soft draws which is a good thing. 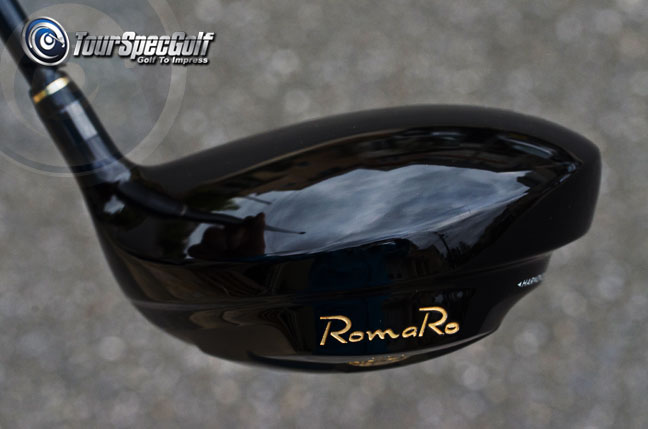 So the bottom line is how do these good looking heads perform. Lets say if this were a race, Ryoma, Epon, Crazy et al had better get use to seeing the back of the Romaro head as its a keeper. I firmly believe that Ryoma finally has a rival on its hands especially because the Ray 460HX also comes in a Non Conforming Hi Cor model. I had just shafted up my conforming Ryoma D-1 driver with Basileus Fiamma 50 R last week so I had the chance to hit it against both Ray 460HX heads which were sporting ordinary Romaro stock shafts.  The Ray460HX Black which again is conforming, matched the Ryoma in overall distance but provided a much more favorable trajectory at least one I liked more. Given the 460HX Black tester is 10* and my Ryoma 10.5* it will naturally launch lower especially since these high end brands are always true to spec. However as I noted above, the trajectory was very strong.  My Ryoma sometimes gets higher than I would like and runs less than I would like. The 460HX Black carried a touch less with its more penetrating trajectory but ran right up to similar spots as the Ryoma and sometimes even a tad more (reminder this is with the stock shaft). 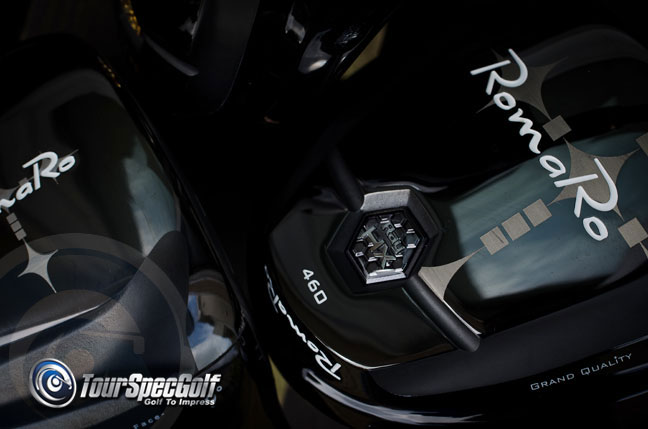 The Ray 460HX Gold on the other hand carried at least as far as the Ryoma if not more, and ran more out distancing the Ryoma by about 10 yards. What this means is the Romaro Ray 460HX Gold is already a challenger to the yet to be released Ryoma Special Tuning Hi Cor head (if it ever comes out).  Forgiveness is very good as I miss towards the toe and shots were traveling straight or with a slight draw and still going pretty much just as far. I am planning on getting a 460HX Gold and building it with a Crazy Royal Decoration shaft at 46″ as my new gamer.  The heads are now available but we are finalizing specs and options (ie head weight, face angles -I hope so) with Romaro so you should be seeing the Ray 460HX Black and Gold in the shop in the next few days.  They will be available as heads only, or custom made with any shaft available in Japan.  I think this will look pretty good in my bag, what about yours?