in Cars, Japan, Out of Bounds, STi
430
VIEWS
Share on FacebookShare on TwitterShare via Whatsapp

It’s been so busy lately with work and my brother’s visit, that I haven’t had the chance to get going on my new project which is Project JDM STi.  Project JDM STi is based on a 2011 Japan model WRX STi. In Japan they dropped the Impreza tag a few years back to differentiate their uber sports car line from their more budget car line. Hence now the cars are referred to only as WRX STi or even just STi.  I know there are several car enthusiasts on the forum and blog, and many golfer can appreciate nice cars as well. 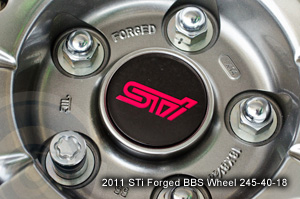 In the late 1980s, Subaru created the Subaru Tecnica International (STi) division to coordinate development for the FIA World Rally Championship and other motorsports activities. After the company had grown, the division was used to create high-performance consumer versions of the Subaru Impreza WRX, an all-wheel drive car with a turbocharged boxer engine, leading to the development of the Impreza WRX STi. The Subaru World Rally Team has used a race-prepared version of the WRX STI as its rally platform since the model trim’s creation. 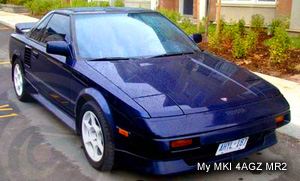 The all wheel drive turbocharged WRX STi has long been a dream car of mine. Back in university and my twenties, all the cars I owned featured forced induction, either a turbocharger or supercharger, with my favorite being the mid engine  white MKII MR2 Turbo (SW20) which I heavily modified.  The most fun car I had was the 1988 blue MKI MR2 Supercharger (4AGZ) which handled like a little go cart. As I got older and needed a more practical car, I switched to the Audi A4 1.8T Quattro which was my first all wheel drive car with forced induction. The A4 was fantastic in the Canadian winters but alas the engine was not up to par performance wise and I could not afford an Audi S4 or RS4.

As most of you know I moved to Japan with my wife who is Japanese about 3 and a half years ago. At that time the priority for us was settling into a new life here and purchasing a house. Even though I was now in the land of extreme car tuning I ended up having a Nissan Cube and most recently a Subaru R2. I loved the R2 as did my wife, its a little kei car with 66hp and amazing for driving around the narrow and tight roads in Japan. Superb on gas and easy as hell to park.  In the end though it was simply too small and too weak which we noticed when driving visitors from out of town or any type of long distance trip. The logical choice for us was the WRX STi especially since it was a car my wife has always loved (that and the RX-7) so having the wife approve was luckily not a problem. I was finally able to get one of my dream cars which I have been saving up for years for. 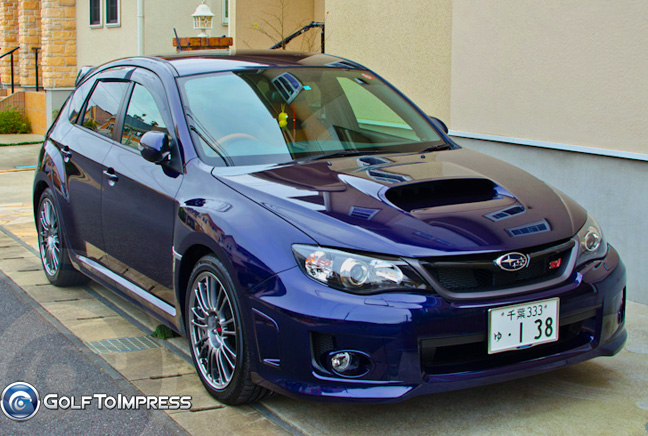 We decided on a Plasma Blue Silica 5 door hatch since having a dog and lugging around golf gear would be more practical with a wagon style, though we both loved the new sedan. One sad compromise I had to make being a one car family and having a wife who I love very much but unfortunately cannot drive a manual transmission car if her life depended on it (god knows I’ve tried teaching her on all my other cars), was to go for the automatic GRF model. Unlike the rest of the world, Japan gets two engine variants of the WRX STi. A 2.0 liter 308 PS (227 kW; 304 bhp) EJ207 engine with a Twin scroll turbocharger called the GRB, or a 2.5 liter 300 PS (221 kW; 296 bhp) EJ257 engine with a single-scroll VF48 turbocharger called the GRF. The much desired Twin Scroll Turbo is found in the GRB model which has a 6 speed manual transmission which my wife cannot drive but I so desired. So GRF or A-Line as they call it here it was. I can’t complain really as with narrow roads and speed restrictions and terrible road conditions in the countryside, I may never have had a need for a 6th gear and driving the the A-Line which features “Downshifting Blipping Control” and steering wheel-mounted paddles is actually quite fun. 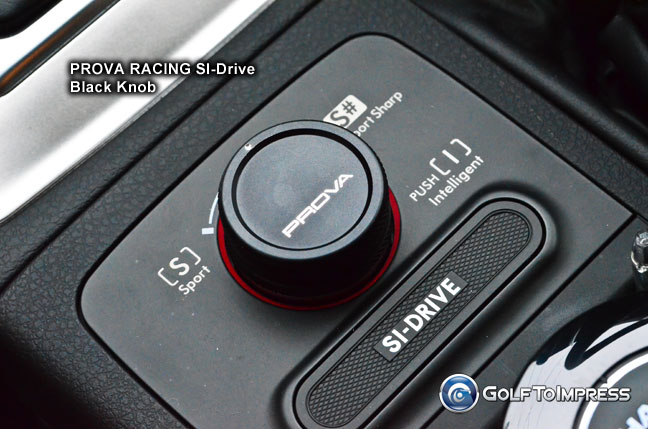 I finally got around today to doing a little modding on the car. Basic stuff really before I get into the internals. The first thing I did was replace the chrome SI-Drive knob with a Prova racing dial. I had actually gotten the dial before the car even and it was something I had planned on doing right away. I looks far more stealth and much less shiney than the chrome dial. Some of you who don’t know Subaru may wonder what SI-Drive is. SI-DRIVE’s purpose is to maximize engine performance, control, and efficiency.  SI-DRIVE has the effect of giving a vehicle three different engines in one. The modes are selected by a knob located behind the shifter, and they’re marked [I] Intelligent, [S] Sport, and [S#] Sport Sharp. The selected mode is shown in the multifunction display window in the instrument panel along with a representation of the corresponding torque curve. Choosing a mode sends signals to the vehicle’s body control module. From there, wiring carries signals almost instantaneously to the engine’s and automatic transmission’s electronic control units. The SI-DRIVE settings change the control units’ programming (mapping). This programming changes modify engine torque characteristics by adjusting how engine and transmission components function. These components include the electronic throttle, fuel delivery system, ignition, turbocharger wastegate, and automatic transmission response. SI-DRIVE modes deliver three distinct types of driving:

Intelligent: With its moderate power delivery and smooth drivability, this mode is ideal for around-town driving and for difficult driving conditions such as slick roads or loose surfaces. It is the most fuel-efficient of the three modes.

Sport: This mode is versatile, providing linear acceleration that is as ideal for freeways and suburban streets as it is for climbing mountain roads.

Sport Sharp: Delivering maximum driving enjoyment, this mode is ideal for tackling twisting roads and for confidently merging or overtaking other vehicles on the highway. In other words, more boost, more aggressive driving. 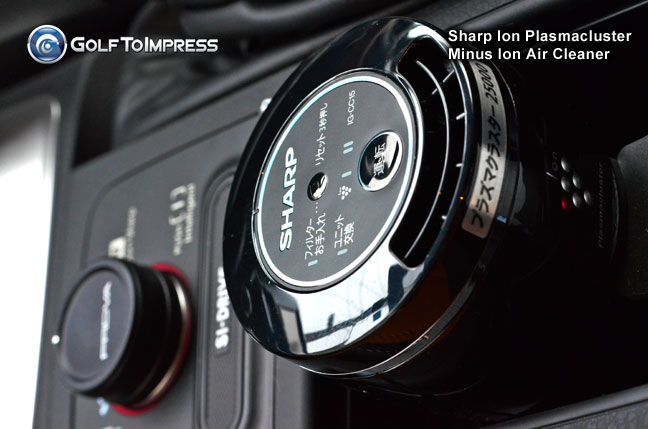 The second mod I did today was to install a Sharp Plasmacluster minus ion air cleaner. Cars get dusty and smells from dogs or food or even wet floor mats are unwanted. The STi happens to have two 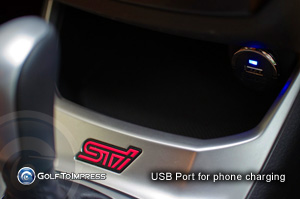 cupholders in the center console as well as on the sides of the driver and front passenger. So I decided to put a Plasmacluster in the first cup holder behind the SI-Drive to keep the air fresh and clean and for those relaxing minus ions. I did not want wires running around the car so I drilled a little hole at the the bottom of the cup holder and routed the power wire to the back cigarette lighter which is concealed in a storage box. I can easily unplug the unit if we happen to have 4 drinks up front.  Since neither of us smoke, I decided to turn the front cigarette lighter into a USB port for charging my smart phone or iPad. There is a perfect little padded cubby hole there too for placing my phone.

It was getting dark so I decided to finish off the afternoon modding session with a couple of light replacements. Strangely many new cars still use incandescent style bulbs. Here in Japan LED everything is all the rage. 3 to 6 times brighter and 2 to 3 times less energy used.  I decided to change the front turn signal bulbs and the front corner position bulbs. The ugly big orange signal bulb is not very bright and the very little position bulb puts of a weak yellowish glow. 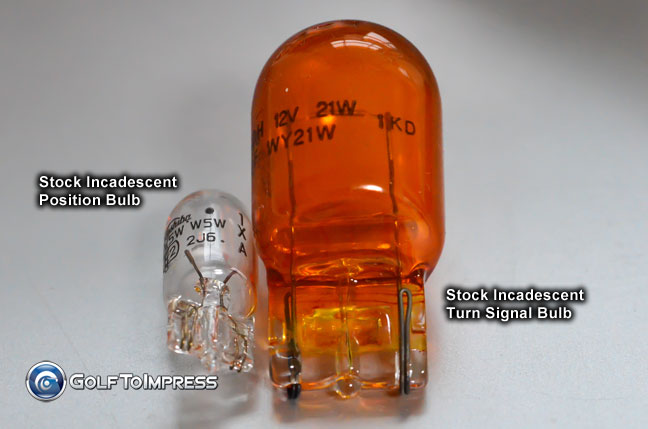 I picked up PIAA’s new Tera Evolution turn signal LED and a set of Philips Ultinon 6700k T10 position LEDs.  The turn signal LED are a bit more tricky to install because they draw much less power or current from the flasher unit (less than half the power of the original bulb) so the unit compensates by flashing the signal 2 to 3 as fast to make up for the less current. Nobody wants their signal lights flashing twice as fast so I had to install a parallel resistor to the circuit in order to trick the unit into flashing at the right speed.

The position bulb does not flash so it was a straight forward install.  Amazingly the 6700k position LED’s produce s whiter light than even the HID projector lights on the car thanks to their higher rated Kelvin temperature.  It is also considerably more noticeable than the previous incandescent bulbs it replaced.  Here is a shot straight on during the day. 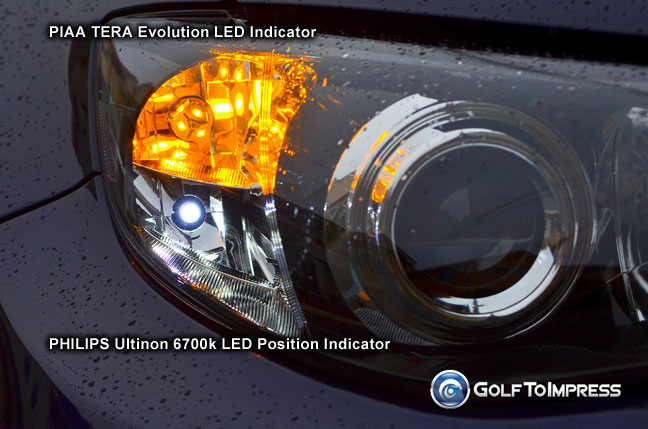 I quickly rinsed off the car which does feature a Three Bond Glass coating and snapped a few pics before I ended my first mod session with the car.  Little mods can go a long way! This weekend for part 2 I’ll be installing a Defi boost gauge as well as daytime running PIAA blue LED lights. In Japan cars are not required to have daytime running lights which I cannot understand as I think it makes cars far more visible and less prone to accidents. Even on dark rainy and stormy days, many cars on the road here have no lights on and cannot be seen clearly. I will change that on my STi plus it should look cool, and thats a big factor too. (^_^)