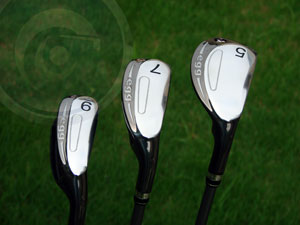 PRGR is about to launch the new EGG II hybrid iron set in Japan at the end of August. We got a set last week to check out and here’s my review. The original EGG was a favorite of many average and senior golfers in Japan looking for distance and forgiveness in a very very easy to hit package. The EGG iron was essentially a complete set of over-sized hybrids all the way down to the wedges. The scooped out cavity and wide sole made every iron easy to hit. The shaft lengths featured a 38.5″ 5 iron with a 23* loft which meant added distance overall. The first generation EGG though was not without its flaws. 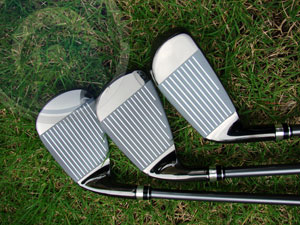 PRGR went back to the drawing board for the EGG II and took the best features of the original EGG and improved on its overall design and performance. When I first took out the EGG II, the first thing I noticed compared to the previous generation was that the irons seemed more stubby from toe to heel in the longer irons. The sole of the longer irons resemble traditional hybrids much more  now, wide and deep center of gravity making it very easy to hit in any lie and to get the ball up in the air.  As you can see in the first two pictures on the right, the sole gets progressively narrower and the face deeper as the irons get shorter. While the long irons resemble hybrids, the short irons look much more like traditional irons. This is a good thing as we all want easy long irons to hit but turn our focus to more accuracy with the shorter irons.

The scooped out back is much more prominent on the long irons and this is to push CG much further back to help you get the launch you need for distance.  With accuracy the key, the short EGG II irons do not have as deep a CG in order to provide a more stable trajectory. PRGR also worked on the weighting and coupled with the change in the overall shape of the iron by decreasing its heel to toe length and increasing its sole width creates a much easier to hit and hit straight model than the previous EGG. The previous generation EGG had a very long face which sometimes cause the player to go right with the ball. I found the the new EGG II much easier to hit straight and draw lightly. Its almost as if the smaller face area makes it easier to hit the center. 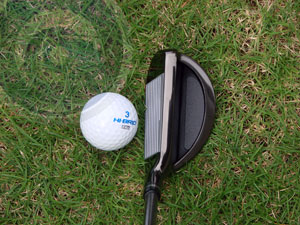 As an average golfer I can say these are very easy to hit. The feel has changed slightly from the original EGG which had a bit of a deadened feel to it. The EGG II is more lively thanks to its custom 450 Maraging steel material. Maraging steel is a very popular choice in irons these days. It is stronger than forged and stainless steel so can be made very thin. This creates feel and a very hot face. The difference here is that while most manufacturers use Maraging steel on the face, the entire EGG II is made of high strength Maraging steel. The 5 iron launches high for maximum carry and it gives very good distance with its longer shaft and deep CG and tunsgen weight in the sole.  It is very easy to square up and hit straight. The stronger loft and longer length of the EGG II 5 iron out hit my GN502 5 iron by an average of 10-15 yards! 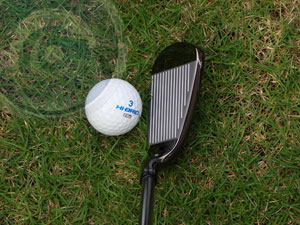 The short irons look and feel much more like traditional irons with a bit if a pop at impact. At address you don’t see any cavity which is a good thing as you can focus on attacking the pin without being distracted by an overly large head.  The EGG II does have offset to help the player square the head. I am not a fan of overly large goose necks but with the subtle black PVD finish, any offset is almost not noticeable. The sole design of all the EGG II irons feature a blunt leading edge. This really helps prevent digging as the sole will deflect and glide over the turf.

I am a fan of lightweight irons. We slower swinger befit tremendously from less weight both when it comes to creating club head speed and forgiveness. I can swing the EGG II very freely and strike the ball very well because of its lighter weight and overall head design. The new EGG shaft is in the 50g range and features a HIGH kickpoint. The high kick point prevents the iron from ballooning and is a perfect match with the high launch design of the head. So what was considered Japan’s best hybrid iron set just got better. If you are looking for the ultimate in easy irons to hit, the EGG II is your choice.

Look for the PRGR  EGG II to be added to the pro shop later this week.