PGA Championship Round 2 Scores Not Dropping 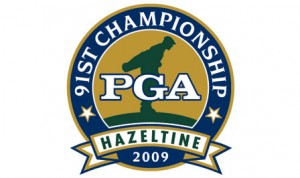 Round 2 is off and running and a great deal of golfers are already sitting in the clubhouse, watching the remaining leaders from Round 1 just get started.  If you step back and take a peek at the leaderboard you’ll notice something immediately:  Scores today are not that good, not that good at all.  The simple fact that yesterday’s leaders are still in the lead today, despite the fact that they were last to tee-off, are only on hole 2, and the majority of the other golfers have already finished their round should tell you something.

That’s right, Padraig Harrington and Tiger Woods, despite only just starting their rounds, are still in the lead by a stroke today.  Round 2 has barely started for them, but the not-too-impressive scoring of their competitors today means the lead is 100% theirs to lose from hole 2, to hole 18.  Just how bad has scoring been?  Try this on for size:

“Of the players who are already in, only two of them — Ernie Els and Tim Clark — have managed to break 70…Els carded a 68, making five birdies and just one bogey on the par-4 finishing hole. Clark did the same, though Els is in better position at 1 under overall and Clark even par through the first 36 holes”

Phil In Danger of Missing Cut

Yikes.  Speaking of trouble, Phil Mickelson looks like he’ll have have to keep his fingers crossed as tightly as they can possibly be crossed to even make the cut and advance to Round 3 tomorrow.  Currently, the cut line is sitting right at +3 and after back-to-back 74’s to start his PGA Championship, Phil is a stroke behind that line.  It is completely understandable that he would be struggling, after taking so much time off and with so much on his mind, no one would have ever expected his head to be entirely on the PGA Tour.

Nevertheless, it’s the best time to tune in right now, a great deal of golfers are already done and Tiger and Padraig are just heating up.  What this translates for us, is more time following their group, less following the groups we are not quite as interested in.  Can’t beat that, now can you?