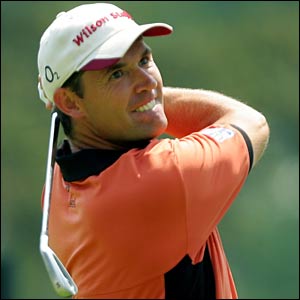 What a rollercoaster the leaderboard has been at the Bridgestone Invitational so far!  Those we expected to perform amazingly, haven’t, those we didn’t really predict having a ground tournament, are, and the leaderboard has been changing and revolving since the first tee shot yesterday.  Now, we’re seeing Padraig Harrington making a big push for a wide berth at the top spot, we’re seeing Tiger Woods once again struggle a bit, and we’re seeing yesterday’s stand-out Prayad Marksaeng is just getting going but picking up where he left off.

That’s right, Padraig Harrington is doing his best to show each and every golfer in the Bridgestone Invitational that he means business.  After shooting a first round 64, he’s through 15 holes today in Round 2 and while he’s only at -1 for the day, he has pushed it to a one-stroke lead over Scott Verplank, who sits right behind him at -6 and is also through 15 holes.  Meanwhile, yesterday’s ‘out of nowhere’ stand-out Prayad Marksaeng is only on his second hole of his second round but is looking to add to a first round 66.  He’s already -1 through his first two holes and looks to make another push for the top.

That still leaves the question:  Where is Tiger Woods?  Once again making things difficult for himself, Tiger started out yesterday decently enough, posting a first round 68, has followed it up so far with a +1, and while he’s only through 14 holes, the simple fact that he’s still six full strokes back with only two rounds left to play is a bit, well, concerning.  Nevertheless, you can never, ever count Tiger Woods out and we wouldn’t put it anywhere out of reach for him still.

The bottom line, as always with these great PGA Tournaments is this:  TUNE IN! The time is now to watch all of the action, the drama, the upsets and the triumphs.  Tune in, enjoy.

Golf Clubs Made by Kyoei