ONOFF has always prided itself in creating well designed golf clubs that not only look good but make golf easier and more fun. The Fairway Wings has been their utility model over the last half decade and while in the past there was only one Wings model, for 2012 there are two. In 2011, in addition to its standard Fairway Wings model, we saw ONOFF release a limited edition Pro Spec Fairway Wings which was the choice utility of top ONOFF Pro Shingo Katayama. The club was a hit for not only better players but players of all levels. Because of this, 2012 now sees a Type-D or Red Fairway Wings model made for the average golfer as well as the new Type-S or Black Fairway Wings made for the better and athlete golfer. I was very excited to test these two new demos as over the last 4 years I have always at one time or another had at least one ONOFF Fairway Wings in my bag. 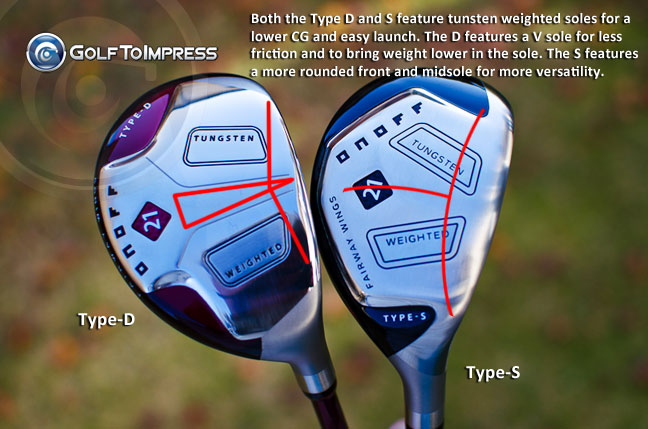 At first glance, the new Type-D and Type-S are not all that different from one another. A quick look at the specs show their head volumes are in fact very similar (the 21* D or Red is 120cc and the 21* S or Black is 122cc). Both feature multi level soles to minimize friction and increase versatility in various lies and both feature tungsten weighting to control CG placement, spin and trajectory. The Type-D Red has a V sole to help the average golfer from loosing too much speed at impact when the sole hits the ground. The V sole also brings the CG a tad lower for a easy strong launch.  The Type-S Black sole is rounded which increases its versatility in deep rough and uneven lies, maintaining stability and control.

Both Type-D and Type-S feature variable thickness faces for better feel, more forgiveness and higher ball speeds at impact.  What many will like about both models is that they are not very shallow faced like many modern clubs are these days. Lots of clubs are shallow in order to push the CG as low as possible and to make it easy to pick the ball off the fairway right in the center of the face but aren’t always friendly for use off the tee. The Type-S Black is a tad deeper than the Type-D Red but both excel off the tee for longer par 3’s or if you just need to be straight and in the fairway. The feel of both faces is quite crisp but soft, with the Type-S Black being a tad softer due to a thicker center and thicker face areas above and below the sweet spot. The Type-D Red is thick in the middle as well but the walls surrounding the sweet spot are thinner for more spring action benefiting the average swing speed player and golfer. 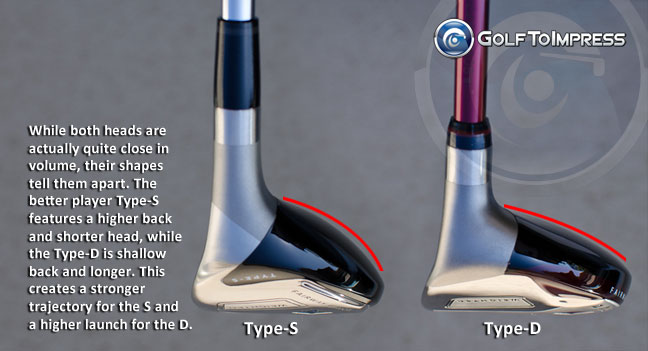 As I mentioned earlier, both head sizes are very similar in volume and the face depth is also very similar? So whats different besides the sole shape, face thickness and aesthetics? If you look at the clubs from the heel you can see that the while both taper to a shallower crown, the Type-S Black is shorter and more tall through the crown while the Type-D Red is flatter and overall shallower.  The shape of their heads alters the CG length and position with the Type-D producing a strong mid trajectory ball which is very stable and controlled for the better player and faster swinger thanks to its shorter CG. The Type-D Red has a longer CG producing a strong but higher launch helping average golfers with more distance through a higher trajectory and more carry. 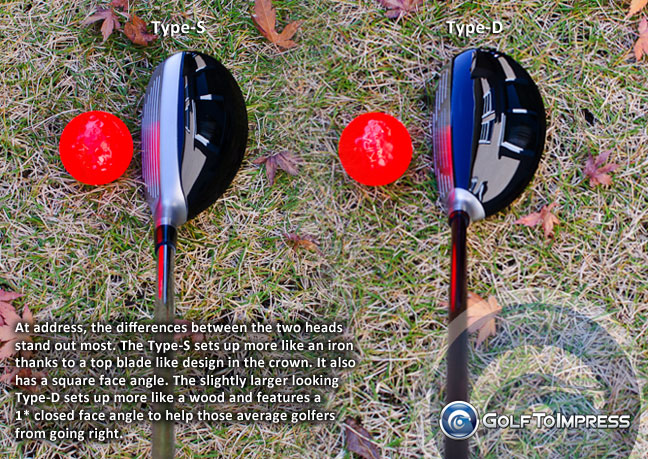 At address we continue to see more differences. Carried over from the Pro Spec model, the Type-S Black has an iron like look at setup due to the two tone crown. It’s longer ferrule and neck create more of a flow like an iron. The Type-S also features a 0* square face angle. The Type-D on the other hand sets up like a wood and features a 1.0* closed face on all lofts. Its hard to see the visual size difference but the the Type-S Red “appears” bigger due to its shallower crown.

It’s not uncommon for an average golfer like myself to rely heavily on a utility. When the woods are not going well and you still need that distance on a second shot, or in a tough lie,  the right utility can have you go from saving par to making double bogey. Because of this, when I look at a utility, first and foremost it has to be easy to hit. It is after all the “rescue” club in your bag. I am happy to report that both Red and Black models of the Fairway Arms are pretty easy to hit even with their deeper faces.  Their soles are versatile allowing for good contact resulting in great distance. Another factor in making good contact is the length of the club. Both the Type-D Red and Type-S Black do NOT have a loft where the club length is over 40.00″ and that is a good thing. The shorter length club allows for more control and consistency which in turn leads to better impact and more overall distance. I swung both clubs very confidently due to their length. For comparisons sake, my Royal Collection TRC 20* is 40.50″ in length and the ONOFF Type-D Red 21* is 39.00″, however I did not see much difference in distance as I was able to strike the ONOFF so well.  The ONOFF clubs also use maraging  faces but are a tad more high pitched at impact which I call crisp.  Maraging face feel is very good and you can easily tell when you pured it which is most of the time as the sweet spots are quite large. 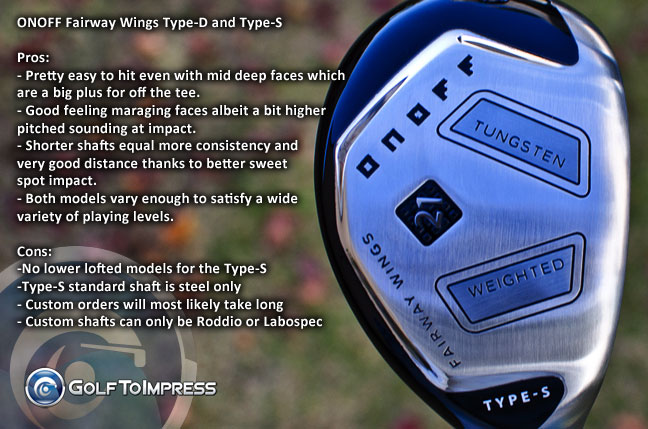 The Type-S Red is available in 18 21 24 and 27* lofts with ONOFF’s in house MP-512U graphite shaft. ONOFF’s graphite shafts are typically very good and considered in Japan a step up on most OEM shafts thanks to Daiwa’s expertise in carbon and graphite (see Roddio as well as Daiwa fishing rods).  Both the 24* and 27* are surprisingly useful and great for those average golfers who don’t get along with their long-mid irons. In a strong lofted iron set, they replace the 5 and 6 iron very admirably.

Interestingly the Type-S Black which is a Labospec model aimed at the better player comes only in 21* 24* and 27*. It would have been great to see an 18* as well here. The Type-S is offered with a steel shaft only in its stock form, either the 850GH Regular or 950GH Stiff. This is kind of too bad as I can see many players wanting the Type-S with a graphite shaft. The good news is it can be custom ordered with Labospec high modulus shafts or Roddio shafts though there will be a reasonably long wait on those.

I liked both models very much but as a player who uses his utility off the tee and sometimes battles a hook with shorter clubs, the Type-S was my choice of the two. I also like the way it sets up with the two tone crown. I could play both as they both are easy to hit and with good distance but the closed face would only help me if I sliced. I wish however the Type-S also came with a stock graphite shaft as not everyone will fit an iron shafted utility into their set.  For the average golfer who needs more distance, ease of use and battles the left side, the ONOFF Type-D Red is a premier choice. Look for the new ONOFF Fairway Wings to be in the pro shop in coming days!