Next Pairing on the Tee: Tiger Woods & President Obama

in Golf News, Golf Opinion, Out of Bounds, Rumors, Special Promotions
29
VIEWS
Share on FacebookShare on TwitterShare via Whatsapp 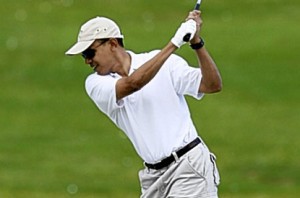 Talk about your all time dream pairings!  While I’m sure this rumored pairing has both people involved equally excited for the prospect, it’s got to be a little intimidating to both of them, for very different reasons.  That’s right, rumors are spreading like wildfire that President Barack Obama is planning a little golf round with none other than golf’s finest golfer, Tiger Woods.  Now step back and imagine the pressure on each person:  First, Tiger Woods is getting to golf with the President of the United States of America.  With that comes the Secret Service, the formalities, and then the issue as to whether or not you let him win.  Knowing Tiger, don’t count on that to happen.  Now, if you’re President Obama, there’s the pressure of having to tee off with arguably the best golfer the sport has ever known, or will ever know.

Secret Service On The Course

That’s right, rumors are spreading, Secret Service has been seen scoping out and patrolling the course and people are talking.  According to reports:

“…word here on the Vineyard is that the Secret Service has scoped out the oh-so-exclusive Vineyard Golf Club to prepare for a possible golf outing between President Obama and golf great Tiger Woods!”

No Official Confirmation Yet

While nothing has been officially confirmed by either Tiger Woods or the White House, it actually would make sense if this were to come true.  It fits snugly into Tiger Woods’ schedule as he’s not scheduled to take part in the Deutsche Bank Championship at TPC Norton until September 4th and President Obama is going to still be on holiday until August 30th.  Whether or not the two actually hook up for 18 holes we’ll have to wait and see, but what an exciting match-up if they do!

Obama has been practicing and reports put his handicap anywhere between 16 and 24.  Assuming he plays with Tiger, we’ll hope he takes the 24.  Nevertheless, this is one worth finding out more info on, and in the event they do play, I’m sure we will track down photos!