We all know that the Pro Gear’s egg Spoon is one of the best ever fairway woods to come out of Japan. Deadly forgiving with monster type distance, may flock to it for its amazing performance. However, it wasn’t perfect by any means. Many found the face and profile too shallow making it scary to tee off with. While stronger players found the club simply too light resulting in a lack of stability and topping of the ball in the fairway. 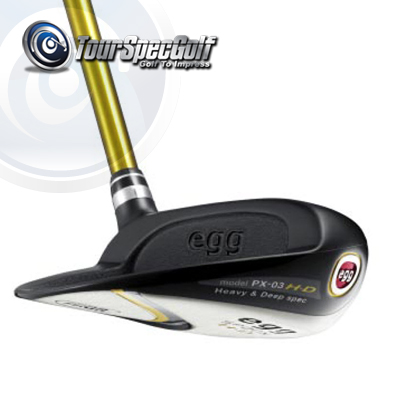 PRGR decided to address this issue by releasing a new egg Spoon HD – which stands for Heavy and Deep Spec.  With the deeper face comes an all new ES475 maraging steel material for higher strength and more ball repulsion at impact from higher swing speeds.  The deeper face and slightly more compact (158cc) hollow head has also allowed for realigned CG point for lower spin and a strong and penetrating trajectory. The ES475 features a variable thickness face with an outer wall of 1.8mm thin , a mid wall of 1.9mm thin and a center section of 2.2mm thin. Total face area has increased by 19%. PRGR claims the new deeper face and ES475 equal higher ball speeds and increased distance over the standard Spoon thanks to a COR rating of 0.81 which is unusually high for a Fairway wood and only bested by the Ryoma FW at 0.82.

The stock shaft for the Spoon HD has also been tweaked to be heavier and to use Vectran carbon fibers for added stability and performance.  Overall the new Spoon HD is 20 to 22g heavier than the current Spoon timpping in at 335g and D2.5 along with the stock M-46 shaft.  Fubuki FW F65 and F75 are also options with the F75 tipping the scales at a nice and heavy 339g which is certainly hefty for a 3W by Japan standards. PRGR has also decided to only release the HD in 14.5* for the better player.  We’ve already requested a demo to try and should have the club in the pro shop soon!