You can imagine how surprised I was when Epon contacted us to announced that they were releasing new premium tour level golf balls. Epon is of course best known for creating some of the most premium high performance forged golf clubs known to man and based on their track record of design and producing top notch products, my surprise turned to excitement.  Epon has released 2 models of golf balls, the Tour F3 and Tour F4. Both balls are premium tour quality balls which focus on maximum performance. Lets take a closer look at both models as well as a few first impressions. 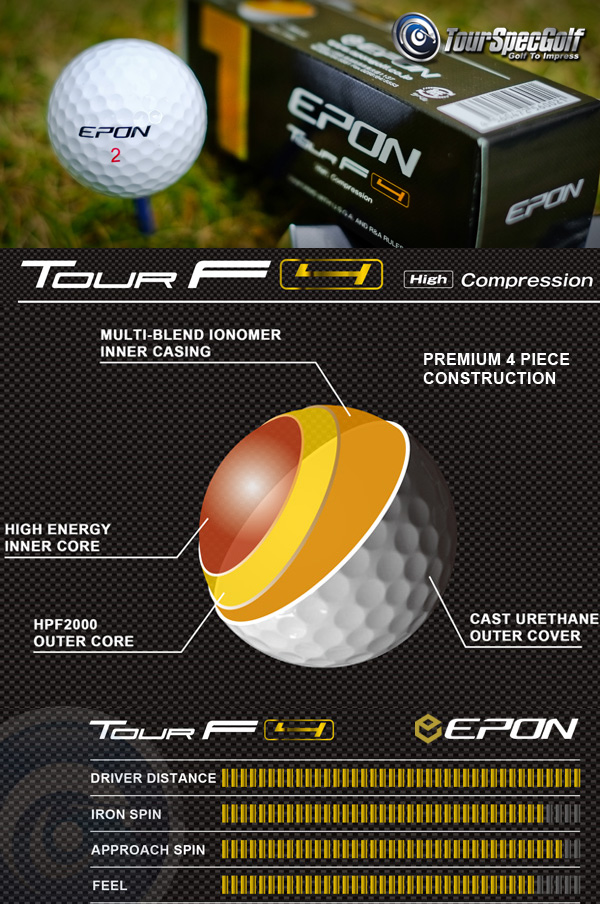 The Tour F4 is a high compression 4 piece premium ball that utilizes a dual core.  Dual cores are very popular in higher end balls that cater to stronger players who want the best of both worlds, low spin bit distance off the tee matched with high spin and touch around the greens. In the case of the F4, the high energy inner core is activated by higher swing speeds ie the driver off the tee which allow the core to suppress spin and and increase energy transfer for higher ball speeds off the driver face and less spin equaling more carry and run.  As you progress to shorter irons and less swing speed, the inner core goes untouched and the second outer core which is made of HPF2000 is designed to increase spin and add to touch. While the F4 is a high compression ball, the HPF2000 core itself is an iomomer polymer that actually posses a lower compression but higher COR.   This is what results in the soft touch around the greens matched with the multi-blend inner casing to provide more rotation.

In independent golf lab testing against other big name tour balls, the Tour F4 had more overall driver distance than other top competitors while at the same time out spinning the competitors with short irons and wedges. So far after a few days of testing, what has really stood out for me is feel. While rated a high compression ball, the feel of the F4 is very soft off of all clubs.  Because of this the touch around the greens is superb and spin control very impressive.  Feel is especially good with forged wedges (tested with my Endo forged Vokeys) and putters.  Off the tee, I don’t generate enough swing speed to take optimal advantage of this balls inner core but even so, its distance was right up there with my Super Newing and feel just as soft as the low compression Newing. In my short time with the ball so far, I have to say its got a lot of potential especially for the better player. 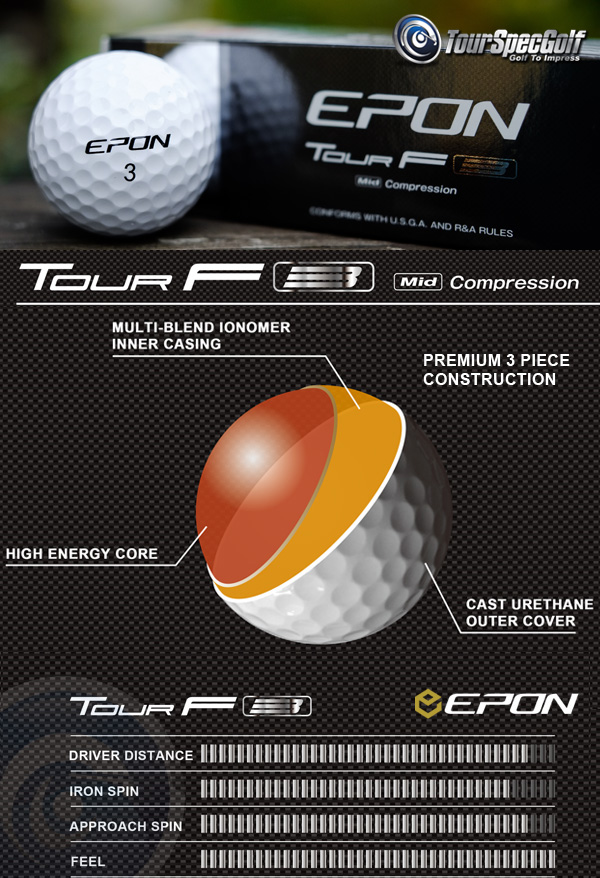 The Tour F3 is a mid compression 3 piece premium ball that is made for maximum feel and balanced all around performance. It utilizes a similar high energy core as the F4 but without the HPF2000 outer core.  The larger inner core is soft to produce more feel which is the focus of the F3.  The F3’s strengths are consistent ball flight and feel off all clubs and in the independent testing, while it was not the longest of the tee, it was right up there with the other big name brands but, out spun the other competitors during approach shots.  For me personally, both F3 and F4 played equally well around the greens and both are super soft. Both have the tendency to almost stick to the club face as you feel the ball compress and when you need more spin, more contact/friction with the ball and face of the iron/wedge is a good thing. I can’t decide yet which is better for me off the tee without more playing time.

The Epon Tour F3 and F4 balls have begun shipping and over the next few months we will certainly tell how good this ball is and can be especially as feedback comes in from the many enthusiasts on our boards.  If you want to play a tour like ball but want something softer, both the F3 and F4 are your calling.  Stronger players will benefit from the F4 and their ability to activate the inner core while average players who need balanced spin and distance may do well with the F3. One thing is for sure, Epon has transferred the soft from their clubs to their golf balls.

Be sure to check out our forum for feedback.

Get the balls from our pro shop!