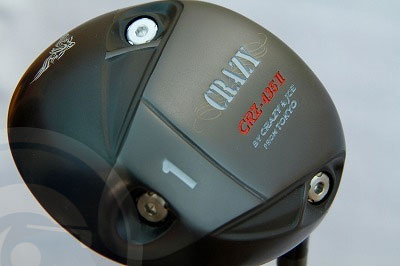 Crazy has officially announced their new CRZ-435II driver which will be released late August to early September. A joint design with JBeam and manufactured by JBeam for Crazy, the new 435II  becomes the new flagship driver for Crazy.  200 pieces will be available at launch and Crazy already expects them to be sold out.  While the face of the driver appears similar to the original model except it now has a black IP finish, the sole has change radically incorporating a 3 interchangeable weight design to allow for alteration of the head’s CG point and bias. The CRZ-435II has a traditional shape and the following specs:

The new CRZ-435II is once again touted as a low spin distance driver with great stability. Its predecessor the original CRZ-435 was  considered the longest driver in Japan in 2010 especially for the faster and harder swinger. Crazy believes the new 435II is a big improvement and we can’t wait to see if it truly is!

Apparently almost 75% of the initial 200 pieces of 435II heads have already been spoken for in Japan so if you would like to order a head, please contact us now to reserve.