Mizuno GX - A closer look at Mizuno's commitment to a wider range of players! 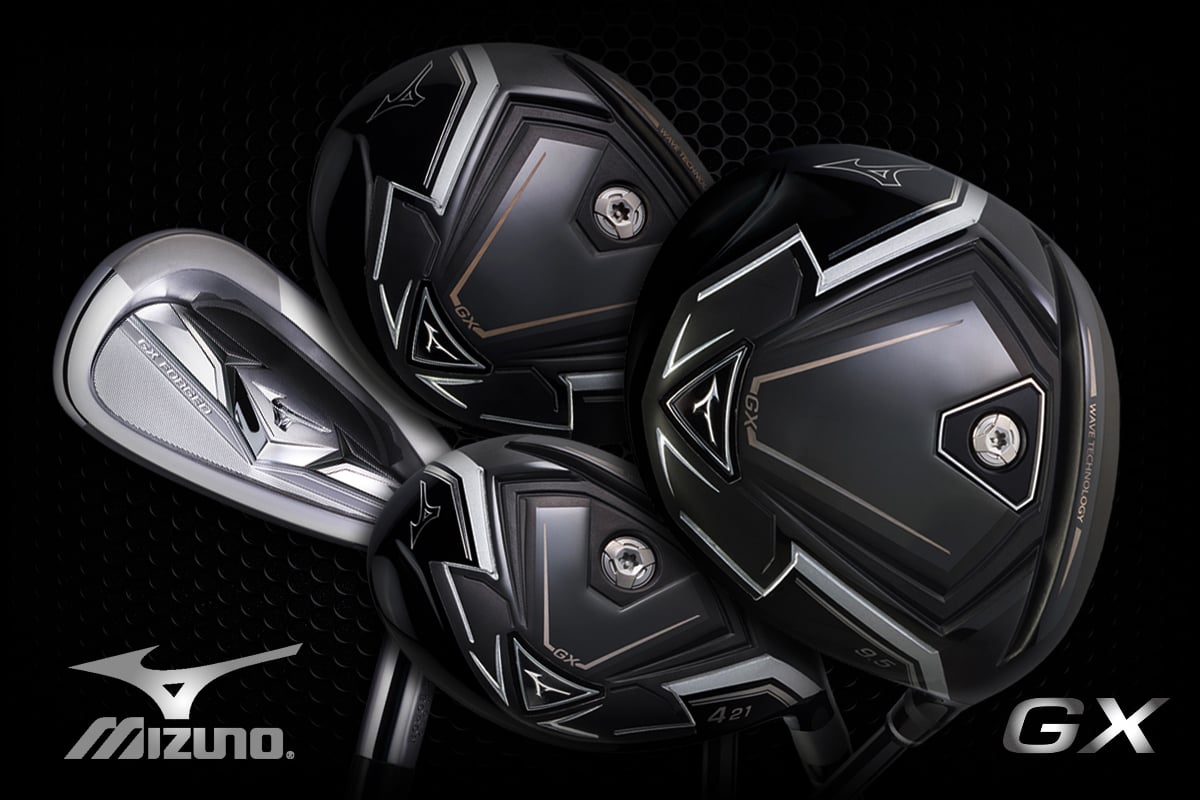 Introducing the 2018 Mizuno GX golf clubs !!     Early in 2017, Mizuno released the MP Type 1 and Type 2 drivers.  With the MP drivers,  Mizuno set out to challenge the global competition in the driver space.    “Taking distance performance to the limit” was the focus of their design.    While distance performance was in fact good,  they could not completely part with the  “players” club aspect being an “MP” driver.    To most players out in the market,  the MP range of clubs have an established reputation of being hardcore or reserved for better players.  As such, when your audience is limited to only a portion of the market,  you are not really challenging the global competitors.   The big boys like TM, Cally, Titleist and Ping have flagship products that target a wider audience including beginner players.

You might say Mizuno’s  JPX series have covered those players…   Umm… unfortunately I don’t think that is the case.   Anecdotally speaking, most of the JPX users I see out on the course are mid-handicappers or better.

JPX900 Driver, which was a good performing driver for a mid-handicapper, was by no means the most forgiving driver out there.  Then a full sized 460cc ST-180 driver came out.   Is this the global model that could in fact compete with the major US brands from a performance and forgiveness perspective?    Only time will tell.  Personally,  I would not use a blue colored driver but that’s just me.   Do you like blue?

Enter the 2018 GX series, Mizuno claims to have consolidated all existing innovation, craftsmanship and renown high quality manufacturing technology into a single range of clubs and they are going all out to capture the attention of a larger user base.      Looking at the GX clubs, it’s not hard to recognize that the design of each club can be intriguing for a wide range of players, beginners to die-hard Mizuno MP followers alike.  Mizuno is putting a big bet on this new line-up.   I think this is a product range that truly fits the need of the market.  Let me explain why!   Follow the jump for more…

First thing I noticed with the GX driver is that the profile is very shallow.  Possibly one of the most shallow shapes I have seen from Mizuno.   The one feature that I was pleasantly surprised with is that the hosel is NOT adjustable!!   Bonded hosels are becoming such a rare thing these days especially with drivers.   I think adjustable hosels are aesthetically distracting and, sorry to say, but make drivers look ugly.   The other thing that I really love about this head is that it has a beautiful gloss black crown with no ugly alignment aid or logo.   A very nice appeal to the traditionalist who just cannot tolerate drivers with “stuff” on the crown!!    Thank you, Mizuno!

The driver is packed with many performance enhancing features starting with their patented Coretech face design where they place a thicker section in the middle for stronger impact and very thin section in the perimeter to allow more face flex at impact.     Face material is my favorite SP700 titanium but they have their own proprietary name and call it  “Strong Forged Elite Titanium” which they claim is 10% stronger than your typical 6-4 Ti which allows the face to be made thinner while retaining the required rigidity.  Moving to the sole, the Wave Technology sole is well and alive.  It creates more flex to the face at impact compared to a flat sole.    From a forgiveness perspective,  the MP Type 2 already had a fairly large sweet spot but in the GX they were able to further expand that sweet spot by a whopping 17%!!    This will translate in slight off center hits still producing near optimal distances.  For the weight distribution, they utilized a dual weight system where they placed 6g internal weight at the very back end of the sole but also a 6g weight screw at the front.   The effect of this approach is that the back weight will help with easier launch while the front weight will keep the backspin performance in check.   Simple but highly effective.

With the Mizuno GX series golf clubs,  Mizuno is introducing the MFUSION graphite shafts as standard offerings. In case you haven’t noticed,  many of the Japanese shaft brands including the familiar JDM boutique brands have been releasing lighter but more stable/stiffer shafts in the last couple of years.  Mizuno MFUSION shafts follow this trend.   Traditionally, lighter shafts tended to be too soft and difficult to control which resulted in greater dispersion.    In order to solve this problem, Mizuno developed a new carbon fiber material that uses Carbon Nanotube technology.

We won’t go into the details of “Carbon Nanotubes” at the moment but MFUSION is an innovative manufacturing process to bond traditional carbon fiber material with carbon nanotube material.   With this innovative process, Mizuno was able to produce a light weight shaft ( 39g for R and 49g for S )  which is also significantly more stable and controllable.  GX driver comes in 9.5 deg and 10.5 deg lofts with MFUSION shaft as standard. 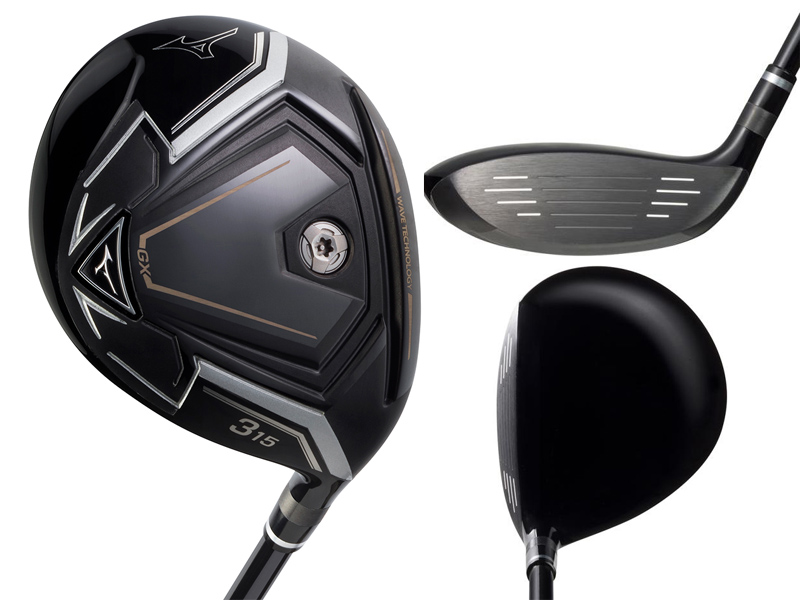 Similar to the driver,  Mizuno GX fairway woods adopt a shallow head profile to inspire confidence and to optimize forgiveness for a wide range of players.  Mizuno GX’s 180cc for the 3 wood actually sits midway between a Ryoma F3 at 205cc and Modart MA01F 3 wood at 155cc. The face is made of Forged High Strength Maraging Steel and the body is cast stainless steel.    You can expect good sound and feel from these fairway woods.    It’s actually hard to find a shallow fairway with just the right size.   My recollection of previous Mizuno fairways has been small and deep.  Together with the traditional but confidence-inspiring look at address,  these fairways will appeal to MP fans who seek additional forgiveness as well as beginner players who are looking for a set of clubs that they can keep and play for a long time.    The shallow profile is sure to boost confidence with your important second shots on a par 5 hole and the dual weight design will also help you hit shots with good height and optimal spin for maximum distance performance.     The GX fairway woods come in 3 (15deg), 5 (18deg) and 7 (21deg) with MFUSION shafts as standard. 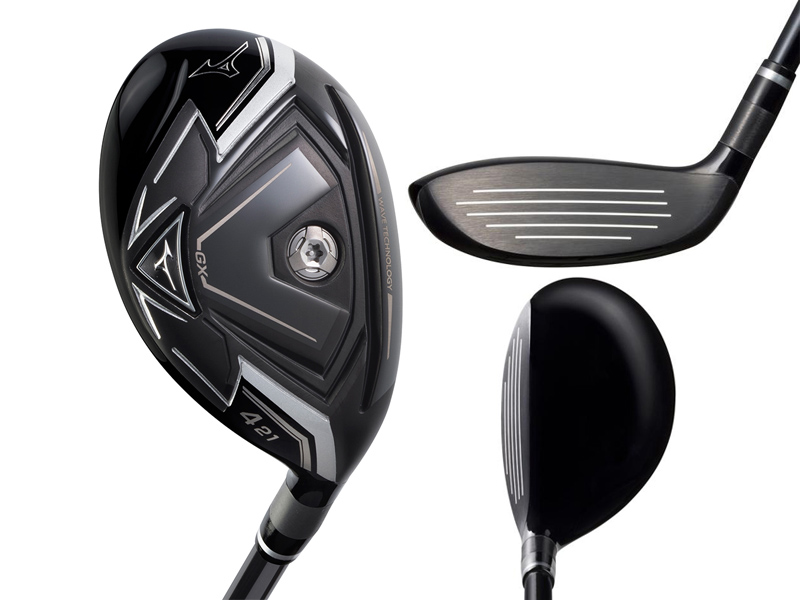 Continuing with the flow,  the Mizuno GX Hybrids feature a slightly shallow head profile.    With hybrids,  you really need a versatile club that you can rely on to deliver the shots that you envision from 180+ yards.    And then in times of trouble,  to be that trusty rescue club to get you out of the situation quickly and safely.  The GX Hybrid will provide just that.    Hybrids are one category where the shape of the head can vary significantly from one brand to another.    Some are so unique and unorthodox that looking at it takes getting used to.    No worries on these Mizuno GX Hybrids.   These GX Hybrids are shaped very traditionally so that literally anyone can get used to the shape on the first try.  There is a forgiveness factor that will welcome beginner golfers to give it a go.      A shallow profile combined with a forged maraging steel face,  the GX hybrid promises to deliver controlled high trajectory shots that easily stops on the green with just one hop.   You will start to look forward to longer approach shots.      GX Hybrids are offered in 3 (19 deg) , 4 (21 deg) , 5 (23 deg)and 6 (25 deg)  with MFUSION shaft as standard. 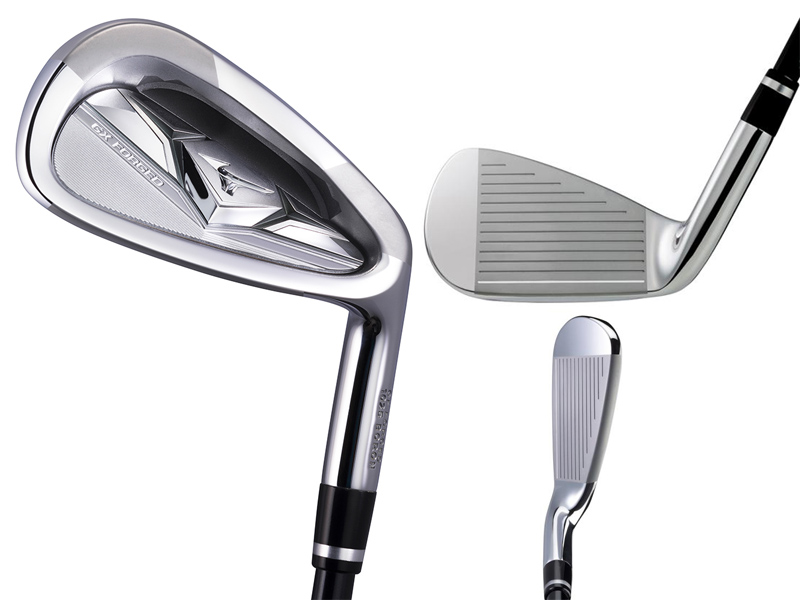 When you look at the lofts,  they are about 2 clubs stronger compared to their MP-66.   At approximately  84.5mm,  the length from toe to heel are the longest yet for a full forged Mizuno iron.    The undercut on the pocket cavity goes deeper and wider than its predecessor by using a new pocket called “Dual T Slot. ”   For the longer irons 6 & 7 ,  they also embedded a 10g tungsten weight low in the toe to help create a larger sweet spot.

They incorporate a forging technique to abruptly cool only the face which produces a harder face section  allowing them to make the face thinner and generate higher COR while maintaining the mild feel at impact signature to Mizuno Grain Flow forged Irons.

Highly forgiving,  improved distance performance,   signature Mizuno forged feel…   I’m not seeing any weaknesses to these irons.   If you are currently a Muscle Back player … sure these won’t look anything like them and you may not like the larger size or the slight offset of these irons.    But for many of you who seek consistency in their game but don’t like the feel of cast stainless steel Game Improvement irons out there,   look no further, Mizuno GX Forged irons are for you.   Standard shaft offerings are the MFUSION graphite shaft and Nippon 950GH HT steel shafts.

The GX Iron series also offer a 49 deg GW and a 55 deg SW as part of the series.   These wedges feature a full 1025 Boron Grain Flow Forged heads with lofts that match nicely with the rest of the irons.   There is also some  offset which transitions nicely from the ironset.   The wedges can be ordered individually or together with the irons.     MFUSION and NS 950GH HT are the two shaft offerings for these wedges as well.

I believe Mizuno has a very exciting and well thought out set of clubs with these new GX.  A wide range of users would sure to be happy with these clubs.    Mizuno GX clubs can now be ordered thru the TSG Proshop!   Follow the links for the product pages: