Today I’m going to introduce an exciting new product which really isn’t new. Since Bridgestone discontinued their Science Eye swing monitor which reads head speed and ball speed, we’ve been looking for a viable replacement. The Red Eyes Pocket from Pro Gear or PRGR as we know them has actually been out for quite some time.  It is a very cool Swing Speed monitor that is not only made for golf but also for baseball and soccer. When I had first asked PRGR about the REP (let’s use REP so I don’t need to keep typing out Red Eyes Pocket), he was unsure about whether or not the unit could do MPH, which for many golfers outside of Asia is a standard way of measuring head/swing speed and ball speed.  I secured a unit for myself to test and low and behold, the unit can indeed be changed to Miles Per Hour with a simple two button presses.  I’m going make a brief introduction of the REP today since I’ve gone over the instructions and begun translating them into English. I’ll be looking primarily at the Golf features of course though at the end of the post I’ll touch briefly on soccer and baseball capabilities. 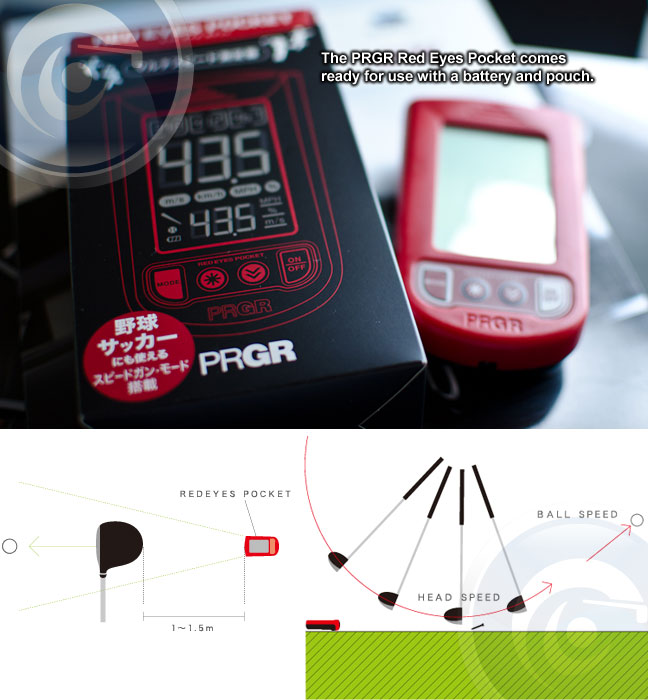 The PRGR Red Eyes Pocket is essentially a radar/speed gun with advanced functions. BEST OF ALL, it does not need any type of magnets like the Bridgestone Science Eye did.  The Science Eye required that a magnetic strip be stuck on each club in order to get a speed reading. The REP is a stand alone unit that functions alone. This is a huge bonus for customers considering the REP as there are no added costs of getting magnets (as magnets wore out you needed replacements as well with the Science Eye).  For golf all you have to do is place the REP unit, about 1 to 1.5 meters (3-4 feet) behind your driver flat on the ground in the tee box or at the driving range.  The head of the unit has a sensor which must not be obstructed meaning laying it in tall grass or on a hill is not recommended. The sensor has dual “eyes” meaning it can capture both head/swing speed and ball speed after impact. 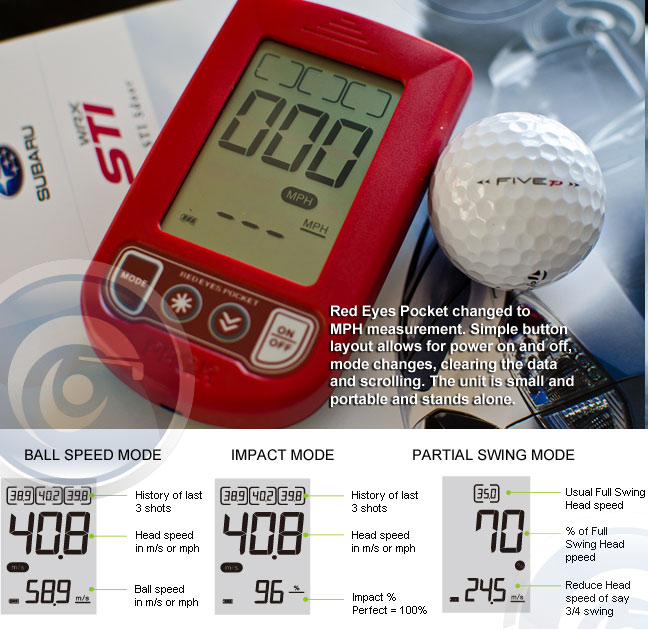 For golf usage, the PRGR Red Eyes Pocket pretty much has 3 modes.  A Ball Speed Mode, an Impact Mode and a Partial Swing Mode. The unit simply turns on and off by holding the ON/OFF button for a few seconds (to prevent accidental turn on and off). The unit will also power itself off after 10 minutes of idle time.  The Mode button allows you to switch between the three golf modes and with a simple press. A long press of the Mode button switches the unit between Sport modes, ie Baseball and Golf etc and the final long press switches the unit to MPH.  One of the cons of the REP is that it does not remember to stay in MPH mode. Everytime you turn it off and back on you will need to long press the Mode button a couple of times to get into MPH readings.

The graphic I made above pretty much says what the 3 golf modes do. The Ball Speed mode is self explanatory, you get your head/swing speed and your ball speeds. It keeps a history of the last 3 swings at the top.

The Impact mode calculates Impact accuracy very much like smash factor. It divides ball speeds by head speed and if you swing 100mph and have a ball speed of 150mph that equals 1.5 smash factor or in the case of the REP 100% impact. Of course with the first mode we can calculate this ourselves but why do it when the REP does it for you?

The final mode is the Partial Swing Mode. Say you are at 90 yards and you take a full swing, the unit records that as your usual full swing head speed. You then move up to about 65 yards and you take a partial swing with the same wedge and hit it close to the pin. The REP is able to tell you what your swing speed is on that partial swing and what percentage of your full swing it was. So like the image above, it recorded 24.5 m/s or a 70% swing compared to your full swing. For some people this might be like “uh okay” but how many of us know what percentage we are really swinging at on shots that are not full swing. The partial swing mode is to be used as a handy informational source to increase consistency on approaches.

I also threw a golf ball into the photo above so you can get an idea about the size of the unit.  Considering its functions its pretty pocketable… hence the term Red Eyes Pocket (it’s red, it has eyes/sensors and you can put it in your pocket) – typical oddball Japanese marketing and naming but it works. (^_^) 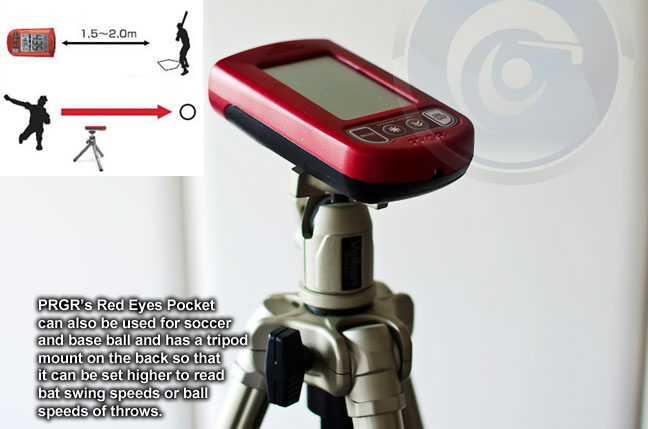 PRGR really wanted to make the REP more than just a golf tool so they gave the REP the ability to be a pitchers radar or bat speed radar for base ball as well as a ball speed radar for soccer. However using the REP for those sports would be difficult if the REP could only be placed on the ground. PRGR decided to insert a standard screw hole in the back of the unit that fits any camera tripod.  This allows it to be mounted off the ground and higher to properly read thrown base balls and kicked soccer balls as well as bat swings.

The PRGR Red Eyes Pocket comes with the unit itself, a little carry pouch and included 9V battery (I wish it were a rechargeable unit). It will go for around 180.00 + shipping.  I’m playing a round tomorrow and will test the unit’s actual functionality before adding it in the pro shop.  I’m especially curious to see how swing speed increases between different length drivers and how it affects the impact results.  If you have questions about the unit or really want one before then just send us an email as always.