Cussing Golf Pro’s: Part of the Game or Out Of Bounds?

in Golf News, Golf Opinion, Out of Bounds, PGA and Professional Tours, Rumors
24
VIEWS
Share on FacebookShare on TwitterShare via Whatsapp 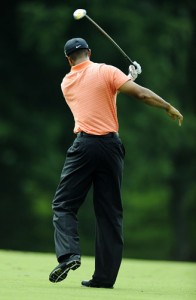 Here’s something that’s a bit out of the ordinary for this Wednesday, but was a question raised by golf.com amongst others.  Anyone that has ever played this amazing game of golf knows that while it can be the most rewarding sport on the planet, but a single shot later and you could be feeling like it’s the worst invention man has ever thought up.  When those “bad days” on the golf course happen, controlling your reactions to those poor shots can be nearly impossible.  Knowing this, whether or not golf pros should be able to vocally and verbally express their anger at the quality of their play is being debated, and it’s being debated because of the actions and behavior of golf’s most high profile golfer:  Tiger Woods.

If you tuned in at all to the British Open, you know exactly what we’re talking about.  How Tiger performed is no secret, but what the cameras did their best to hide, was his reactions to that play.  An errant drive led to him hitting his golf bag with his club.  A missed putt lead to him throwing the putter and dropping the “f” word; a bad shot from the fairway and you heard any number of profanities.  The question we’re left asking, and apparently golf.com agrees, is why in the world is the PGA and their cameras doing their best to hide these reactions?  I’m sorry, but the one thing I took home from the movie Happy Gilmore, is that if golf could use one thing, more than all other things, it’d be Passion.  Golf needs more fire, more excitement, more drama and yes, more REactions.  Golf needs every golfer to want to win so bad that one bad shot leads to a 5-iron soaring through the air.

We React, Why Can’t They?

If you think to the last time you played, the people you played with and the other golfers populating the course, you’d be hard pressed to find anyone Not reacting to their play.  It’s natural to want to play well, it’s natural to react when you don’t.  Why then are we expecting those with the most skill in the world to not react when they don’t display that skill?  I understand the need to censor the words being said, but why hide the emotions themselves?

Our advice:  Let golfers be human too.  The PGA Tour needs an infusion of emotion, passion and fire.  Stop worrying about the reactions, stop filtering the drama and let golf be even greater.