Burner TP Iron and Shinobu Moromizato: Image and Video of the Day 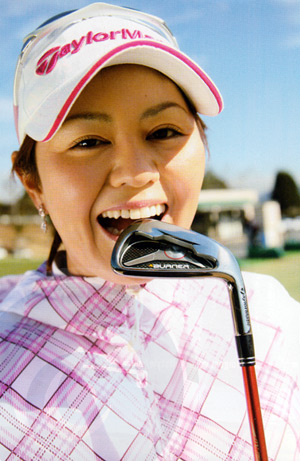 Last summer Taylormade Japan put a prototype soft cast Burner iron in the bag of JLPGA pro Shinobu Moromizato. She went on to win 4 tournaments in Japan with this iron which drew a lot of interest from golfers following the tour scene in Japan. In many surveys done with average and recreational golfers, when it comes to club and equipment choice, as well as fashion choice and even swing style, many golfers choose “emulating their favorite pro” as the number one answer. Because of this, Japanese brands, and US brands in Japan love to cater to the Japanese “Yen” by giving them products nobody else in the world gets.

As many of you know the soft cast prototypes played by Moromizato along with the prototype Tour AD iron shafts in candy apple red went on sale in December as the Taylormade Japan Burner TP iron. It’s still one of the hottest irons in Japan and what I say is TM’s best looking iron to date.

I spoke to our TM Japan rep this week asking about when the Burner TP as well as the R9 TP Forged would be added to the TM Custom clubs program and as of this point they still have not been added. I know many of you are waiting for this as I get several emails a day just asking when custom specs can be order. One of the reasons for delay is that all custom orders are built by TM Japan in their actual tour vans here. The TM Rep explained that start of the pro season here in Japan has also turned the Vans toward sponsored player support with limited resources for custom orders based on existing clubs in the program like the Burner Forged, R9 and R9 Max irons and drivers.

In the meantime we can check out some of Shino-chan’s (as she is affectionately known here in Japan) practice with the Burner TP iron as she does a step in weight transfer drill.