There are a lot of new 2012 Yamaha models to cover so I’m going to start today with the V Series, especially because it features the two limited tour models which always sell out very quickly. In fact the new V Forged Tour Model has already had all standard S200 shafted sets reserved at Yamaha within a day of the new product announcement. Yamaha has however put aside a few hundred sets for custom orders which is what we are ordering now (1200 sets in total made for all of Japan).

The V Series clubs in the Inpres X line are aimed at the pro player to better golfer or athlete golfer as we call it in Japan. The clubs are designed to not only provide distance but also control/workability and stability. All Yamaha clubs are forged at Endo which in turn equals great feel and quality as well as premium designs.  The new tour iron features a milled cross face for additional feel and bite resulting in improved spin control and performance. The Tour Model iron is compact and features a thin top line, sole and minimal offset. Some have even referred to the way the Tour Model sets up as neo blade like since the back cavity is almost like a small muscle, bringing the CG higher for a more stable and stronger trajectory. 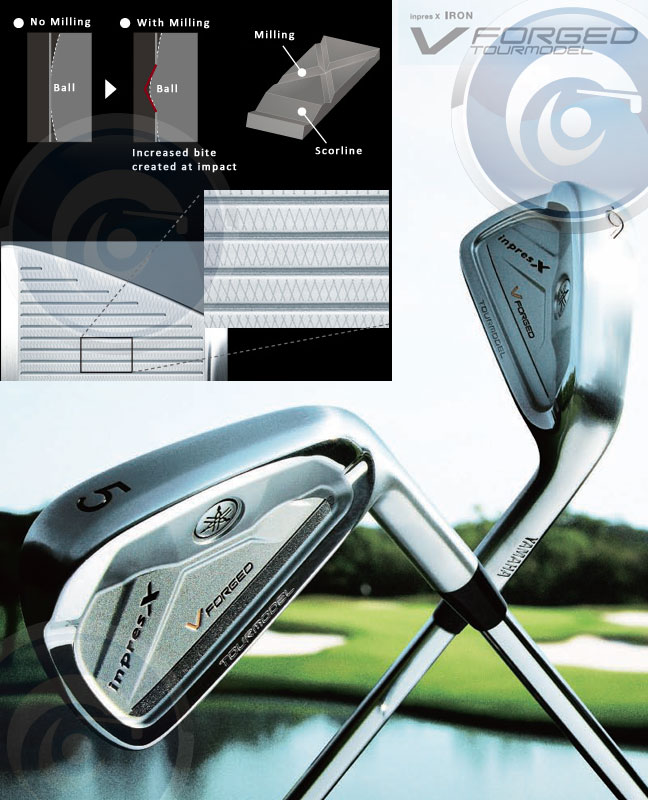 Since the Tour Model with standard S200 has pretty much been snapped up by golf shops around Japan, we have to offer them with custom shafts directly from Yamaha which is not necessarily a bad thing 950GH and 1050GH from Yamaha are no charge upgrades while Modus3 and KBS Tour are +15.00 per iron. PX is +40.00 per iron and graphite is also available in Tour AD Iron and Diamana Thump iron shafts. There is of course also the standard V Forged model which also has the milled X face but with a slightly larger head and more offset. The standard V Forged is aimed at the better player to mid capper and is not a limited model so readily available.

The new V202 Tour Model and V202 Standard Model drivers are 415cc and 445cc heads aimed at pro to better golfers looking for a strong and stable trajectory from a driver that produces premium soft feel. Both V models feature a higher and shorter CG with the 445 since it is the bigger head actually having the slightly deeper face.  All Yamaha drivers are forged from ELF Titanium and feature Yamaha’s newly designed for 2012 Ultimate face, a variable thickness cup face design which provides maximum ball speeds and one of the softer feeling impacts in golf. A chemically milled variable thickness crown works to provide optimal energy transfer and the head is weight for Yamaha’s R.P.M. design which creates a powerful more penetrating trajectory that out runs most other competing drivers. Penetrating trajectories with low spin is nothing new however Yamaha designed its drivers to actually launch higher at initial impact but peak out lower and hit the ground running. Meanwhile other low spin drivers launch lower but peak higher reducing carry and run compared to the Yamaha.  Both drivers are available 9 and 10* lofts with the Tour Model sporting a new Tour AD BB shaft and the V202 445cc a Tour AD LVII shaft. Upgrades of all kinds are also available including Diamana, Fubuki, Motore Speeder, Tour AD and Roddio.

All Yamaha models will be available for pre order this week in the pro shop and please keep in mind the limited nature of the tour models.

Here are the Yamaha videos for the new V Series lineups (high speed connections seriously recommended). The first video is an overlook of the lineup including its technology and comments from top pros. It is of course in Japanese but you can see and hear the clubs in action and pretty much the pros love the new line especially for the the feel.

The first pro interview is with top Yamaha pro Hiroyuki Fujita which features initial testing on the trackman from earlier this year. Fujita is not known to be a long driver but his final drive of the day reached 308y.