We all know that playing in the rain is tough. Besides getting wet and clubs getting harder to grip, the wet conditions affect the performance of both your golf club clubs and balls. What exactly does rain do to your performance? Golf Today and PRGR ran a very interesting test on club and ball performance in dry conditions vs wet conditions. Golf to Impress is glad to be able to present the results for your reading pleasure. 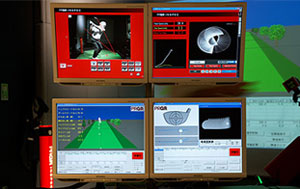 The test was done indoors to maintain consistency and take wind out of the equation. Because of this, results reflect how wet conditions affect clubs and ball performance and do not take into account a player or the hands and grips getting wet or as I said before wind. If those variables were taken into account, results would be far to erratic and inconsistent so they were factored out.

The test used PRGR’s Science Fit Launch Monitor, a very advanced swing and ball flight analysis system that PRGR uses for all its fittings and club testing. The system tracks not only ball data but also the complete swing of the player hitting the ball is captured and analyzed by Science Fit which is able to measure acceleration through the entire swing. In this test however only the ball data was looked at and not the swing. The tester was Accordia Golf’s Tojima Pro who has a head speed around 108mph. 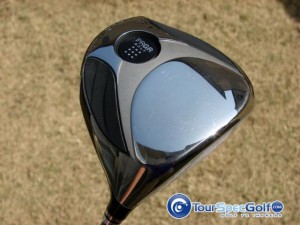 The equipment used in the test were the following:

For wet testing, a spray bottle was used before the swing to wet both the club and ball with water. This simulated the wet conditions of light rain on the ball at impact.

Make sure you click here to see the results!

The test results here are only to give an idea on what a wet ball and club might do. Of course the Wet results would probably be even worse if it were actually raining which would create even more resistance affecting carry and considerably less roll with the wet ground. The tests had three shots dry then three shots wet and an average of the dry and wet.

The test started with the PRGR 9* driver.

A quick glance at the driver results show that just a simple mist of water on the ball and driver head before impact cause the total carry to drop by an average of 8 yards (which would be even worse if it were actually raining as I said above) and the back spin to jump by an average of 700rpm. Even light wetting has a large impact on the driver where distance counts.

Once again an increase in backspin on the wet results this time by nearly 1000rpm which ends up affecting both carry and overall distance. This may not be so bad if you want hit your target and stop but if you are looking to gain distance with your fairway wood, the rain and wet will hurt.

The next test was very interesting as it looked at the golf ball particularly a control low handicap model the TR Spin with urethane cover versus an average golfer distance ball the Premium Red with ionoma cover. Please note that the test is not to compare urethane vs ionoma for distance results but rather how wet conditions affect their performance characteristics. In fact, the tester Tojima slowed his swing a bit for the distance ball to better represent the speed the ball is targeted at.

This first set of results was actually the same as driver results as it was using the 9* driver with TR Spin ball:

The second set of results are here with the Premium Red Distance ball and a 10.5* GN502 Tour.

So what do these ball results tell us? It seems the design of a distance ball in this case the PRGR Premium Red with Ionoma cover is not affected much by lightly wet conditions. While spin went up a bit it was still at a level where the ball carried even more than the the dry ball and club but it did not roll as much. Results were very even with the distance ball while the spin control ball, the urethane TR Spin was hurt a lot more by the wet.

Now moving on to the wedges where spin is everything and we all love lots of it when it comes to attacking the pin around the greens. The wedge tests were done with an imaginary target 50 yards out. So looking for more spin so that we can stop the ball on the spot, what does the wet do to performance?

First the Grind Studio Prototype 58 with grooves* 50 yards to target:

These results clearly show that wet conditions and wedges will result in considerably less spin 3500rpm or so less making it harder to control the ball and attack the pin. 50y out from the pin the dry conditions allow accurate max spin shots right at the pin while wet conditions created a higher shot, less spin and over hitting the target with no spin back.

Now the Grind Studio Prototype 58* with NO Grooves:

This test with no grooves showed a couple of things in both dry and wet. Firstly how important grooves are (^_^) of course. It also showed that soft forged wedges even with no grooves have some bite. Some say the softer the material the more friction it causes on impact (Yamaha a while back went with S10C wedges!). As you can see in the dry results with NO grooves, the backspin numbers are almost as much as WITH grooves in WET conditions due to the friction created by the soft steel. Control with no grooves is obviously not as much and the ball overshoots the target.

Now add WET to the equation with NO grooves and the wedge looses all traction and spin. The ball pretty much slides off the wedge and balloons up way overshooting the target.

So these are all interesting numbers to look at. They not only tell us that there will be performance differences in dry and wet conditions but also that there are equipment considerations to keep in mind ie what ball to use, what kind of grooves on the wedge or materials, and even what lofts. This test again was done in a controlled environment with just water on the ball and club. But it definitely makes us think.

By the way here is what a wedge with no grooves looks like! 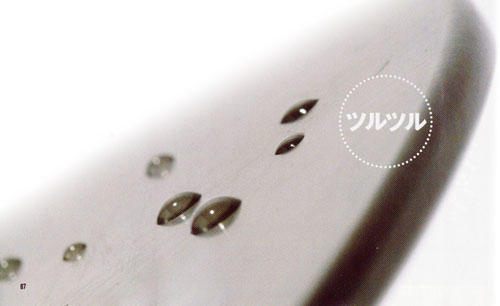