in Golf News, Golf Opinion, GTI Exclusive, Image of the Day, Industry Insider, What's in the bag?
382
VIEWS
Share on FacebookShare on TwitterShare via Whatsapp

Our featured customer today is Rob Harrand who is also know as Mjr. D on the TSG Forum. Rob was kind enough to write up his own introduction and save me the work so without further delay here’s one of our favorite customers, Rob Harrand!

First of all, I’d just like to say thanks to Tario, Chris and everyone who contributes to making TourSpecGolf a fantastic business, website and forum.  It’s definitely one of a kind… full of great people (and hopefully golfers!)

My name is Rob Harrand.  I was born in a city called Regina, Saskatchewan, Canada.  Yes, Regina is pronounced the way it shouldn’t be. Ha!  I’m the youngest in a family of six.  I have three older sisters but unfortunately no brothers and no one is a golfer :(

Baseball was my first love growing up.  Instead of dragging around a bag full of sticks on the course, pretending I was Jack Nicklaus, I spent my youth firing baseball’s into fences, pretending I was Nolan Ryan.

By the time I was 11, it became apparent that I had a gift.  I was able to fire a baseball faster than most adults.  Pitching in the Major Leagues was my dream and getting the attention of scouts that early in life, was definitely encouraging… perhaps my dream could one day turn into a reality!

I grew up with a very natural, fluid, effortless delivery but by the time I turned 14, it was already beginning to disappear.  As it is in Golf… Baseball and more specifically, pitching, is an industry full of contrasting theories and opinions when it comes to the “mechanics” of the pitching motion.  I had no idea at the time, but all the instruction and coaching I was receiving as a teenager would end up seriously impeding my development and progress later.

Too many “experts” began attempting to (unnecessarily) change the natural mechanics of my delivery (similar to what Tiger Woods is going through right now) and what that did was not only waste valuable time, it caused me to become far too aware of my “mechanics” (paralysis by analysis) and stymied my fastball velocity.  In pitching, velocity is what gets you further, faster, than anything else.

When I turned 17, I dedicated myself to pitching more so than ever before.  I had to do something to get myself back on track.  I rented an old Bingo hall and transformed it into my own personal pitching center.  I was able to find a local pitcher who had experience playing down in the US… I worked with him diligently for two years as we attempted to get me somewhat back to my natural pitching mechanics.

Through thousand of long winter hours doing mechanical drills, throwing, video analyses, strength training, etc… come summer of 1999, I was able to get drafted in the 42nd round of the Major League Baseball Draft by the Los Angeles Dodgers.  42nd round isn’t great, especially since I was able to throw 90+ MPH at the time, but coming from a place with a three month baseball season and very limited exposure… it wasn’t bad. 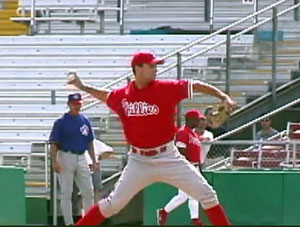 I didn’t sign with the Dodgers, as I got a letter in the mail from San Diego State University, a Div.1 college.  They were interested in having me go to school there as a pitcher on their baseball team.  What was very strange about this letter compared to others I received was that is was signed “Rusty Filter” – Pitching Coach – SDSU Aztecs.

My dad owns a business in Regina called “Aztec Industries”.  Strange coincidence but not nearly to the degree that one of his main products is something called an Aztec “Rust Filter”.  Long story short, I had booked a trip to pay a visit to a Jr. College in Santa Barbara, CA on a particular weekend in July, 1999…  ironically, this was the only weekend of the whole summer that the head coach of the SDSU Aztecs – Jim Dietz, was going to be in San Diego.  Again, long story short, my parents and I met with him and he offered me a full scholarship on the spot.  Pretty cool!

I headed down to San Diego, California at age 19 to become a pitcher for the SDSU Aztecs.  It was a very difficult transition (coming from some place named Regina, Saskatchewan to a hotbed of the baseball world in California).  I stuck it out and although I definitely didn’t reach my potential (mainly because I was still so caught up in “mechanics”)… three years later I was drafted in the 9th round of the Major League Baseball draft by the Philadelphia Phillies.

I signed with the Phillies,  got a pretty nice signing bonus, treated myself to a car that I always wanted and headed to Batavia, NY to pitch for the summer.  I ended up doing well enough to be invited to the Philly’s post-season “Instructional League”, in Florida –  A league dedicated to developing “prospects.”

It was there, that would alter the next two years of my life. 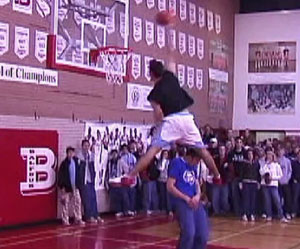 I woke up one morning and for the first time in my life, it hurt my shoulder to throw a baseball.  Several cortisone shots, ice, running, rotator cuff workouts, sprints, stretching,  medication, and many worrying hours, later… I was no better.  I had a chronic muscle impingement in my shoulder that would not go away.  As a result,  I was released by the Phillies in the early summer of 2004.  It was a very difficult time as everything I geared up for since I was 11 years old (to one day pitch in the major leagues)… vanished into thin air.

I flew home to Regina, took a year away from baseball, went back to college and played on the college basketball team.

From 2005 to 2006 I spent a lot of time in the weight room.  Although the time away from baseball was good for me, I decided to pitch for a local team that summer and lone and behold, my arm didn’t hurt anymore!  Best of all, I started throwing a few miles per hour faster than I ever had in my life, so I decided I had to give baseball one more shot.  Unfortunately though, later on that same season, I hurt my shoulder again.  Shortly after, I flew down to LA to have a minor shoulder surgery (debridement) then headed to Tempe Arizona to rehab.

It was in Arizona that I fell in love with Golf and not long after… I discovered TourSpecGolf… the rest is history!  My first order was an Epon Technity 9.5 with a Roddio Pentacross X flex shaft… along with a smorgasbord of wedges!  I fell in love with J-spec right then and there. 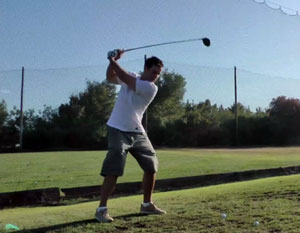 I spent a lot of my downtime in Arizona golfing (and eating).  Baseball was still my focus but golf became my hobby.

I finished my rehab in time to join the Ottawa Rapids Professional baseball team (CanAm League) in the spring of 2008.  However, when I flew up there and got back into the routine of professional baseball, I found out my personal desire for the game was no longer there. After a long talk with my family, I decided it was time to hang it up.

“Since then I’ve spent the last 2 1/2 years focusing on my golf game and developing a company dedicated to helping pitchers/players of all ages reach their potential in Baseball. It’s called “Mind-Body Alliance (MBA) Baseball” – www.mbabaseball.com. It’s a one of a kind Baseball player development company that consists of a team of highly qualified professionals dedicated to maximizing a player’s potential in all facets of their development, both mentally and physically, on and off the field. 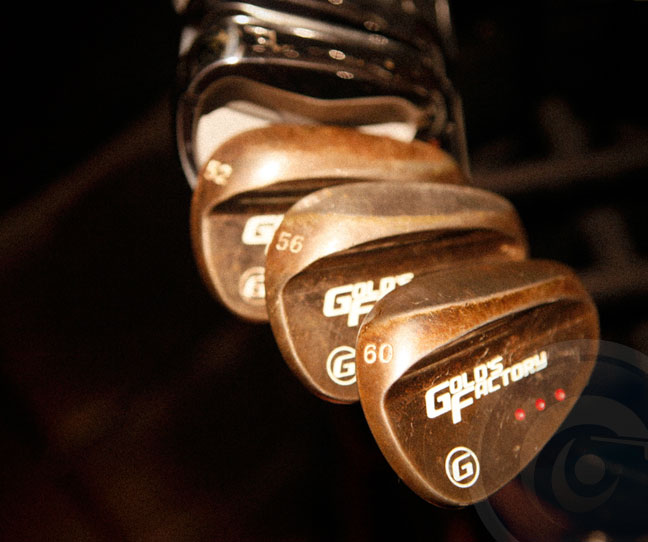 Golf is now my passion.  I fully intend to play it as long as I live and become as good as i’m capable of.  I actually went to Mesquite, Nevada this past March with a long time friend and former Milwaukee Brewer’s pitcher, Eric Thomas, to compete in a Long Drive Qualifier.  It was a great time and I plan on continuing to compete in it.

For those of you who asked… my swing speed with a 50” long drive club has been measured as fast as 150mph.

What’s in the Bag

Right now i’m about a 10 handicap and I play Epon 302’s with Matrix Program 130 shafts as well as Miura Mb-5003’s, Nippon Super Peening Blues and Mizuno Mp-37’s with KBS Tours.  My Driver of choice is the Crazy FX-435 with the Crazy Black 50 XX.  My fairway wood is the RC 14* BBD Tour VS with a Crazy Black FW XX.  My hybrid is a Tourstage X-UT with a Crazy Utility X.  My wedges are custom Gold’s Factory’s with DG spinners.  I also recently just ordered the 2011 RC hybrid, a Sky Dream Jump type bite wedge and 2011 Onoff Forged irons.  I’ve gone through a ton of different equipment over the years (just like all of you guys, i’m sure) and my current setup is definitely my favorite!  I think the golf industry is starting to consistently make some really great stuff and no better place to buy it from than TourSpecGolf… helpful and honest a staff as you could ever hope for! 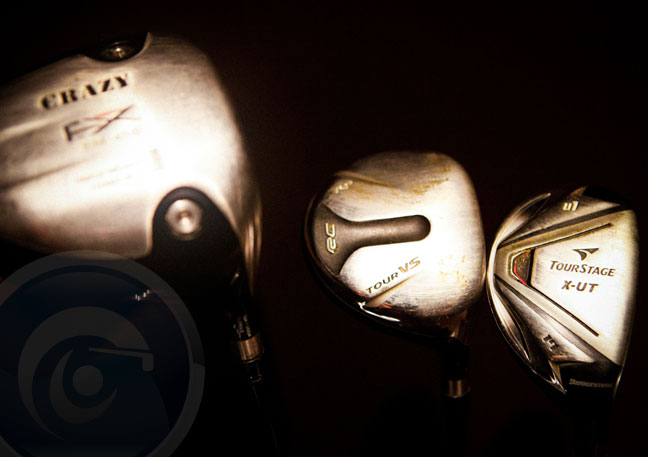 Thanks Tario, for giving me the opportunity to be featured on your blog.  I look forward to every single update you have.

Best of luck with your golf games, guys!

Check out Rob’s Reality Pitching Website Promo Video which features Rob in action in all 3 sports!