Nobody in the golf industry even comes close to the success that Yuji Numazawa has had in his career in regards to golf equipment design. No one…

Payne Stewart, Seve Ballesteros, Greg Norman, Bernhard Langer, Gene Sarazan, Lee Travino, Jose Maria Olazabal and that is just a fraction of the players who used his handmade equipment back in the day. This is Numazawa-san’s story… 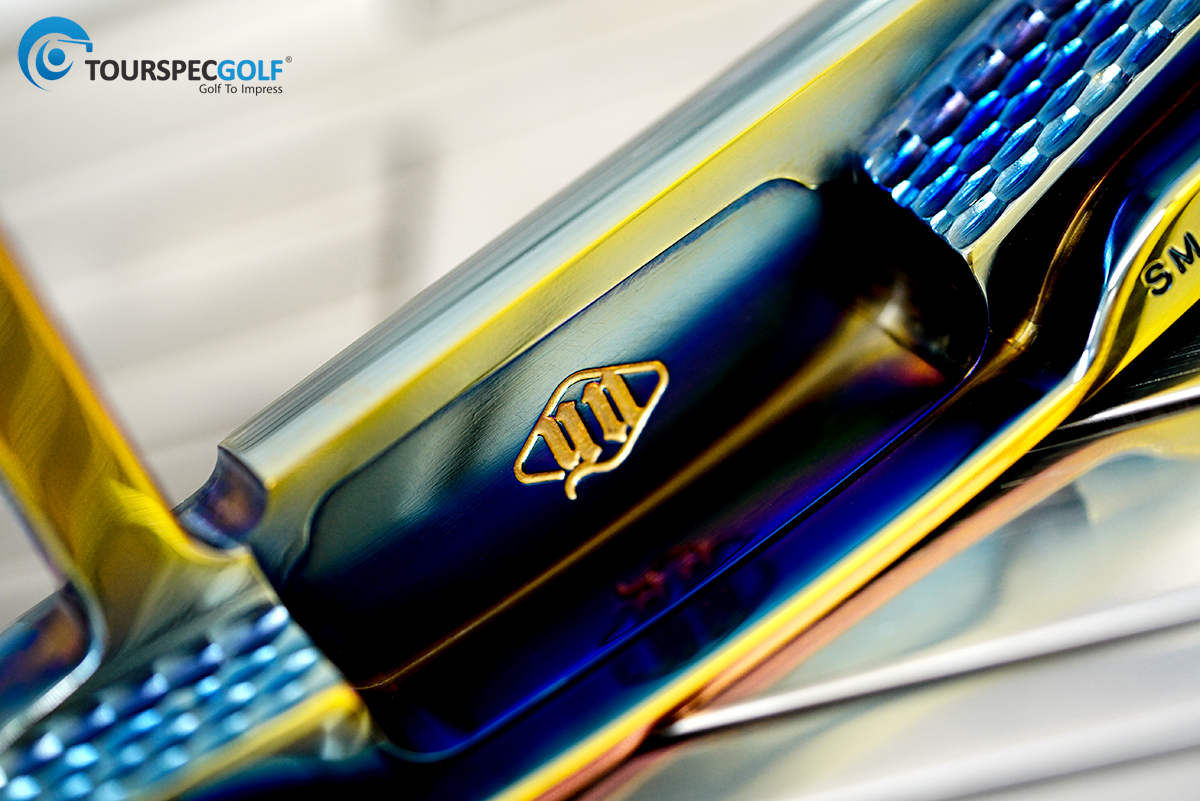 In 1970 Numazawa-san was the chief designer and wood grinder for Honma Golf. He climbed the ranks in the company and became a valuable asset when tour players in Japan began to notice the beauty and shape of his persimmon woods. He was the tour rep on the Japan tour for many years. One day he arrived to work with many Japanese players lined up for his clubs after they learned that Gene Sarazan had them in play. Immediately after this, his designs were in 90% of the Japanese players not under the Honma name, but as one-off custom made hand ground wooden clubs with no marking other than his initials. “YN”

Lee Travino was the next American player to use his equipment back in 1975 and following Travino, Gene Sarazan who played the YN driver and spoon asked that Numazawa-san travel to the Masters as his guest in 1986. When Numazawa-san went to work and shared the good news with Honma golf, they didn’t want him travelling to the states to work outside of the company name. At the time, Honma Golf was not in the business of sponsoring tour players. So Numazawa-san quit his job and got on a plane to the United States. 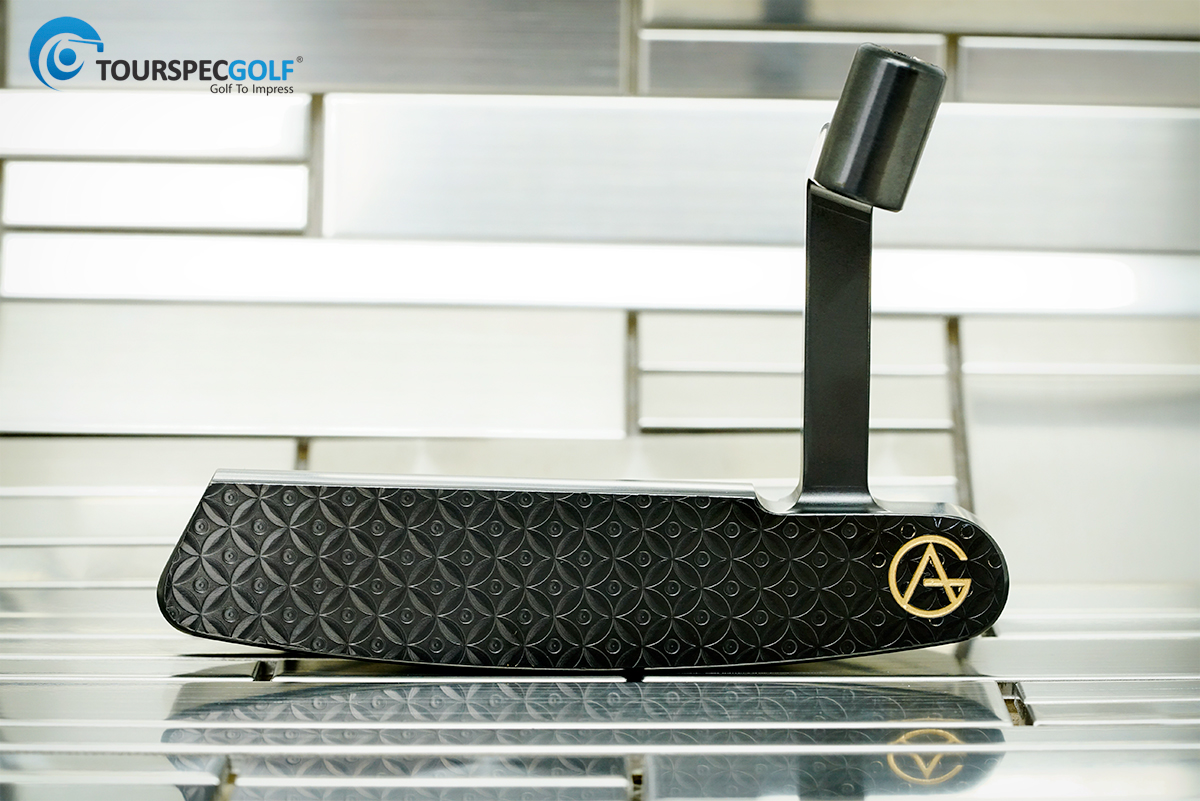 Shortly after, business really took off for Numazawa-san when the famous international talent agency IMG contacted him to make golf clubs for most of their top players. His next job was to travel to the British open with Payne Stewart making and adjusting his clubs to his exact requests.

The following year at the masters, Solheim Karsten said something to him that would forever change his life… He said, “Putting is a different game. Although you have mastered creating the perfect club, you will never create the perfect putter. It’s a different world.” These words were buried in his mind for many years after.

Numazawa-san travelled the PGA tour for 1 year and when he returned to Japan he was famous for his work with Payne Stewart and other famous American Golfing Legends, so many companies were trying to hire him. In 1986, he met Yukihiro Yamanaka the founder of Bridgestone who shared a similar philosophy when it came to golf & life as Numazawa-san.

At the time Bridgestone’s golf division was making Spalding golf equipment yet still had no great woods to offer. Numazawa-san entered a 20-year non-exclusive contract with Bridgestone and at the same time created his own design studio in Azabu Japan for tour pros to come to him directly for their equipment needs. His studio was not open to the public and he designed only prototype clubs for professional use only.

His final works with Bridgestone was called ACCESS, super expensive non-conforming clubs for the senior player. This was during Japan’s hay day and these are still the most expensive golf clubs in history at $300,000 USD for the full set. 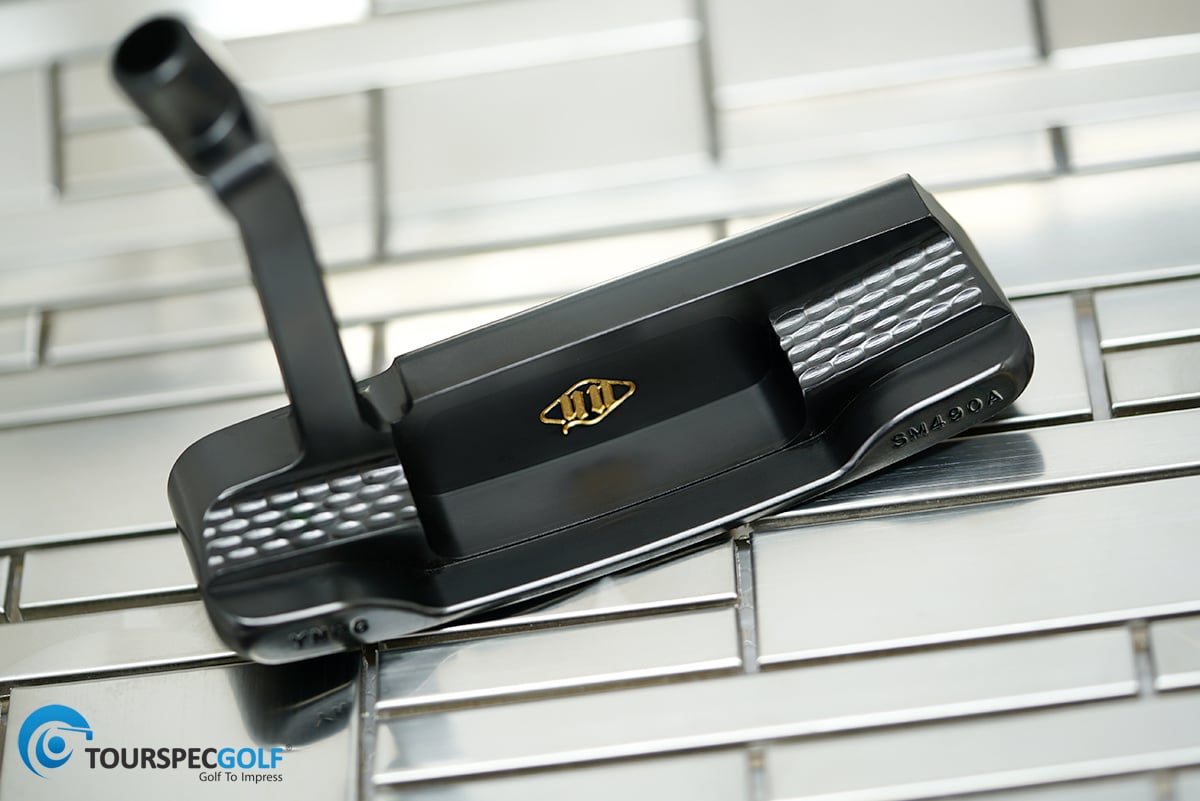 In 1997 Numazawa-san closed his design firm and stopped making tour pro’s clubs. He worked strictly for Bridgestone on the ACCESS line in 2004. In 2006, he decided to stop making golf clubs when the equipment rule changes began to take place. He also had his own TV programme with NHK andDavid Leadbetter around the same time. He was with Bridgestone Golf from 1986 – 2006. 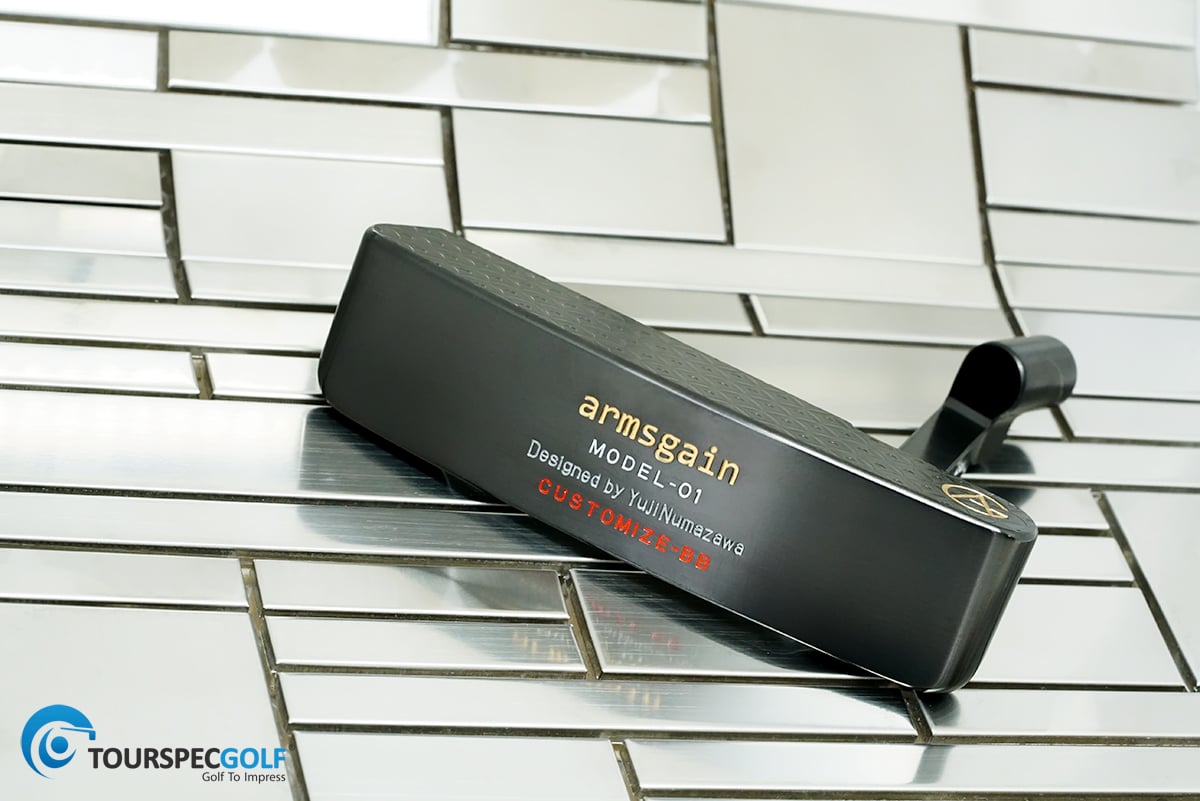 From 2006 until 2015 Numzawa-san didn’t produce any golf clubs and was basically in retirement. Now he is looking back remembering the words Karsten Solheim told him. (“Putting is a different game. Although you have mastered creating the perfect club, you will never create the perfect putter. It’s a different world.”) Numazawa-san in his life has made the woods for the best players in the world by hand. Even irons and wedges that were used by Greg Norman, Payne Stewart and many others. Golf brands in the 80’s and 90’s contracted “YN” to produce clubs for their golf tour professionals because of the beautiful shapes and details of his designs. Now his dream is to come full circle to finish his life by creating an amazing putter. Introducing the Armsgain Model – 01. 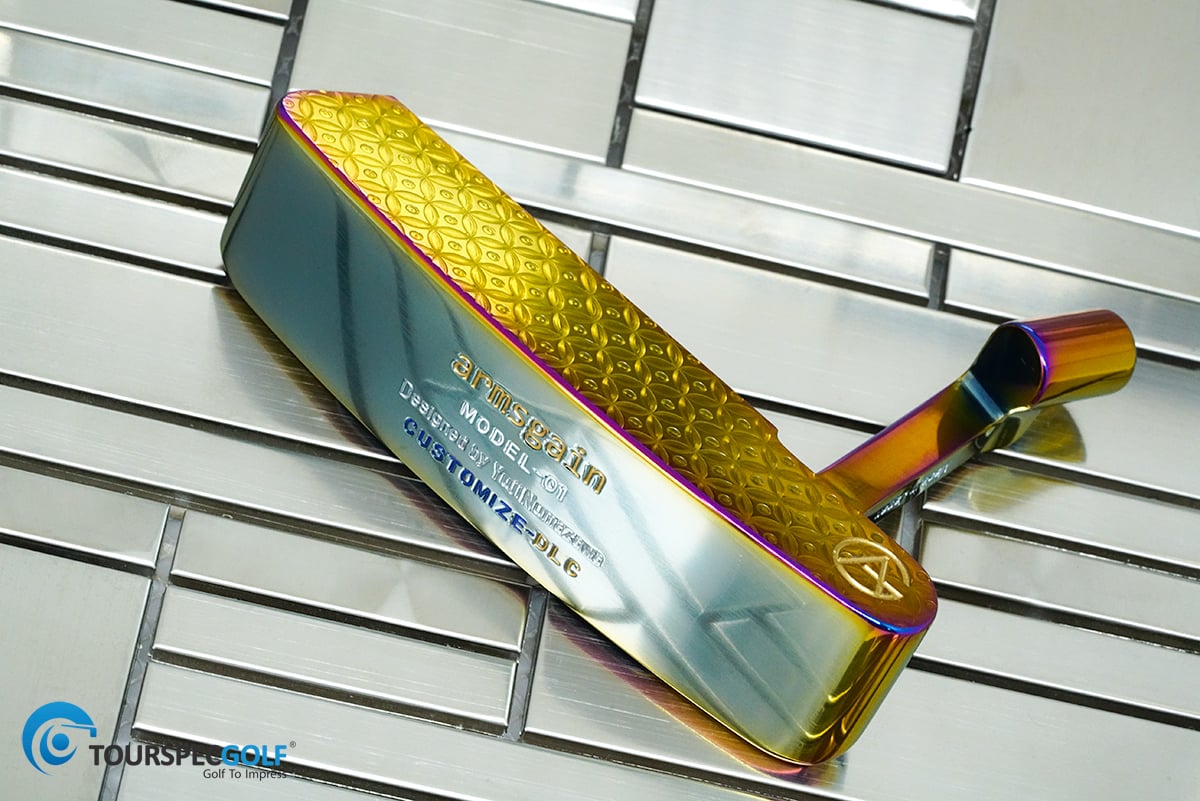 I’ve posted previously about this putter after Numazawa-san was introduced to me by a Himeji manufacturer and good friend of his. I had no idea about his history for many months. I simply said it is a nice looking putter and we would be happy to help. It’s a brand based on a single product and I was blind to its shape until I learned who Yuji Numazawa-san was. Last week, I invited him to my apartment in Tokyo where we sat down and he shared his story with me. I was shocked and honored as TSG already had a relationship with this man yet didn’t know enough about him to give his product the credit it deserves. Is it psychological now that I look at his putters shape a different way? Now I see it’s not a normal anser design. There are subtle shape differences that make it unique. It’s an original design all of his own made 100% in Japan. It’s face isn’t so deep. It has a profile slightly longer heel to toe. It is a perfect 350 grams and made of SM490A. Why SM490A? Keep in mind this is the only putter he will ever produce and he chose what just happens to be my favorite material for the reason that it’s not so firm and not so soft with the ideal sound. I’d like to think that great minds think alike ;) blah! But anyway, his Model-01 now comes standard in black boron with optional NiCr Satin or a Sumitomo DLC finish that is the thinnest finish in all of golf. DLC = Diamond Like Carbon

TSG will be updating the Armsgain Model-01 listing in the store to offer all new finishes, we appreciate you reading the story of Yuji Numazawa-san and will keep you updated if and when he decides to add to the Armsgain label. 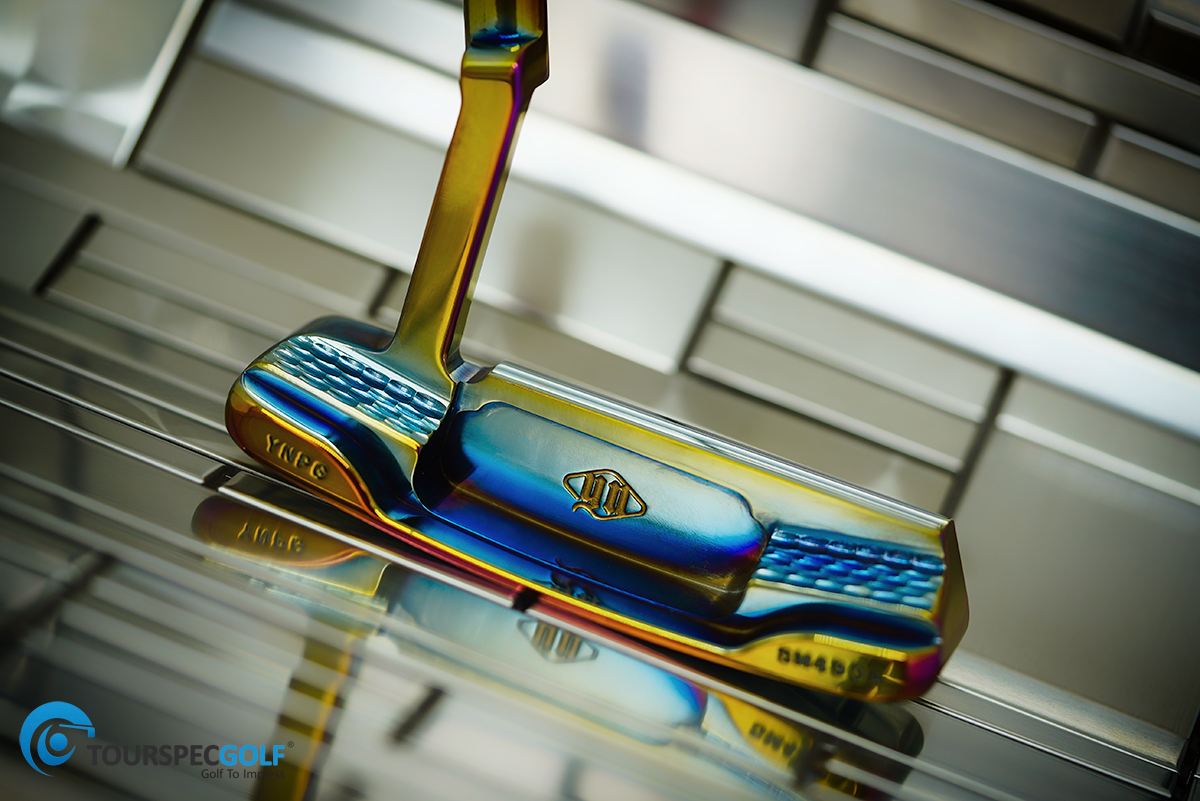