About a month ago ONOFF provided TSG full access to their special and limited LABO SPEC RB-247 cavity back and Pro Spec fairway wings utility clubs direct from the Tour Van in Japan. I wanted to do a blog post comparing what in my opinion are their two top mid capper to pro level CB irons in 2011. The 2011 ONOFF Forged is produced of S20C at what I consider to be the best manufacture of golf clubs on the planet Endo mfg. It’s soft, pure at impact, and very forgiving while the RB-247 fits right in between the ONOFF Red and ONOFF Forged providing the ease of use of the ONOFF Red but the control and performance of the ONOFF Forged.

The RB-247 may look like the red at first glance but it won’t take you long to realize it’s a smaller package with a lot less offset and a much thinner top line and sole. LABO SPEC is ONOFF’s custom build division which is known to be critical paying extreme attention to detail when building and crafting their special devision clubs. The LABO division clubs are built to order for each individual customer. We also offer the standard models built by the LABO team which allows you to get custom specifications and options for any model. 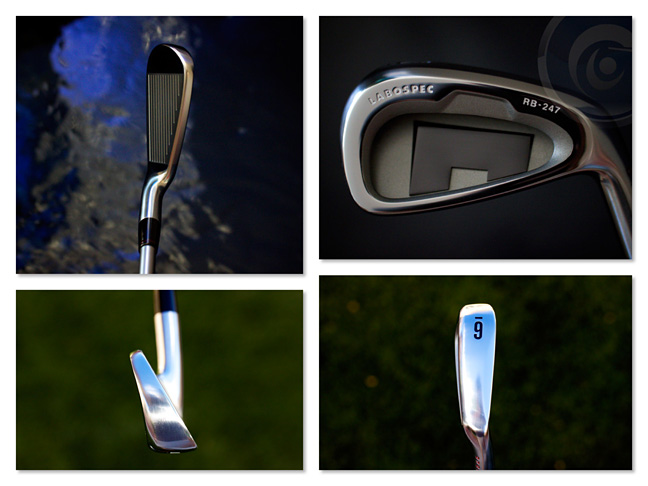 Above are images of the RB-247 as you can see it’s designed for the better player yet features many forgiveness packed attributes such as good sized under cut cavity, full perimeter weighting, and a customized leading edge and sole grind for easy entry and exit into and from the turf. I put it up against the ONOFF Forged on the range and left that day feeling confused to as which one I would rather play…

Above you can see some pics of the ONOFF Forged and Here’s my take when comparing the two of them. The ONOFF Forged feels better at impact and I knew it would coming into the testing, It’s just such a pure addicting feel even not struck dead center I consider it a total game enhancer as it makes decent shots “feel” like they were struck perfectly. The Forged feels better than 99% of the other ENDO irons I’ve hit. It’s forgiving and prior to hitting the RB-247 I thought I didn’t need, want, or desire anything more forgiving, Thats until I tried the RB-247. The RB-247 is stupid easy to hit, I will say that it’s the MOST FORGIVING semi players CB on the market, maybe ever. It doesn’t feel as pure and soft as the Endo produced ONOFF Forged but it’s got a very stable muted meaty behind the sweet spot sensation off the face and when struck perfect a sorta rebounding effect that comes with it. For the score I should be playing the RB-247, for my addiction to feel it’s the ONOFF Forged.

On the left we have the RB-247 Labo Spec irons and on the right the ONOFF Forged. As you can see the RB-247 has a more rounded tear drop toe while the Forged model has a more boxy and In my opinion more playeresque toe. My theory behind this is that the tear drops are more forgiving and the boxed in style more workable. From initial test impressions the RB-247 flies just the slightest bit higher than the Forged.

I already have a set of ONOFF Forged Irons with NS950’s and the test set of the RB-247 that Daiwa sent me compelled me to order the RB-247 for myself. I ended up order 2 sets one with the Labo Spec Repulsion Kick ST-120g steel shafts and the other with the Roddio I-10 graphite with a custom white and black shaft color. Oh yea that’s another thing I should mention, order the Labo Spec from TSG and you have the option of custom grip colors and custom shaft colors.

Below our image gallery, all non comparison pics are of the RB-247 the others show the ONOFF Forged side by side. Stay tuned coming later this week my impressions of the Labo Spec Fairway Wings Utility, the same UT that Shingo Katayama is currently packing.