I posted the first part of the Driver White Paper last week, a survey done by Golf Today comprising of 350 random golfers and their driver trends. Today I’m going to talk about some of the other results such as what influences players purchasing decisions and what brands and new models really stand out to those 350 surveyed golfers.

As I had noted in question 4 from Part 1, 287 golfers said they were satisfied with their current drivers. The survey actually goes deeper and asks the player the key point of that they are most satisfied with. 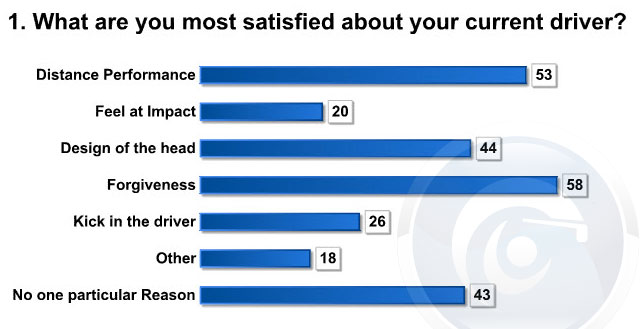 Then results are quite spread out with forgiveness actually edging out distance. However it’s possible distance comes from forgiveness and distance also equals a forgiving driver. About 44 people went with design of the head meaning looks still count in the books of many.

Next was a list of the 20 most used drivers among the 350 players. They did not list actual numbers used however the names on the list are of interest as they range from 2005 models all the way up to new 2010 models:

One of the reasons why there are many older models in that list is the availability of used clubs in Japan. The fact that there are so many used clubs available also means that the turnover is high and supports the observation that Japanese golfers change clubs a lot, at least a a large portion will every 1-3 years. 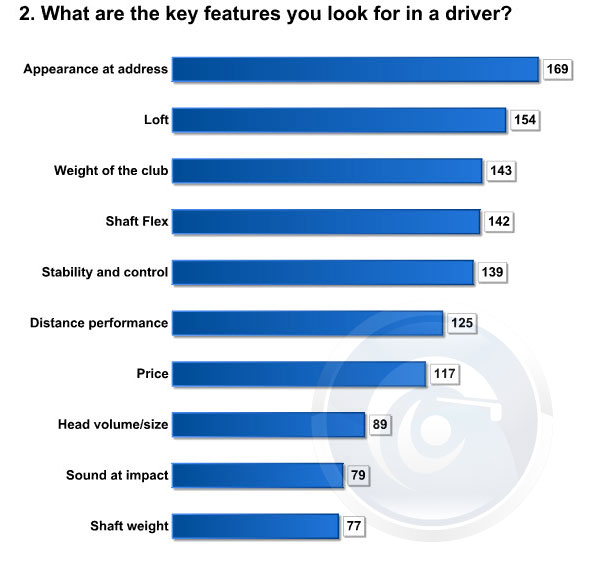 The number one important characteristic was look at address while distance was number 6. Price was down at number 7 and only a important purchasing factor for 117 of the 350 people.

The next question is an interesting one. Players were asked to pick which brands they like and they could choose more than one. This question does not necessarily have to do with which brand driver the player currently owns but rather based on new models and offerings as well as reputation, which brands appeal to these players the most. Please note they only listed the top 10.

Titleist Japan took top honors here and the feedback from most was their image of producing high quality clubs. The Japanese seem to always want something with foreign brand whether it be BMW or Benz or Callaway or TM. And the foreign brands take advantage of this with top quality Japan only products like the Titleist VG3, Callaway Legacy and TM Japan’s Japan only forged irons.

Next they asked players if there currently was a driver on the market that they wanted to buy. 140 players said yes and 210 said no. Please note that this survey was done back in August so certain models were not announced yet or available. Golf Today asked the players to name which one driver they were interested in buying. 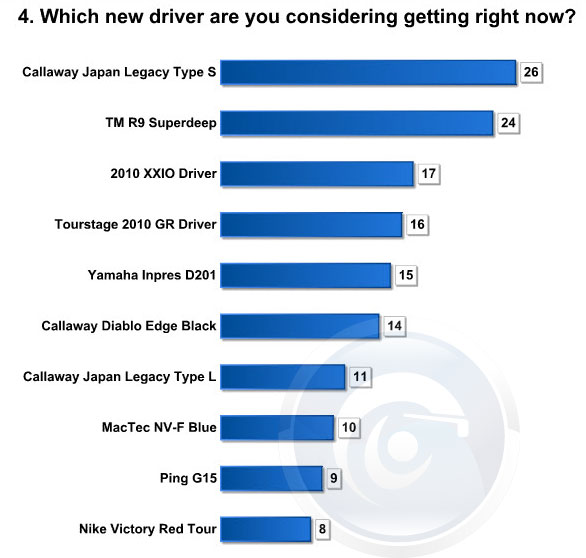 The results were a bit surprising considering Titleist was named the favorite brand yet not a single Titleist driver made the top 10 of desired drivers. I was honestly surprised to not see the VG3 driver here in this list considering how popular its been in Japan the last 6 months.

So how about you?