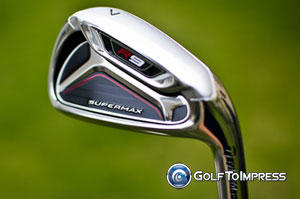 The R9 Supermax Iron features long and mid irons with a 2 piece undercut cavity design and shorter irons in a 1 piece design with no undercut. The long irons feature a 17-4 body and a custom 455 face while the 8 to wedges are all 17-4 SS.  The irons do have some offset especially in the longer irons which becomes progressively less as the irons get shorter. The lofts are ultra strong with a 23* 5 iron again showing a big focus on distance.  This is not a tradition undercut in that it has an open pocket cavity. It is in fact a hollow cavity and face filled with foam and a plug behind the sweet area of the face. These features are used to create vibration dampening and soften the feel at impact. The back cavity is pretty good looking and does feature TM’s inverted cone technology. 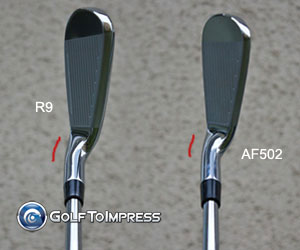 Back when the lineup was first announced I called the Supermax iron mid sized. Now that I’ve received the Supermax clubs from TM for testing I realize that I was visually fooled into calling them mid sized, and that’s a good thing. One of the biggest complaints about higher handicapper or so called game improvement irons is usually their bulky size and enlarged dimensions and offset creating an awkward balance and appearance at address. The shovel appearance of game improvement irons is often enhanced by a huge goose neck or in simple terms too much offset. The new R9 Supermax iron is NOT like this at all.

I realize now that when I looked at initial pictures the Supermax iron, the pictures gave the illusion of a smaller head thanks to having less offset and very balanced dimensions. Even when I first pulled the 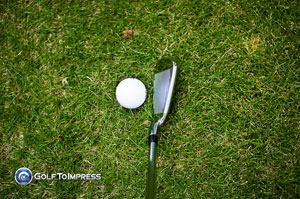 iron out of the box I said hmmmm size is not bad. But when I put it side by side with Epon’s AF-502, a more mid sized cavity the R9 Supermax was indeed bigger all around. The key here is that the R9 Supermax is very proportional. The offset is in fact very similar to the Epon if not less even! Because of this the head on it’s own doesn’t look large at all. For the average golfer who still wants maximum forgiveness and class leading distance but not a huge chunky look this is a huge plus. As you can see from the picture with a ball at address, the Supermax iron looks pretty good compared to most average golfer higher handicap models. Definitely prettier than the Burner Superlaunch. 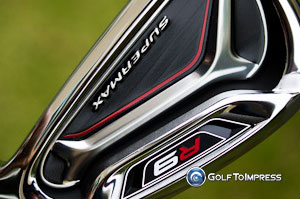 On to performance. As I mentioned the lofts are very strong on the Supermax. We’re talking a 23* 5 iron and 43* PW. This iron is made to hit it high and long. An easy swing launches the ball in the air and it just carries. I brought along my Yamaha V Forged 7 iron (32*) to test along with the Supermax 7 iron (29*) and the Supermax was higher launch and longer by a good 10 yards which is about right for that 3* loft difference. This means the slower swinger does not have to go to a longer harder to hit iron to achieve the same distance.

While the Supermax obviously has the V Forged beat in distance, it won’t be rivaling a one piece forged iron in feel anytime soon.  Feel is subjective and some players might like the slightly more deadened feel especially those with aching joints and those who don’t strike the sweet spot consistently. The foamed and plugged cavity of the R9 Supermax dampens vibrations well and off center hits don’t rattle the hands. Miss hits also don’t lose much in distance.  The face is on the larger side and the sweet spot appears pretty big. It’s especially longer heel to toe which is very helpful for the average golfer which misses side to side towards the toe or heel. The CG is placed low so those who pick the ball can still catch the ball low on the face and have good success. 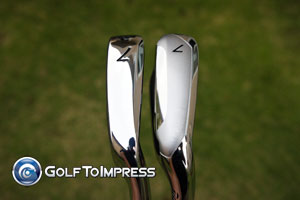 The sole of the Supermax iron features a blunt leading edge with trailing edge relief. It’s not a super wide sole by any means but is bigger than a mid sized cavity as you can see with the side by side picture with the AF-502 (Epon on the left). The R9 Supermax sole is also two tone in finish. At first appearance one might think it has a tungsten sole but on further inspection it’s just a different finish for aesthetic purposes.

The R9 Supermax is an automatic iron made to go straight and far. Attempts from me to draw the ball sometimes resulted in pulls, but that’s probably just me. This iron is best with an easy swing as it simply wants to go straight. Lately, manufacturers have been sending me both steel and graphite demos to test. This iron excels with the Motore Supermax graphite. It’s a small upgrade over steel but you get a considerably lighter iron(-45g) and you don’t lose much in stability but you do gain feel and distance.  The graphite shafts launched even higher and carried even more than the standard NS Pro 950GH.

I’d recommend this iron to Taylormade fans who are still improving at golfing or those who want automatic style distance. It’s reasonably good looking and provides enough confidence at address without looking huge.  Far and straight, isn’t that what we all want? You can check out the conforming grooves R9 Supermax here in the pro shop.