Our first brand recap from this years Japan Golf Fair is the every popular Taylormade. The last couple of shows has seen an all white booth, with all white lights, staff members dressed in white and all white clubs. Some may say its almost like being in a hospital but one thing is for sure, the way Taylormade can market and produce clubs, is in some ways like the medical precision of a top surgeon. They know how to create an image as well as release clubs everyone wants and are interested in. The Golf Show was no different as whenever TM was ready to make a presentation event, spectators as well as press/media would gather at the TM booth like no other. 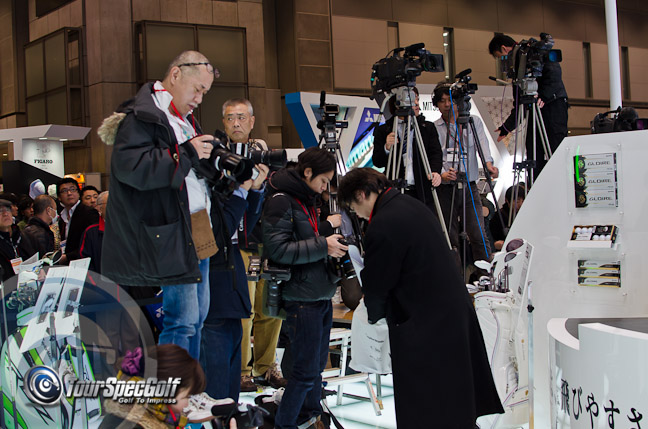 The great thing about Taylormade Japan is they know how to attract the paying golfer in Japan and that is by releasing a lot of options for golfers to choose from. Not only does Japan get all the TM models the rest of the world does, every year they also get Japan only Taylormade clubs. So for those from outside of Japan, I can say the usual suspects were at the show including the new R11S and Rocket Ballz lineup, and the new Ghost Tour Putters and ATV stainless steel wedge. So what does Japan get so far this year that the rest of the world doesn’t? 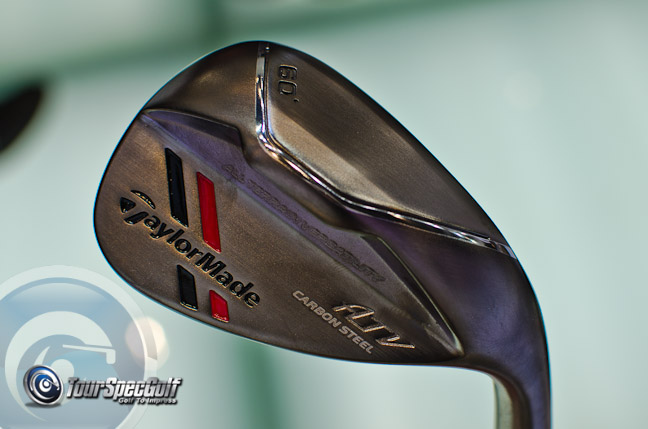 The new ATV wedge is marketed in Japan by Taylormade under two models, a stainless steel head model, and for Japan only, a forged head model.  Both models share the same design and All Terrain Vesatility sole. They share the same specs, same micro milled face, as well as pretty much the same graphics. The differences are, the Japan model is forged from soft carbon steel and finished in a dark Smoke IP (Ion Plated) Finish vs the cast stainless steel ATV model in a tour Satin finish. The Japanese have an obsession with forged clubs and Taylormade always seems to oblige (though we are still waiting for word on Japan only forged irons). We’ll have both ATV wedges for side by side testing but there probably is no doubt the carbon steel model will feel softer.  Our pro Tatsuro told me he preferred the look of the Smoked IP carbon steel model as its dark finish creates contrast and frames a white golf ball very well. 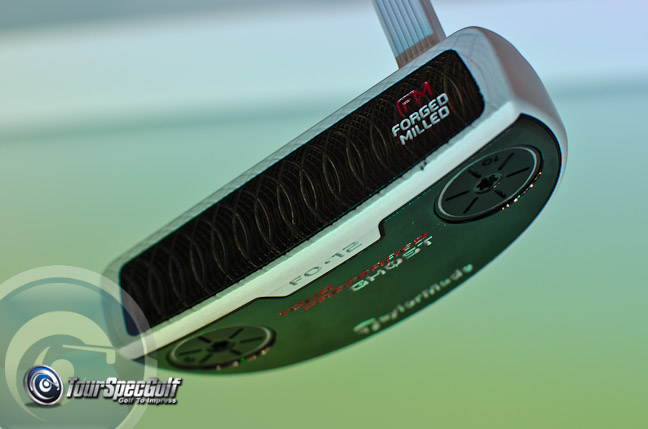 Taylormade seems to love giving Japan exclusive and limited edition putters like the Itsy Bitsy Ghost Limited. This year while Japan gets the new stainless steel Pure Roll insert Ghost Tour putters like the rest of the world, it also gets a new forged and milled premium S20C carbon steel Tour Preferred Ghost model which is designed to produce the ultimate in roll and feel. There will be 4 shapes which also utilize interchangeable weights like the Ghost Tour. The Daytona-12, Maranello-81, Fontana-12,  and Monte Carlo-72 all featuring the new FM face. The model above is the Fontana-12 and in the top banner for this post you can see the back cavity of the TP Ghost putters. 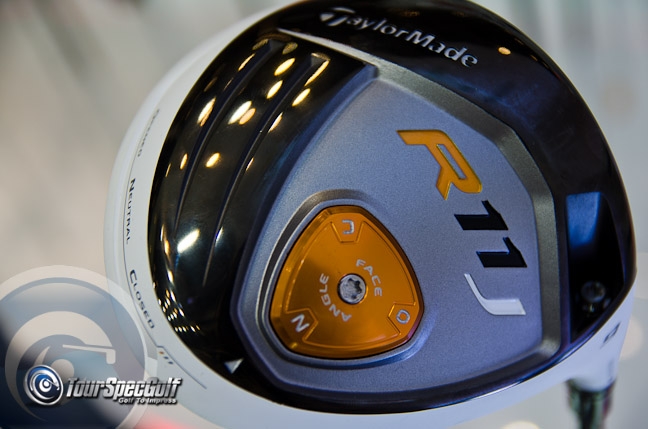 Taylormade Japan in the past has always tweaked its flagship driver into a more forgiving easy to use model for the average golfer in Japan.  Like the R9 Max and R9 Supermax which were Japan only models, TM will also release an all new R11J model which like the R11S, is a 460cc head but with ease of use and a focus on distance and forgiveness. It provides the Japanese golfer who wants to tweak and tune with the Adjustable Sole Plate as well as Flight Control Technology but in a simpler to use and swing package. The ASP sticks with a triple adjustment versus the 5 way adjustment in the R11S to keep it simpler. A higher MOI as well as lighter overall club weight also point towards more ase of use. The bulge and roll of the R11J are increased to create more gear action to help average golfers recover from off center hits by still going as straight as possible.  An overall friendlier setup with higher trajectory for max carry. 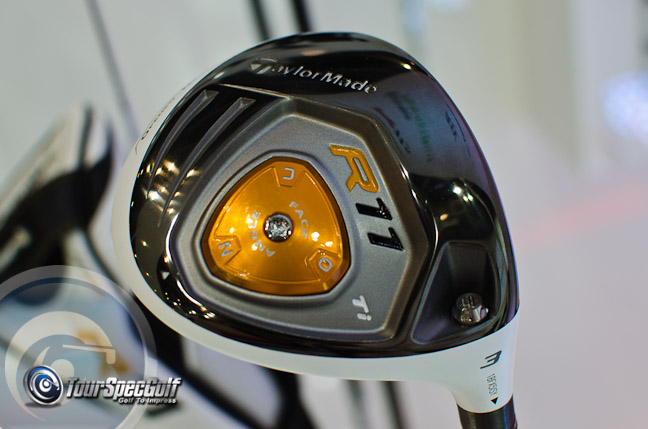 The Japanese seem to always crave titanium fairway woods and will not hesitate to pay the additional costs associated with producing  a Ti FW. Taylormade knows this and always seems to oblige with various Ti model fairway woods over the last decade. Titanium produces a hotter driver like feel and is preferred by many average golfers in Japan who want more distance and ease of use. The R11 Ti FW, which will be released along with the R11J, is the larger head fairway wood, light weight and hot titanium face and body that Japanese golfers embrace. Besides the softer feeling impact the R11 Ti FW is 16g lighter than the typical R11 FW.  The 3 wood is also 20cc larger than the standard R11 FW. All in all, these features mean better feel and more distance and forgivness for the average golfer. 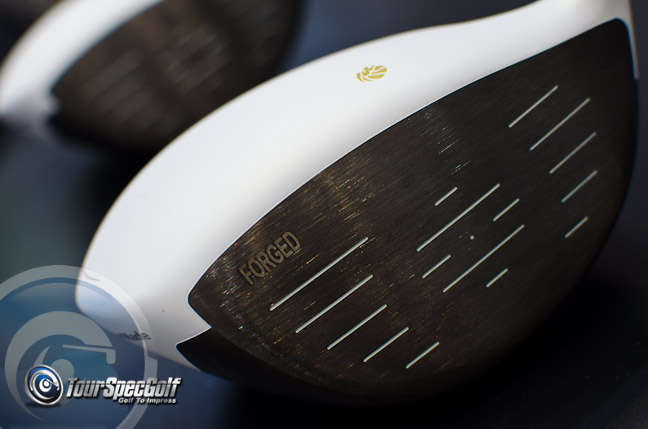 Finally there was the new GLOIRE lineup. As those who know french Gloire means Glory and while Taylormade Japan has named the lineup using the French name Gloire, they do in fact pronounce it gu ro re. The Gloire line is Taylormade’s new premium lineup which in a way takes it a level up from its previous XR Japan only line. Appealing to golfers who want premium design, materials and performance, Gloire clubs are also made for ease of use and big distance. The big draw of the new Gloire line up is its new Forged alpha beta Titanium driver.  The Gloire forged driver is designed for not only premium feel but big carry and big distance thanks to a 46.5″ club length, ultra light club weight (280-292g depending on flex). It of course has FCT, as well as a weighted tuning port which controls trajectory by altering the CG. The Gloire and its tuned inverted cone technology face creates a sweet spot 20% larger than the previous generation ICT face. 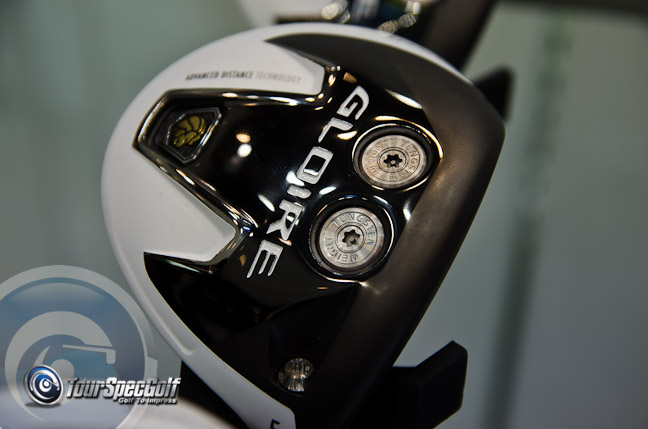 The Gloire lineup also includes an all titanium fairway wood with an even larger head than the R11 Ti FW. The Gloire 3W sports a huge 195cc head and again is designed to be ultra lightweight with maximum distance in mind. Even at 195cc, the face is actually on the deeper side making it excel both of the deck as well as the tee. Because of this, it doesn’t look overly huge at address (see below in the link to  pictures in our Taylormade Japan Golf Fair gallery for examples).  Even the 24* 9W is a whopping 175cc which is in fact the same size as the R11 Ti FW 3 wood.   The Gloire FW features very low CG thanks to two large tungsten weights which makes it very easy to get the ball in the air for big carry and distance.  However the weighting is kept forward in the head to keep spin under control for just the right balance of carry and run. 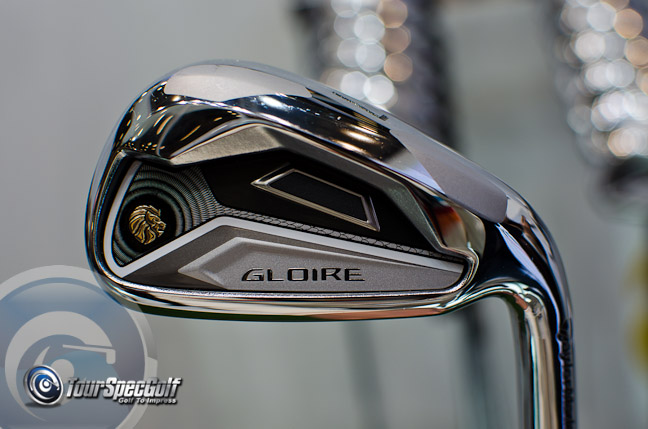 As many of you who read the blog know, maraging steel has been gaining popularity in high performance golf clubs over the last decade. Soft forged like feel, hot Titanium like performance but lower cost make it very attractive for manufacturers to use in their irons which a lot more material is needed. The new Gloire irons do indeed feature a thin maraging steel face matched with a soft 450 stainless body.  Tungsten in the sole creates a very low center of gravity, increasing MOI and ease of use and forgivness. The Gloire iron is again made for easy launch and big distance.  The ribbed maraging face produces soft feel but high ball speeds and a huge sweet area thanks to a pocket type cavity. With its light 50g range graphite shaft we’re talking ultra light weight for irons and very easy to swing and lots of confidence with its larger head and offset to help square the ball.

There were also new Gloire golf balls, a Gloire utility iron (which I somehow missed taking pictures off!) and a women’s Gloire lineup as well.  Overall some pretty nice clubs especially for the average golfer wanting more distance and more forgiveness. For the better golfer interested in JDM gear, they have the TP Ghost as well as the ATV Forged wedge but as I said above we are still crossing our fingers for an R11 and R11 TP forged…. Most of the new products begin launching late March and early April so look for the pre orders in the pro shop to reserve!

I’ve uploaded over 120+ pictures of all the new Taylormade Japan clubs from the golf fair so please visit our gallery to check them out! 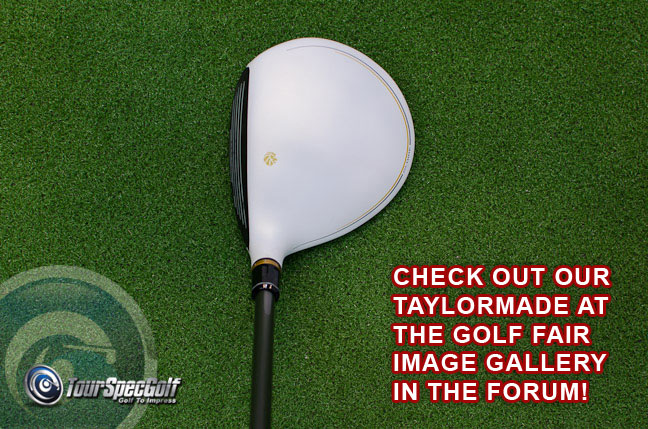